Is there a workbench "type" reference?

I currently use a cheap plastic and metal workbench that is both old and showing its age. As a result, I want to build a better bench. The only problem is that my research is turning up that there are many styles of workbenches that have been used over the years and if I know its name (say Roubo), I can google "Roubo Workbench" and get all the info I want and more about that particular design. However, I have seen lots of different pictures and there does not seem to be many names associated (at least that I can find).

So, is there a reference that shows what various workbench styles are? If such a reference exists, bonus points if it compares them to help me decide what exactly I want.

If you read the woodworking forums there are two classic books on the subject of workbench design in English and I think both compare features and usefulness a you're hoping. The first is by Scott Landis, The Workbench Book, the second by Christopher Schwarz, Workbenches: From Design And Theory To Construction And Use.

People seem divided on which of these is the better, if you're really interested I think you should read both. A local library may have one or the other if you're lucky so you wouldn't have to buy both. It doesn't get mentioned as much (don't know why) but The Workbench: A Complete Guide to Creating Your Perfect Bench by Lon Schleining must also be mentioned.

If you go into Amazon and look up any of these three you'll see further related titles in the scrolling list under Customers Who Bought This Item Also Bought if you really want to delve into this deeply.

I would caution against doing much further research on this at the moment however*.

Don't you need bench now? So my advice would be to build one now.

Whatever it is, no matter how simple the design or how basic the materials or construction are, it's sure to be miles better than the cheap metal & plastic bench you were using previously. What you build won't be perfect, accept that. But it doesn't have to be for the bench to work, and work well. Just make it heavyish to heavy, give it rock-solid joints to prevent racking, have the top flat and level and everything else is gravy.

There's a dirty little secret about almost all bench types, they all work. This is somewhat obvious if you give it some thought but it's worth emphasising: THEY ALL WORK.

People tend to forget this or ignore it in their quest for the 'perfect' workbench (there isn't one). In some other parts of the world they don't even use workbenches and they manage to get stuff built, it's well worth bearing that in mind when agonising which is better, a face vice or a leg vice!

Here's Chris Schwarz writing on this subject, The Mistakes of First-time Bench-builders on Popular Woodworking.

*It's all too easy to fall into the trap of over-analysing bench design, and getting paralysed by all the choices ("paralysis by analysis" it's called).

Most of us have been there! Pros and amateurs alike, comparing and contrasting design features, weighing the pros and cons of various wood choices, what joints to use (you can waste weeks just on this!), what size the top should be and last but by no means least what height the top should be. Ideal workbench height just as a subject in itself is something there are endless debates about.

If you take any sort of European or American bench design from say the last 300 years and you made it it would do what it's supposed to:

Once you look at it this way it's easier to see how almost every bench fulfils the brief. And that the various features of one or another don't matter as much in practical terms as one might assume because any decent bench can allow for much the same..... if they didn't then people couldn't have used them or currently use them to produce various kinds of work.

Some people strongly disagree with this. Take the bench type popularised by Frank Klausz and Tage Frid as an example. As vital to their working philosophy and practices as the Continental shouldered bench was it must be realised that not having those same 'vital' design features didn't stop their American contemporaries from doing the same work. So one man's vital is another man's don't need it.

As you say, there is a ton of different options out there and it is hard to decide.

When making mine, I bought Christopher Swartz's book "The Workbench Design Book: The Art & Philosophy of Building Better Benches " 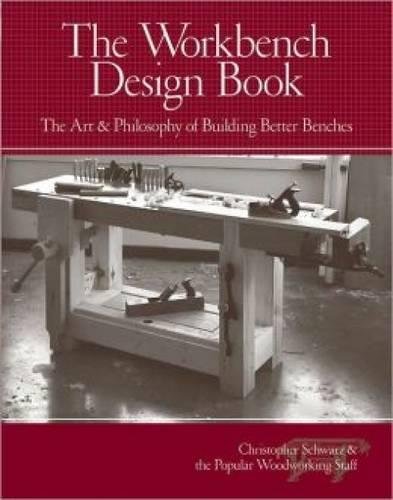 This book covers a ton of information on why benches are the way that they are, and things you should be taking into consideration when you make yours.

He also includes plans/breakdowns of about 10 different bench styles with a section from the bench owner (not always him), talking about it's strengths, benefits and weaknesses.

Ultimately I chose to build a bench not in the book, but I don't regret buying/reading it!

(I built the naked woodworkers nicholson style workbench - I highly enjoy using it!)

6
Small, Lightweight woodworking bench Styles
7
Mounting the top for a new workbench
2
Are some workbench features not suitable for a softwood workbench?
3
Using 1x4 instead of 2x4 for laminated workbench top?
4
Need help understanding workbench design and build process
1
Two piece workbench top
4
Need Advice on Building Workbench
2
Workbench better against or away from the wall?
1
Does a door make a reasonable workbench top?