I hope this question is not too general. I would like to make this table: 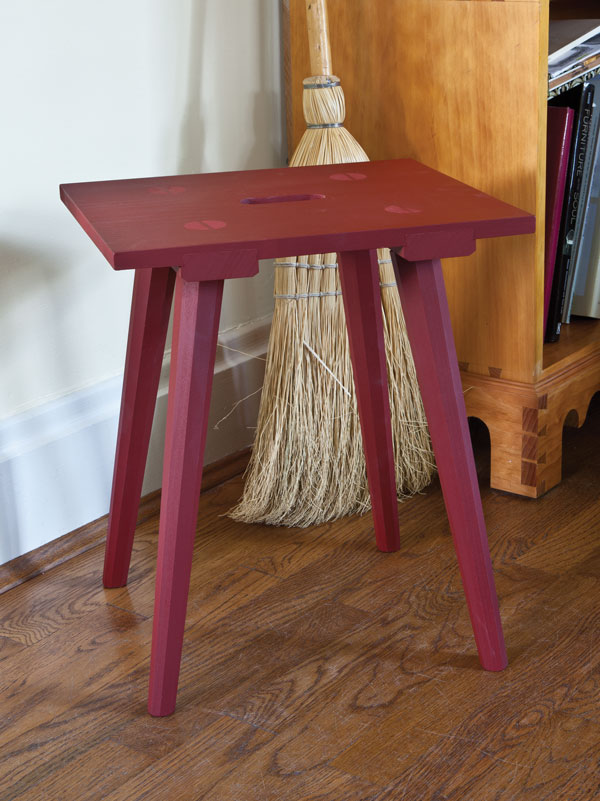 It mentions the dimensions : 1-5⁄8″ square at the top and 1″ at the bottom. One thing I was wondering is how legs are typically made? Do I find some larger square block of wood and cut it down? Or can I laminate some longer thinner pieces, since a 1-5/8 inch thick board is not easy to come by.

If I do laminate the boards, is there a straightforward way to then round one end (the top end) into a circle (so it can slide into the holes drilled in the stool top)? Something like a huge pencil sharpener maybe?

Thanks for any suggestions.

One thing I was wondering is how legs are typically made?

Unfortunately there isn't a typical way that legs are done, it's entirely down to the tools available to the woodworker and to some extend what they feel like using. For example someone might own a bandsaw but they wouldn't necessarily use it when doing every table or stool leg but prefer to do it using hand tools.

If a table saw is available and the user has made a tapering jig then the table saw is very often the tool of choice for doing legs because it's fast and efficient. Much the same cuts can be accomplished with a bandsaw by a skilled user, although they won't usually be as clean or straight and will require more cleanup to be considered finished.

But the same thing can be done using hand tools only, just as it was before there were any power saws. To break it down simply, you start with a square blank usually, plane down the taper, then plane down the corners to form the octagonal section (or plane to octagonal and then taper, depending on preference). An octagonal-planing cradle is a useful jig to make for doing this but not essential1. It's slower but you can clamp between two dogs, by clamping the workpiece ends with a long clamp and then clamping that down to the workbench, or clamping up and then putting the clamp in a vice as Paul Sellers likes to promote as his system is another good way to go if you have a vice on your bench: 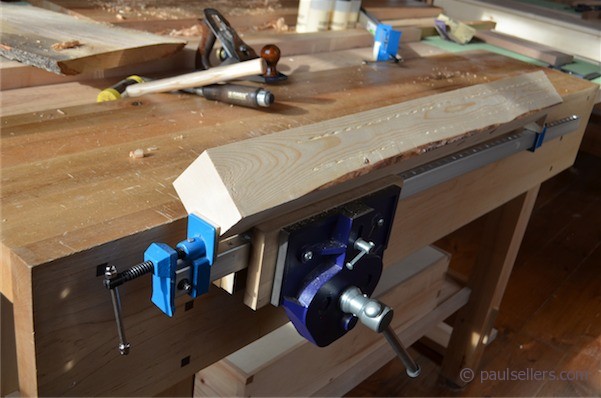 Do I find some larger square block of wood and cut it down?

You might find this useful, also on Pop Woodworking, Octagon Layout Made Easy

Or can I laminate some longer thinner pieces, since a 1-5/8 inch thick board is not easy to come by.

Yes you can do that, and it often it will yield legs that are stronger than if they were made from a single piece of the same species. But you must have good mating surfaces (flat and smooth) and they must be glued together well.

is there a straightforward way to then round one end (the top end) into a circle (so it can slide into the holes drilled in the stool top)? Something like a huge pencil sharpener maybe?

Yes there are such tools and they work exactly like a huge pencil sharpener. But for a single table you don't need one at all, you can do it just with some careful making out, a few saw cuts and paring with a sharp knife or chisel. Some practice is obviously a good idea to ensure good results but you can get an acceptable round tenon first time if you don't rush things2.

You can get the shape as close as needed by paring alone (going from rough cuts that remove chunks of wood to removing thin slivers when you're close to the finished profile) but you can fine-tune the shape to a near-perfect round profile using files or by sanding.

1 I'd highly recommend taking the time to make one if you'll be doing this even semi-regularly. The time it takes will be offset by time you save doing just a single set of octagonal legs by any vice or clamp method. Couldn't find a picture of one sorry but it's described well in Robert Wearing's The Resourceful Woodworker which I highly recommend if you're into jigs and other woodworking aids.

2 The first rounded end of something I made was to fit a ferrule on a file handle handle and it was about as good as any I've made. And actually my second set made some months later were a little worse because I was over-confident and rushed things!

To cut the taper in the legs on your table saw, make a jig to shuttle the stock along the fence. The one shown below is two pieces of 1 x 4 screwed at the top end in contact with each other, at the bottom a spacer is used to provide the desired taper. I'd add a clete at the bottom for safety and repetition. To cut the bevels, rotate your saw or add chamfer to the jig.

I'd just trim the round tenon by hand, you'll already have it at the octagon stage. Use a rasp and a long piece of sandpaper you can finish with as if shining shoes old-style.

Be sure to shape your legs a bit long both ends and trim-to-length as the last step. 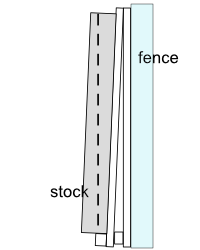 Not the answer you're looking for? Browse other questions tagged technique furniture traditional-techniques table-making or ask your own question.

0
How to make LARGE wooden dowels?

14
How to cut the centre out of a large round of wood
12
Quick corner joints in practice
4
How to cut round corners on a 4x4?
5
How to build a double X table leg
2
Is standard box joinery sturdy enough for a hollow table leg?
3
Design: Adjustable/Collapsible Wooden Table Leg
5
90° notches into side of thick dowel legs
2
Pocket holes for fixing chairs?