I am looking to build a TV stand like this: 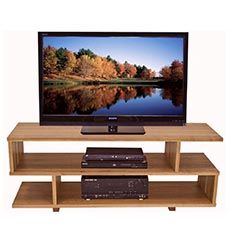 but I have been trying to find a way to hide the end grain. I found this stand on Crate & Barrel with dovetail joints, but I am not nearly skilled enough to cut all those dovetails! 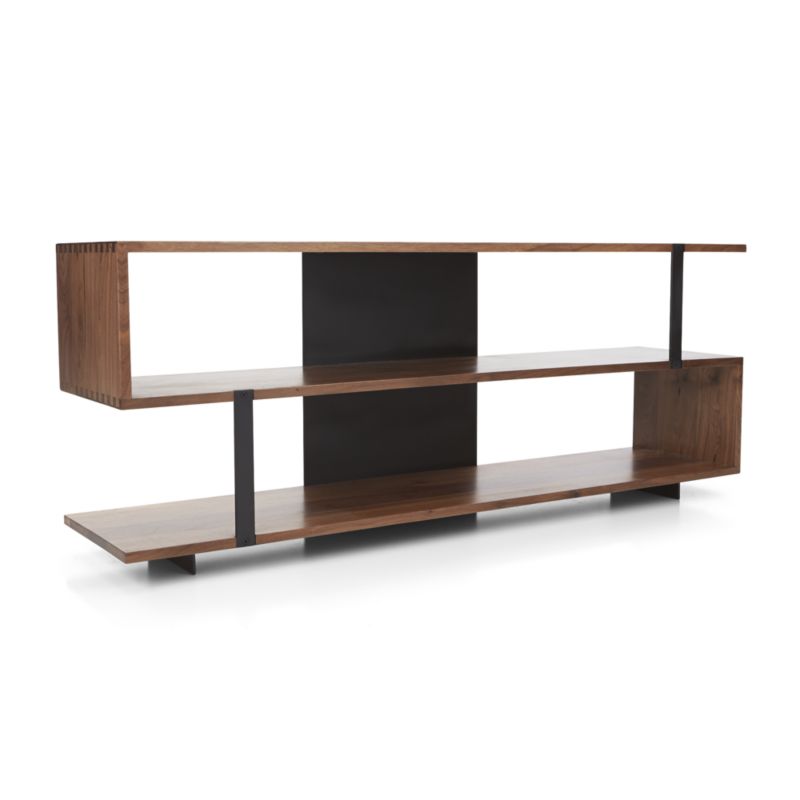 Could the dovetailed joints on the C&B stand be replaced with doweled miter joints like: 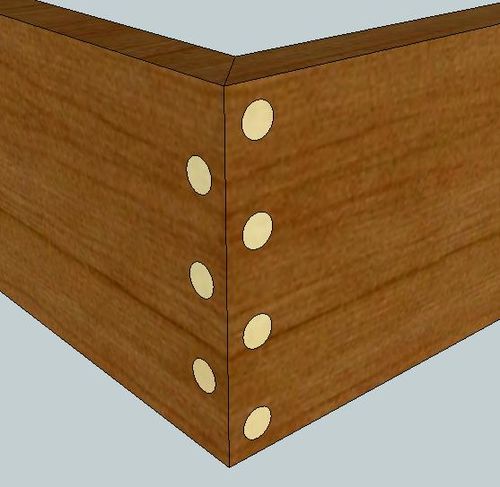 I would keep the other two butt jointed vertical supports as well (and maybe route shallow grooves in the horizontal boards for the vertical supports to fit in). I could also include a board on the back of the stand like the C&B model.

I plan to use 1x8 (joined into 1x16) pine for the boards and something like this walnut dowel rod.

There is a relevant discussion here as well. I don't have great access to a table saw, but this joint looks like a good contender: 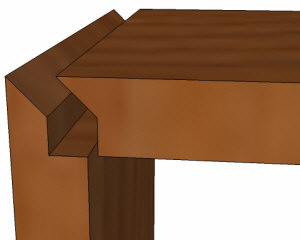 Also I found this table: 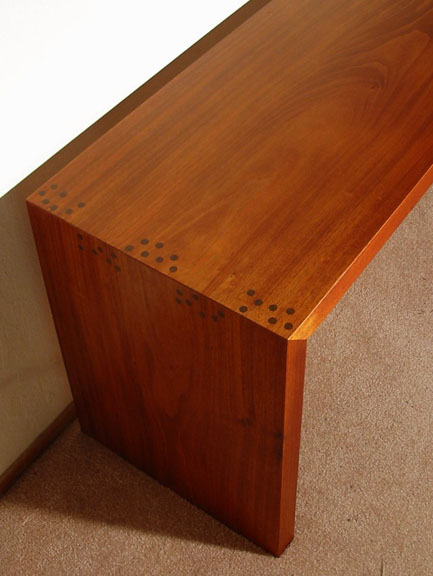 with a quick search, so it looks like there is precedence for this design, but I am concerned about the integrity of the joint considering there will be a TV on top of this stand. Will these joints, along with the other support pieces, be strong enough?

I have been trying to find a way to hide the end grain. I found this stand on Crate & Barrel with dovetail joints, but I am not nearly skilled enough to cut all those dovetails!

Dovetails don't hide end grain anyway, they make a feature of it so if you don't want to see any end grain they aren't the right choice. And by the same token neither would a box joint or finger/comb joint.

In theory yes, but in practice perhaps not.

The main problem here as I see it is not the joint you propose but that it's in pine. I regularly sing the praises of softwood and remind people that it can be surprisingly strong, but use in this design could well be expecting too much of it.

This isn't because it's pine, but because of the specific pine you're likely intending to buy. In addition to there being numerous subspecies of pine, which vary widely in strength, the faster you grow any softwood the weaker it is. And pine sold for building (2x material) is grown as fast as possible and is therefore often the poorest example of the species. While more utilitarian furniture designs built using it can be plenty strong, once you get into more experimental territory like this you're really pushing what the wood is capable of, both in terms of strength and in stability*.

Yes, do that. Regardless of what wood you used it would be a good idea. Housing the uprights like this will add a significant amount of stiffness to the overall structure, far more than you may realise.

*In addition to its innate weakness it is often not dried well (both too quickly and not taken down far enough as a rule, simply because neither are required for its intended purpose) and then on top of this it is frequently stored poorly where it's sold.

The short answer is that you should be able to get by with the doweled connection, but there are a few things you must consider to make sure. The first thing to consider is will your table support the weight of the TV and whatever else you put on it. You can determine this using the Sagulator to see how well the shelves will handle the weight. The weight should easily be transferred to the vertical legs in any of the connections you show. However, one further consideration is that each joint should also be considered as a potential hinge.

In your first photo, if a force is applied from the side, the entire table could collapse to the left or right side. The connecting joints must adequately resist the force. Dovetails, by their geometry proved great resistance to this rotational force. Box joints will also do very well. Both of those joints offer a great deal of connection surface area to resist the potential to rotate by virtue of the glued connection. Your dowels will also offer resistance, not so much because of the glue as by the strength of the dowel in resisting the shear and/or bending force. Note that the dowels will want to bend and this will apply force to the wood shelf and legs. The thickness of the walls around the dowel sockets is important. If there is too little wood in the leg face and the dowel itself, the dowel could tear out the surface. Making the legs thick enough or the dowels longer and of stronger wood will help. You can reduce the force at each dowel by increasing the number of dowels in the connection. Your last photo shows a thick slab with many dowels which will resist a lot of rotational force very well.

So how much is enough? This is a pretty subjective issue. There is no simple calculator and most folk learn from experience, copying the connections of others and sometimes testing the limits. If it were me I would use 3/4" or 7/8" hardwoods (for both beauty and strength). I would prefer dovetails or box joints, but if using dowels would use 3/8" dowels at 1 to 1 1/2" centers. I would also provide a back panel to reduce the stress of the connection joints.

15
When are pocket holes an appropriate joinery technique?
6
How to setup joint proportions?
13
Mortise and tenon joint proportions for 3 wooden beams corner
5
How tight should a dado joint be?
5
"T" joint with MDF—No power tools
6
How to hide base dados behind box joint corners
1
How to make a joint between two pieces of wood look good?
3
How to make a stronger butt joint where two panels meet
1
Doweled miter joint vs doweled butt joint