getting edge of plane square to sole for shooting

I just finished putting together a shooting board and have noticed that none of my hand planes have sides which are square to the sole (Stanley/Bailey #4 w/ corrugated sole, #5 1/4, #6, Wood river low angle block plane, Stanley sweetheart dual rabbet plane, Simmons #6--longer than Stanley/Bailey #5 but smaller than #6).

Which of these planes would be best for a shooting board?

A side flat enough that it doesn't rock is all that is needed.

The squareness of the edge produced is determined by the (adjustable) angle the blade edge forms with the side. The angle of the sole, as long as it's reasonably close (a couple degrees maybe) is not a principal factor.

So you can lay the plane on its side on a flat surface, and then just adjust the blade to where its edge is square and that will give you a square edge.

If you decide you must get the side square, one approach is to place a square (as in 90 degrees) surface next a sheet of abrasive paper, and hold the sole flat against the reference surface while rubbing the side on the abrasive.

This is a metalworking operation, and one might typically use an angle plate as the reference surface. https://en.wikipedia.org/wiki/Angle_plate 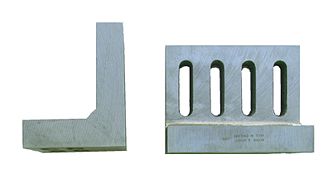 Lacking one of those, you would have to find the best 90 degree reference you can. Both the reference and the abrasive should be placed on a very flat surface, such as a piece of plate glass or perhaps granite tile.

This procedure may take quite a bit of time and elbow grease. I would start with a coarse grit, say 80, maybe 40 if there were a long way to go. After a few strokes, you'll be able to tell from the extent of the scratch pattern just how far out it is. You can progress to finer grits as you approach flat, or maybe not care much about the surface finish since it will only be used for shooting. It may actually work better if it has coarse scratches in it, as long as the very surface is smooth enough to slide without binding; some scratches may serve to hold more candle wax and make it slide more easily for longer between wax applications.

Others may know of alternate methods, but this one will work if you have the patience for it.

Which of these planes would be best for a shooting board?

Any of them other than the rebate plate.

Which size of plane to use for shooting is partly a matter of preference. Some like to shoot with a no. 4 because they're smaller and easily controlled with one hand, others prefer to use a plane that has more mass so use 5s or larger.

Note: for shooting board ends it can be very advantageous to use a larger plane because the greater heft can't as easily be stopped in its tracks by the resistance of the end grain in harder hardwoods. But sharpness of the iron and plane settings play a role here too — the sharper the iron is the better, adjust for a light cut, cap iron should not be positioned ultra-close to the edge.

Is there some trick to grinding the edges square to the sole?

You can get it much closer using the common lapping technique used these days of rubbing the plane back and forth on abrasive paper or cloth. The trick to improving squareness is that you can lean more heavily on the sole side or the opposite and you'll slowly remove more material there, beginning to bring the cheek to square. Then you just need to slog away until you're done (remembering to stop frequently to check for square).

You can also do this work with metalworking scrapers and file work. This requires some practice to get good results (filing in particular) but metalworkers tell us both are better for achieving a truly flat surface on a plane.

But however you tackle it it's actually not important to do on almost any plane.

The cheek doesn't need to be square to the sole
The lateral adjustment on a bench plane means that if the sole is slightly out you can compensate for it by adjusting the tilt of the iron assembly until its cutting edge is square to the sole.

And most planes will have cheeks that aren't so far out that this is possible.

Not critical even when jointing
If doing edge shooting for jointing purposes (making glued-up panels) it's not vital that a board's edge ends up perfectly square to the face, as surprising as that sounds. What matters is that the edges of each pair of boards are complementary angles. So if one edge is 89° and the next is 91° they'll meet just as well as if they were both at 90°.

In order to ensure that each pair of edges is at a complementary angle you simply need to plane one of them face up, the next face down.

Here's a picture that may help if you're having difficulty in visualising this. It's for hand-planed edges but the same principle applies (this is also applicable to using a powered jointer incidentally): 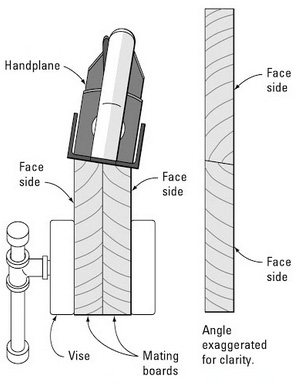 Source: The Complete Illustrated Guide to Joinery by Gary Rogowski.

If you can plane dead square, by hand or in a shooting board, that's great, but as you can see you don't have to sweat it too much if you don't.

Scanny is right. Just make sure that your off square variance is not more than the adjustment capabilities of your plane. My stanley 4 only gives a few mm on each side. ..

Not the answer you're looking for? Browse other questions tagged hand-tools plane hand-planing miter-joint or ask your own question.

7
Why would a plane have a grooved sole?
10
Getting flat surfaces with a tongue and groove plane
3
Most general purpose hand plane for limited budget
6
Stanley Bailey frog adjustment problem
2
Is this plane any good for anything?
5
How to make bottom face of beefy table leg flat and square with sides
4
Hand plane gouging wood even with fine adjustments
2
What is a router plane fence designed for?
4
How do I plane the edge of a board such that it stays square to the face?
1
How to preserve sole of transitional plane