What is the name of this joint?

I'm looking to make a table with a removable panel, which would require a joint something akin to a dovetail joint. My question is, what is this called, and can I buy wood precut with it?

I've attached a hilariously bad drawing of what I need. 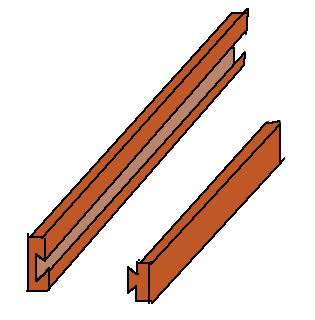 In modern US parlance that is a sliding dovetail.

In British parlance it's a dovetail housing joint. Older American books may refer to it that way too.

More specifically your drawing shows a through sliding dovetail or through dovetail housing since the groove isn't 'stopped', or shorter than the piece that slides into it.

Note: the housing portion, the groove (dado in American), is usually cut into the sides of a bookcase or other casework, and along the edge of the shelf that it mates with. So it's important to note that the grain commonly runs perpendicular to the joint, not parallel to it.

Both stopped and through versions of the joint can have a dovetail on one or both sides.

can I buy wood precut with it?

I don't believe so unless it's part of a complete piece of kit furniture with these joints milled out ready for assembly by the buyer.

If you need to form this joint it is quite straightforward and fast to do with a router, which in theory can cut the dovetailed groove in a single operation (in practice, especially on harder woods, the centre is often milled out first using a straight cutting bit to relieve stress on the dovetail bit which must cut to full depth because of its shape).

If no power router is available it's usual to carefully saw and chisel the joint, after some very careful marking out of course.

This is called a "sliding dovetail". It is often used as a more secure alternative to a dado. A typical use would be in a middle shelf in a bookcase to prevent the case sides from bowing outward.

I don't think there is any way to buy something like this pre-cut. The closest I can think of is "slatwall" which is paneling with t-grooves to hang accessories in.

That is called a sliding dovetail joint.

You can make it with a router. Or a saw + chisels.

I think it is unlikely that a store will pre-stock the dimensions you need but you could try.

17
What is the simplest joint for a non-experienced woodworker to start with?
9
What's the best joint when exposing to weather (specifically for a beehive box)
7
How to join short boards to make a longer panel
2
First two backsaws - what to choose/buy?
6
Wood Staining is blotchy and black...HELP!
4
How do I cut this corner joint?
4
What is the name of the joint used in these lattice designs?
5
Edge joint failure - what is the cause?