I'm joining 4x4's in a tee with a mortise & tenon, and am not sure what the dimensions should be. Everywhere I've looked has either contradictory or nonsensical information, so I thought I'd add some more noise to the giant archive that is the Internet.

So, in the table that I am building: 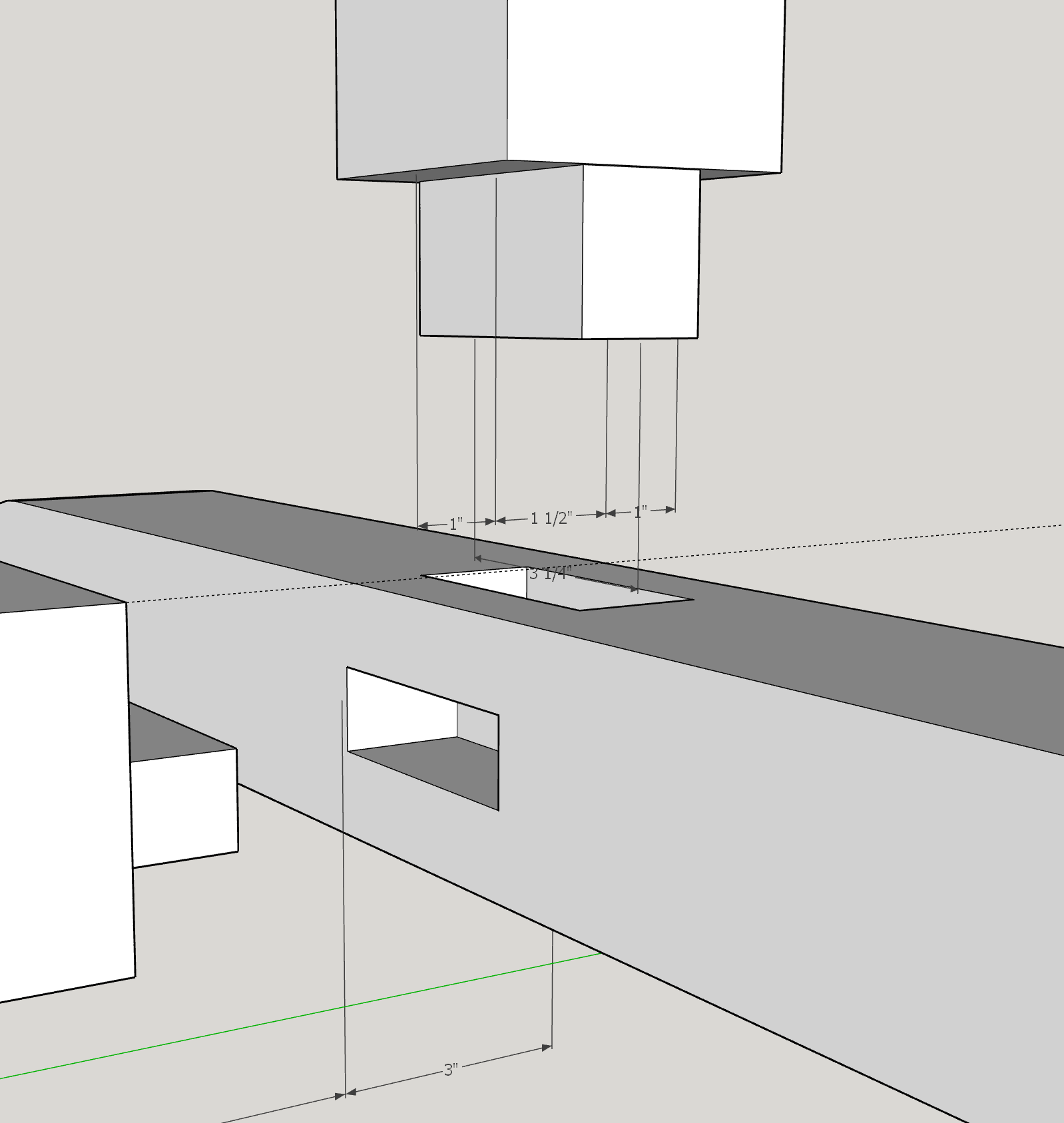 BUT, it feels like the bottom/left joint should be vertically aligned, as the longer dimension of the tenon would provide more torque resistance. If I do that, though, there won't be much material left outside of the mortise on top and bottom, so THAT seems stupid.

Am I correct? (As in, is my Sketchup wrong, and the bottom-most board should be rotate 90 degrees?)

Also, I'm unsure of the correct mortise / tenon dimensions when joining two 4x4s. I've seen references to 1/3 of the stock depth, five times tenon length, etc. Most of these seem to be written by and for people who already understand how this works. Much like the EE textbooks in undergrad, such explanations are useless to me.

My geometry-saturated brain (game developer) tells me to make the tenons 1 3/4" square and deep and call it a day, but I really don't want to make my wife a new table in 3 years if this sags / cracks / whatever.

You really don't need to over-think this. Let me emphasise that for you, you really don't need to. Even the most modest of tenons provides a very strong joint (assuming it is well cut and glued naturally) and as mentioned in previous Answers many traditional joints are over-engineered for strength.

To give two practical examples of why you don't need to over-analyse this, take the dowelled or the modern Domino version of the same joints you have here. In their respective ways they both sort of simulate a mortise-and-tenon joint, the dowels or Domino acting as tenons and their drilled holes as mortises. It's quite common for both to give significantly less glue surface area than a M&T joint on the same members, but yet each give sufficiently strong joints in service that this isn't an issue.

If they're good enough then it shows that most of the time even a slightly undersized tenon will do, so no need to follow a rule laid down in print to the letter.

In this case it reflects that there isn't just one way you can go. A lot of woodworking is like this unfortunately so you have to get used to their being no One Good Way to do anything.

For mortise-and-tenon jointer there isn't just one set of proportions that work best, any more than there's one style of M&T that is always suitable*.

A tenon approximately 1/3 of the thickness of the material is a useful rule of thumb, and for a lot of work you can just apply this principle and you won't have any problems. But for thinner material it's fine (actually desirable) to make the tenon thicker than this proportionally.

And on very thick material because the tenon is going to be so beefy anyway it's already very strong. And it wouldn't have been uncommon to size the mortise to the widest chisel available. The tenon would then be cut accordingly. Even if this meant the tenon ended up 1/4 or 1/5 the thickness of that piece it's often no big deal.

BUT, it feels like the bottom/left joint should be vertically aligned, as the longer dimension of the tenon would provide more torque resistance.

As drawn is the way this would usually be done traditionally in simpler joinery (many variations are possible, with some cabinetmakers choosing to use what seem like the most difficult and complicated versions possible .....just to torture their apprentices perhaps LOL).

The torque resistance thing may or may not be true, but anyway M&T joinery is already strong in this way. The main thing is how much torque does it actually need to resist? Once the table is fully assembled, very little more than likely. The joints throughout a piece mutually support each other by locking the structure into a given shape so individual joints can be weaker/less strong without significantly undermining the overall strength.

Recommended reading
If you haven't read it yet it's worth downloading a copy of Woodwork Joints by William Fairham, considered one of the classics on the subject. It's available free on Project Gutenberg here.

*In almost every case more than one style would be equally suitable. Fox-wedged, wedged through-tenons, drawbored tenons and one or two others probably give joints that are close to equally strong, without any real strength advantage. It becomes more a case of traditional or personal preference which way you go. Always remembering that as far as furniture is concerned they're probably stronger than actually needed in every instance.

Not the answer you're looking for? Browse other questions tagged joinery mortise-and-tenon or ask your own question.