Do I need to worry about expansion and shrinkage for my table top with wood joined at 45 degree angles?

Sorry if I'm not using correct terms here, I'm kind of new to woodworking (this also means this might be a duplicate question and I didn't know how to search for it). My dad and I are going to do my first big[ish] woodworking project together in a few weeks. the current plan is to use mango wood and half-lap joints to make something that looks roughly like this: 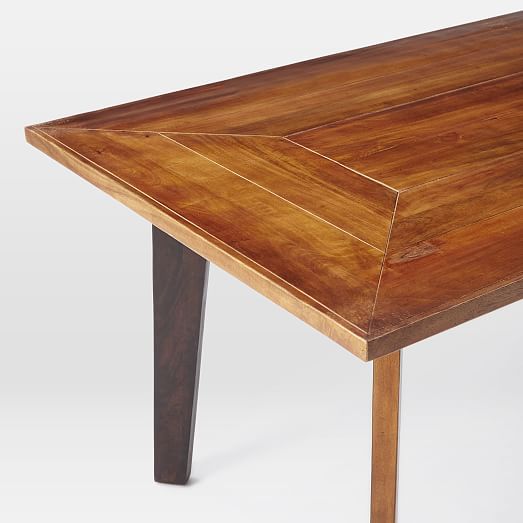 My wife really loves the look of this table in the picture. I'm worrying about the picture-framing and expansion

I'm worrying about the picture-framing and expansion

Good eye. There are multiple issues with the design of the table pictured, if you want to make it from solid wood. The first is not obvious, it's the 'edge banding' around the periphery. This frames the table, which is nearly always a very bad idea if the tabletop is made from solid wood (see recent Q&A).

This is one of the things that make me suspect that the table in the photo is made from plywood or another board material with veneers applied. I actually hope it is because there is an alternative explanation unfortunately — that it is built exactly as it looks, which will inevitably lead to cracks, various joints opening up and possibly other issues. It's sadly too common these days for things to be built with no consideration to wood movement. Periodically I see pieces built poorly like this where cracks have begun to form even before the piece has left the showroom.

The more obvious picture-framing in this top isn't the usual way it's tried, with just a relatively narrow frame around a wide field. And as a result it may be possible to do this using solid wood throughout. The main issue with picture-framing normally is the inevitable expansion and contraction of the central panel, which will push apart the framing (breaking some of the mitres) during wetter months and shrink in away from it during dry months, opening up gaps on the long sides.

Here the centre is just the one board and it's not too wide so you might be able to get away with it (although it will strain the joints somewhat). It would be highly advisable to use quarter-sawn wood for this centre board at least to limit its movement. QS material used throughout would actually be desirable, although what's available in your chosen species is going to limit you here.

Because the mitred elements are so wide here you do have to be concerned about those long mitre joints. Glued-up panels are primarily joined with simple butt joints which because they're long-grain joints are very strong. The 45° cuts making up four of the major joints in this top are end-grain to end-grain joints, which are famously weak and in need of reinforcement. And that's even in a picture frame which will be oriented vertically with no strain put upon it but its own weight! Not a tabletop that someone might lean their weight on..... so I think the table's apron will need to be large enough that it provides good support out to near the edges or you'll run into problems in service..

Make the center piece plywood or similar to avoid movement. As long as the mitered sides are the same width you should see similar movement along the joints. Another option is to use quartersawn material to orient the movement in the direction of the thickness.

Analyzing the wood movement here takes a bit of head scratching. Typically, the wood will expand and contract across the width of the table and the common response is to accommodate that movement with a breadboard end condition. However in this case the expansion of the end board is significant due 45 degree joint at the corners and deep width of the end boards. My first impression is that the 45 degree corner joints will want to pull apart over time. However, this movement will be resisted if the lap joints connect the width and length boards. This all adds up to a lot of stress in the corner joints which, if not accommodated, will eventually result in failure, although where it will express is not predictable. Note that the less variance in temperature and humidity on the piece, the less dramatic the failure would be.

One solution to release this stress might be to avoid continuously gluing the adjacent wood planks to each together, instead creating a series of rectangular frames that nest on the lap joints at their perimeter. Screw the frames to plywood on the underside with over-sized holes in the boards to allow movement of the top boards relative to the plywood. Allow minor spaces in the lap joints of each frame to cover the movement between them. The glued lap joints at the corners of each rectangle should prevent gaps forming at the diagonal joints. Providing a beveled edge between adjacent boards with a spacing of approx. 1/16" at each joint should be adequate for most conditions.

Not the answer you're looking for? Browse other questions tagged joinery wood-movement tabletop or ask your own question.

6
Would a slab constructed from 2x4s be stable?
6
Thick tabletop movement

8
Do pocket hole screws allow for proper expansion and contraction in planked table tops?
4
Mortise and Tenon for shed wall framing
3
"T-slot joint" or "cam nut"- style plywood to the wall connection
2
Joining 3 wooden cubes with swivel joints
1
How do I cut a blind half-lap T-joint?
4
Designing and Building a Through-Leg Table
3
Wood movement with L-shaped mitred leaning shelf
2
Reusable Desk design: how to join pieces?
3
Loft bed design
3
What to do about cupped table top