Ripping vs Resawing - is there a reason for the difference?

While I understand the technical difference between ripping a board in two vs resawing a board into thinner boards, is there a technical reason for the distinction?

Granted, thinner pieces of wood will flex more substantially during cuts on a resaw and binding while cutting is a concern, but that's a difference of degree not type, and would remain true when ripping boards into smaller sections as well.

It would seem to be more reasonable to label the cut according to it's orientation relative to the grain like we do with the crosscut. Presumably "quarter-sawing" perpendicular to a consistent set of rings of alternating density is mechanically distinct from "rift/plain-sawing" mostly between the rings, resulting in different stresses on the blade and wood.

Resawing is a type of rip cut (always, without exception). The reason for the different terms is that ripping cuts are all cuts along the grain but not all rip cuts are resawing.

Resawing, as the term is used today, refers only to cutting a board across its thickness, i.e. sawing a thick board into two (or more) thinner boards. You are literally re-sawing the board from its original sawn thickness.

A standard rip cut performed on the same starting board would be reducing its width.

It's both, but wouldn't normally be referred to as a resawing operation.

I don't think this is because a 4x4 isn't generally referred to as a board (although that distinction is largely arbitrary), but if you sawed it instead into three or four or five boards, that would then be resawing certainly even if it wouldn't commonly be thought of or described that way — lots of idiosyncratic or irregular use of terminology in woodworking, as well as regional and dialectical differences.

It would seem to be more reasonable to label the cut according to it's orientation relative to the grain like we do with the crosscut.

No, because the orientation of the grain, as I think you're referring to, isn't relevant. Resawing is a type of rip cut as already stated, so in one way the cut is always along the grain but the angle of the cut as it relates to the grain in the wood the other way (more radial than tangential, more tangential than radial) is not relevant to the type of operation, thinning the board is the only criterion that defines resawing.

I'm giggling inside at this, we do love to over-analyse things. Anyway not that I'm aware of. Why would there need to be? We can call resawing anything we want for all the difference in makes in what the operation is, or how it's done.

I bet in other languages resawing wouldn't be a simple translation of re- saw, it could be a specialist woodworking word stemming from the historical name for the cut with no exact parallel in English (there are a few examples of this in French, German and Swedish).

But regardless of the word(s) used in all cases it will simply refer to a type of rip cut performed to cut a thicker board into thinner boards.

There is a distinction because the actions are different. You must make considerably different considerations when resawing than when ripping, and those considerations are not specific to the grain direction, but to the dimensions of the board. Resawing is splitting the thickness of a board, whereas ripping is splitting the width of a board. The thickness is the smaller of the two dimensions, which causes the process of making that cut much more difficult. You are relying on your fence more than the table in most cases, and are burying your blade in considerably more material.

I could see these concepts getting confusing because there is some correlation between the two.

As discussed in this answer ripping or a rip cut is:

With the rip cut, you cut along the grain

Resawing is the process of taking larger boards and converting them into smaller ones or veneers. The cuts are typicall rip cuts in this process. As discussed ,on FineWoodWorking, on setting up your bandsaw for resaw: 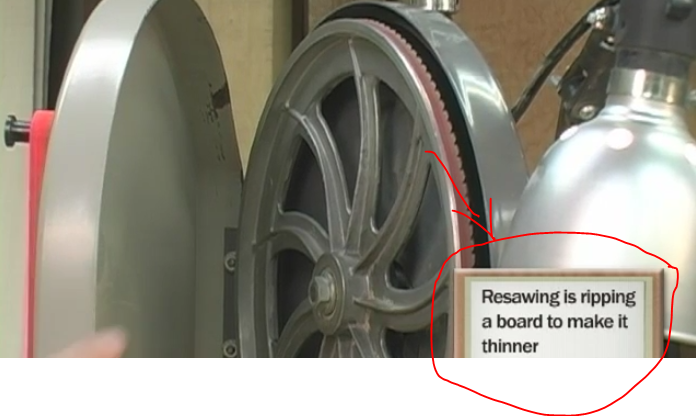 This doesn't just apply to thinning board but processing timber as well which will have obviously non uniform cross grain. Basically when you are resawing you could be ripping as well. Ripping is the cut and resawing is the process. This is how I understand it.

Not the answer you're looking for? Browse other questions tagged terminology rip-cut resawing quarter-sawn rift-sawn or ask your own question.

39
What is the difference between a rip-cut and a cross-cut?
6
What happened here? Wood tension?
3
Finishing a narrow cavity