I've made a utility-grade shelving unit for one of our extra-bedroom closets: 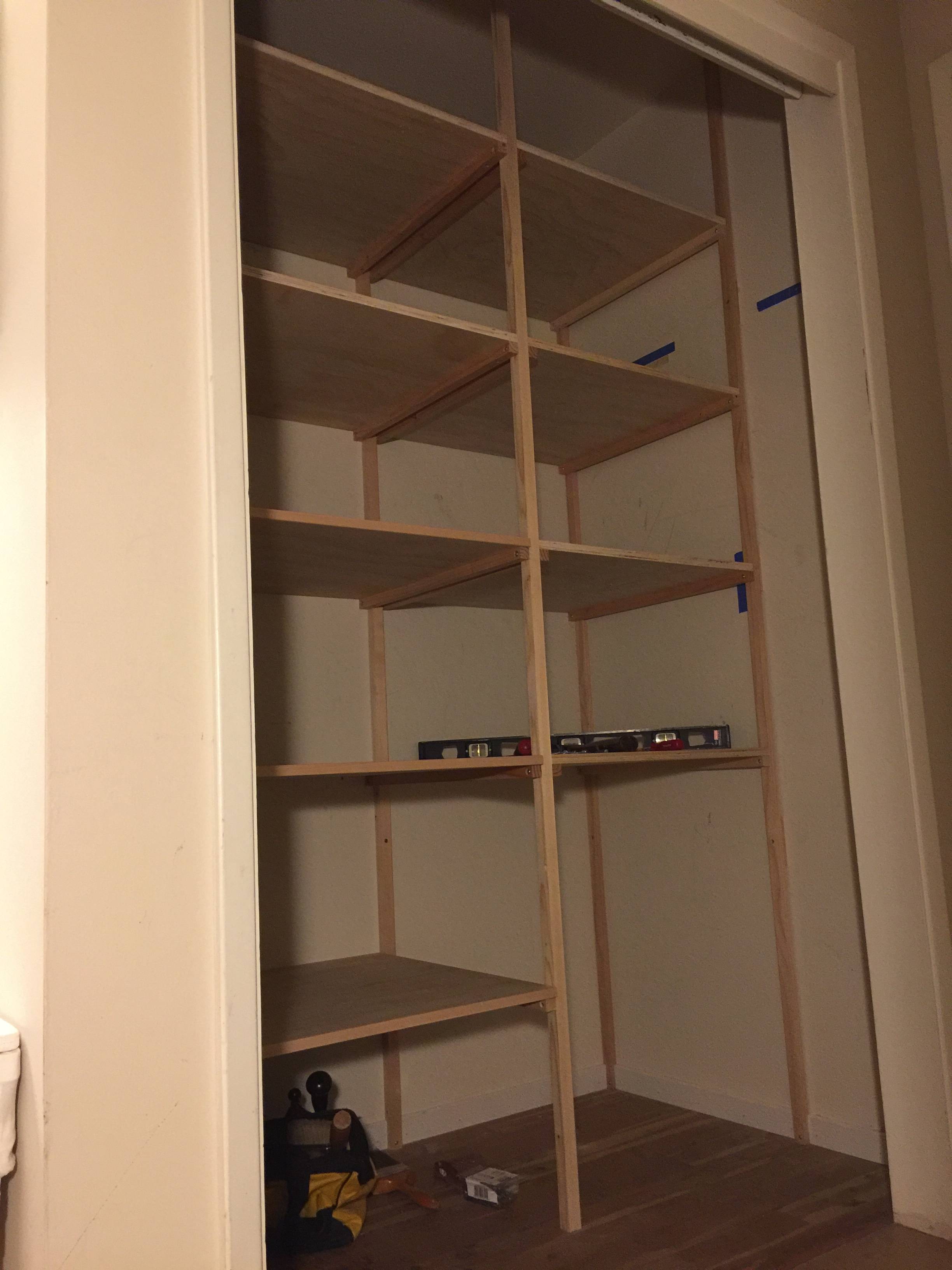 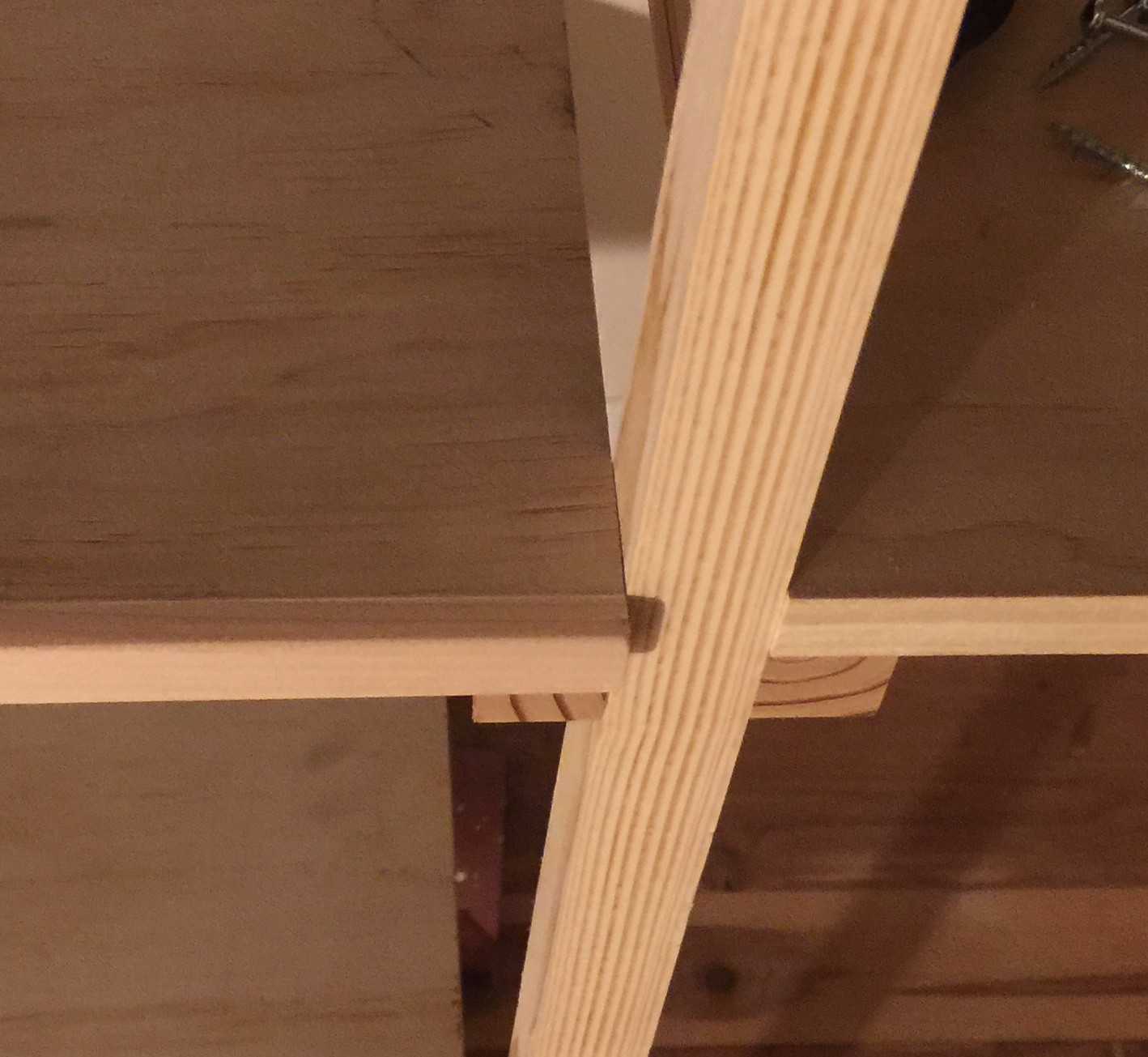 The stiles and cleats are resawn, cherry-picked kiln-dried dimensional SPF from the big orange store. The shelves are that cheap chinese 18mm ply (won't do that again, but seems to be working out okay). I banded the front of each shelf with 3/8" of the same KD SPF.

I was originally planning to paint everything with 1 coat primer and 2 coats alkyd enamel, to match the trim you see on the closet.

But as I'm getting nearer that step, I'm dreading the extended painting effort. I won't have enough room to paint more than a couple shelves at a time, so I'll end up going through more than 20 clean-up cycles with my brushes.

It caused me to wonder. Is there a simpler approach, like maybe wipe-on or water-based finish that will get near the toughness of well-cured alkyd trim enamel?

I was considering a wipe-on oil/varnish type of finish as I don't mind a natural finish instead of the white, but I wasn't sure that would hold up well. Most of the shelves will get plastic (polyethylene) tubs slid back and forth on them a couple hundred times over its life.

But as I'm getting nearer that step, I'm dreading the extended painting effort.... I'll end up going through more than 20 clean-up cycles with my brushes.

Two big tips can help here: don't clean your brushes between painting sessions, or use rollers. Actually I'd recommend rollers anyway but I'll get to that in a second.

Keeping a brush from drying out overnight
You can usually get away with not cleaning a brush between sessions (esp. when using oil-based finishes) if you just wrap it up tightly after you're done. It can also help a lot to first dip the brush into the appropriate solvent so that paint isn't going up into dry bristles.

The usual recommendation is to wrap in foil, but I wrap in plastic food wrap first, which provides a more airtight seal, then wrap foil around that. Keeping a brush going from session to session should be absolutely no problem this way, and with luck you can even leave a brush two days or a little longer.

I've left brushes three or four days wrapped in this way to test it out and the finish was beginning to set but the brushes were still usable after a quick rinse. So that can be pushing it, if there's a chance you might be interrupted and a gap of one or two days might extend to the following weekend it's best to go a different route.

Keeping a brush from drying out for much longer
You can keep a brush wet reliably from weekend to weekend, or longer, if you suspend it in a jar of the appropriate solvent. The solvent should just cover the tips of the bristles, doesn't need to be deep enough to soak their entire length.

There are commercial holders available that will allow a brush to be suspended in this way but the usual DIY solution is to drill a hole in the handle (usually just above the edge of the ferrule) through which you can thread a stout wire (e.g. a clipped-off length of wire hanger) which goes across the mouth of the jar of solvent, somewhat like as shown in this previous Answer.

You figure some kind of wrapping to keep in the vapour so the solvent doesn't evaporate (foil can again be pressed into service for this, pardon the pun) and you can then leave the brush for ages, confident it won't go hard on you. There is still some evaporation but it's minimal and you can top up periodically if need be.

In theory you can do this indefinitely. Some writers of guides that recommend this tip say they've never cleaned out a brush in 10 years of use. But that's a long time to keep the spirits in the jar topped up in my book!

But in general I wouldn't recommend brushes if you have big flat areas to cover. Spraying is the best way if you have the equipment or don't mind renting it, but I'd go with rollers myself nearly always.

Rollers
Rollers are the unsung hero of interior painting. They're used a lot for walls of course but their much greater speed and efficiency there doesn't get translated to other projects, we still tend to think brush when we want to paint stuff.

Now brushes can work well, especially a good brush in the hands of someone who knows what they're doing can create a great finish. But most of us are not that guy. A roller can achieve a finish nearly as good, or equally good, in far less time with almost no effort or experience. And they're easier to clean thoroughly. Rollers FTW!

Rollers can also be kept wet between sessions much as suggested above if need be.

The shelves are that cheap chinese 18mm ply (won't do that again, but seems to be working out okay).

I think as long as the job doesn't require peak strength this kind of cheap ply really isn't that bad. Yes it's a noticeable step down from how typical plywood used to be not that long ago (depends on how good your memory is!) but once painted who can tell? Some of it's even nice enough to have a clear finish put on it to show off the surface veneer.

The crappy void-filled interior is a non-issue visually in either case because we nearly always edge band or do something so the natural edge doesn't show.

I'd rent a paint sprayer. At my local evil orange, that's 75 bucks a day. Prep (lots of plastic) the night before. Get a thorough primer on first; let it dry. Get one finish coat on all sides. If you've run out of time, you can roll your second finish coat by hand on the shelf tops and fronts. If you don't run out of time, you'll get three coats in and pat yourself on the back for a hard day well spent.

Danish oil is a natural finish option worth considering. It's easy to apply and will give the shelves a more durable finish. It can also be reapplied later on if necessary. In my opinion the woodworking of the shelves looks quite nice and would be highlighted with a natural finish.

Not the answer you're looking for? Browse other questions tagged finishing plywood finish-selection cabinetry varnish or ask your own question.

12
Evening reflectivity of a finish after "finishing the finish"
13
Leveling a finish/finishing the finish
5
Covering particle board to prevent splinters and make easy to wipe
3
Having trouble finding a good finish for baltic birch
4
Best TOUGH clear finish for fragile wood-shaving flower?
3
Finish for pine plywood art piece
4
What is the best finish for a laser etching on birch veneer plywood?
2
Easy drawer joints for plywood
1
Matching a cheap yellow finish on oak