Can barn wood planks be planed and how thin?

Heat treated and planed/sanded to 3/4" thickness, by lumber mill.

Need the weight down of the wood, to at least half:

Can barn wood planks be thinned or will it just fall apart...or get messed up?

EDIT
Had carpenter sample plane 4 pieces. He got it down to 3/8" (half of what it was). Some pieces had large cracks than others and for those, glue was needed to get them back together. No cupping so far. 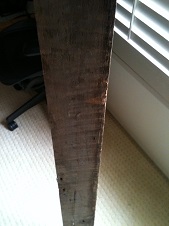 As wood ages it will dry out and become more rigid. Most portable thicknessers can get the wood down to approx. 1/4". Any thinner and the wood is at risk of tear out which will destroy the plank as it feeds in. Different species will perform better than others. How thin you want to go also depends on how you will be using the wood and how the grain runs through the piece. The thinner the piece the more likely it is to warp or cup. You can search this sight for more insight into the relationship of the grain and the tendency to warp. The risk of cupping will increase as you get wider and thinner, depending upon how much the grain lines curve in the cross section of the depth. I would recommend testing on a sample or two and leaving it sit for a week or two to see how this wood performs. I also suggest planing in small depth increments to limit the risk of tear out especially as you get closer to 1/4".

Can barn wood planks be thinned or will it just fall apart...or get messed up?

Depends on the wood.

All wood varies and "barn wood" is by no means a single thing — not a single species, not one age, not the same thickness, some will have been painted fairly regularly, some not in living memory and so forth.

But even with wood from the same source you can't rely on it to be uniform or to behave uniformly, boards of similar thickness from the same side of the one building? Similar (ish), but don't expect uniform results from each piece. Much better to expect that planks from the same building won't all behave the same way than to assume they will.

So this is really impossible to answer except to say maybe.

how thin can it go?

Again it depends on the wood. On paper you can thin a board to almost any thickness that's still usable (down to veneer thicknesses in the best of cases) but whether your wood will be stable and hold together well is going to depend greatly on how weathered it is.

Another factor is how you're thinning it. A planer/thicknesser will put the wood under more stress than hand planing down or resawing to the same thickness.

Just to cover the subject more broadly, can recovered wood be planed down to thickness? Absolutely. In general you want to do this by planing wood off both faces equally if possible. This won't always be desirable with reclaimed wood where you'll want to keep more (or all) of the exposed surface because of its patina or character. Just be aware this isn't as safe as removing material from both sides and take extra care to try to stave off warping.

When planing down any wood (even new wood from a reliable yard that dries their material well) you want to either use it immediately after it's at final thickness or protect it from warping in some way as it will want to warp from even the most casual of handling errors — laying it on the bench surface and leaving it there for a few hours or longer. Where you can't use the wood quite soon after processing I think most pros will sticker it (stack the boards with sticks in between) and weight it down, but some will wrap the processed boards in plastic to slow or prevent it losing (or gaining) any moisture.

3
Is it drastically more work to sand down barn wood instead of planing?

11
How can I minimize snipe while thickness planing?
17
What is a planer sled and how do you use it?
1
Flip-Cart for Wood Planer - Best Hardware and Construction
2
How can I flatten the top of a 12" natural log in place?
5
Can I remove existing wood finishes using a jointer or planer without damaging the cutting knives?
2
Can you use a jointer and planer on hardwood with gnarls?