Below is what I am trying to achieve which is to add an outfeed wing that will sit on the table with one edge and with the other on the table saw (Dewalt 745) This is intended to be a wing that can be relocated on any of the three sides where it can be connected . (S,E,and W sides of the table saw in the figure below) The workshop table was just summary represented by its top

What would be the most elegant and practical way to connect this will as described above. Must be easy to remove and reconnect to any other side. 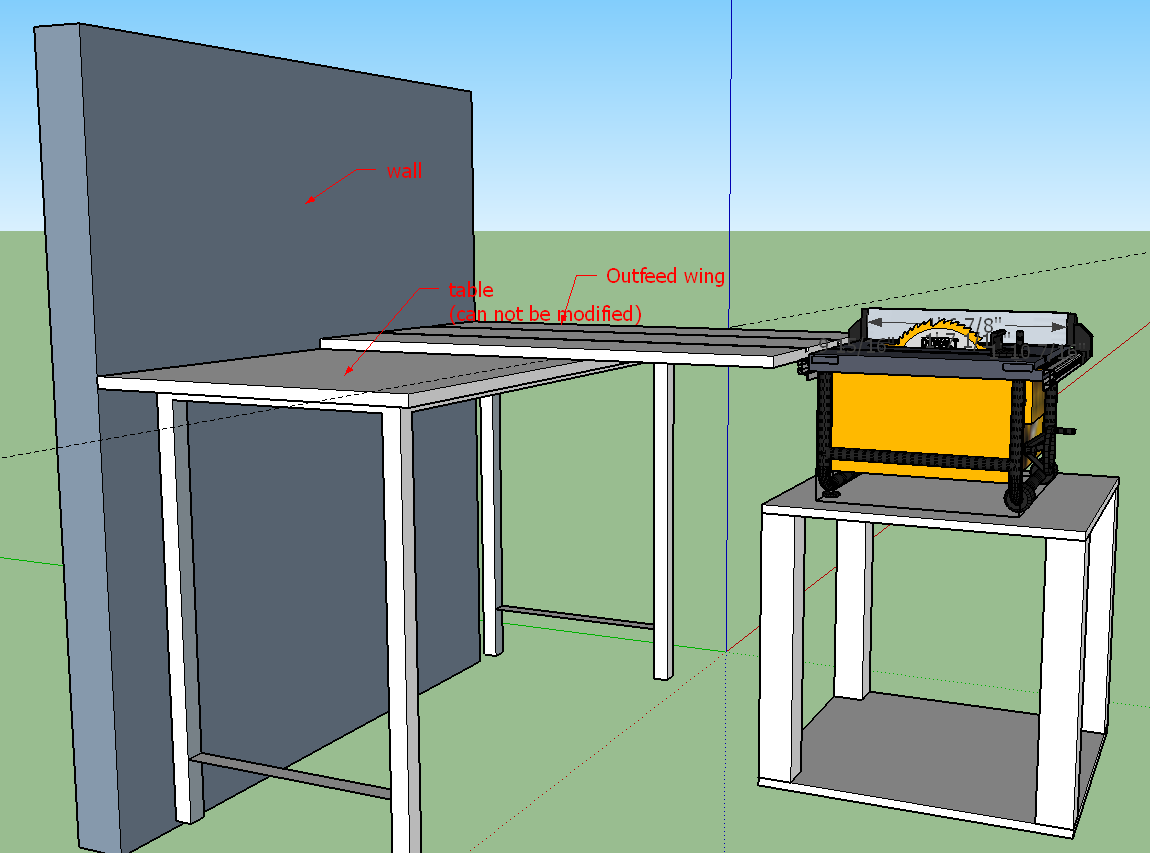 Update1: I have updated the picture because in the meantime I considered a couple of more details The table saw support and the bench are both on wheels. I don't like the idea to move the table, but I am with re positioning the table saw support Of course the table saw can be moved close to the edge (that is one option) but then I depend on the bench for that wing. I am more interested in a solution to support the out-feed at the table saw end, the opposite end could be supported by anything (a table, legs, bolts in a wall etc)

Update2: after toying with some ideas here is what I am thinking about. The legs can be secured against the table saw stand by claps or by drilling holes in the legs of the stand and by using pins Brackets to slide the legs in could also be an option 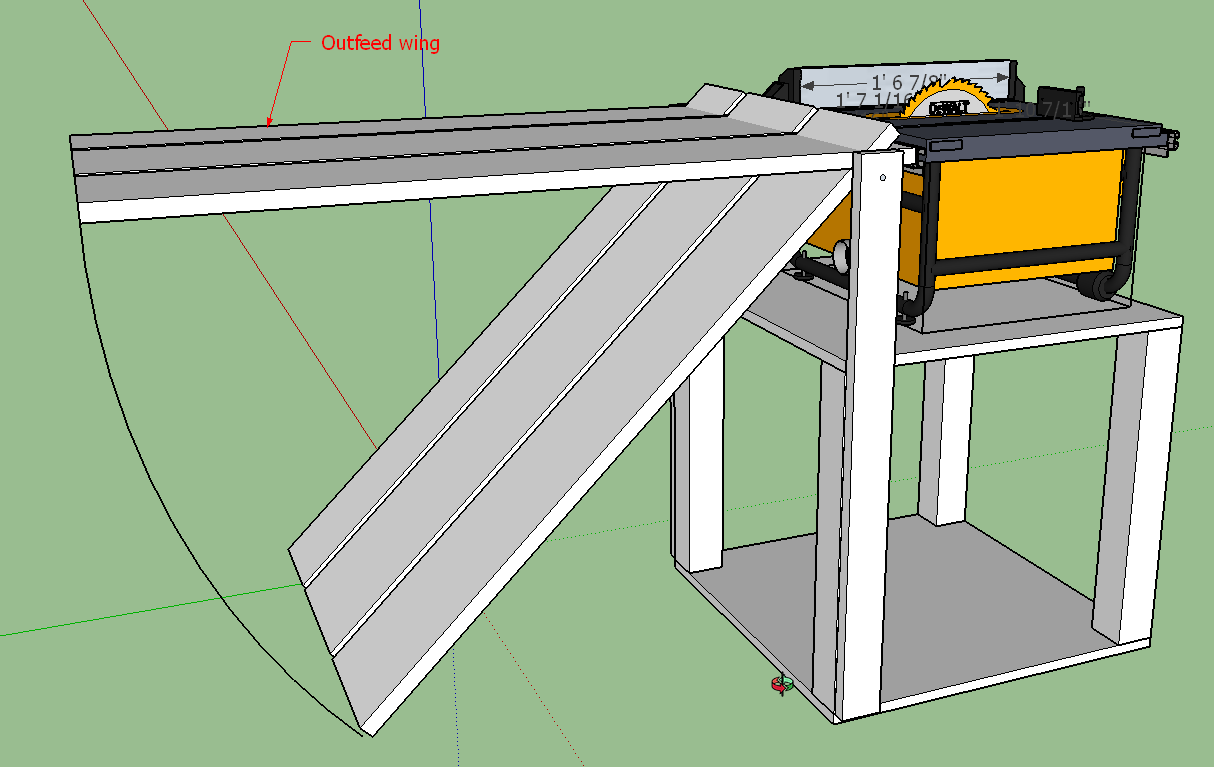 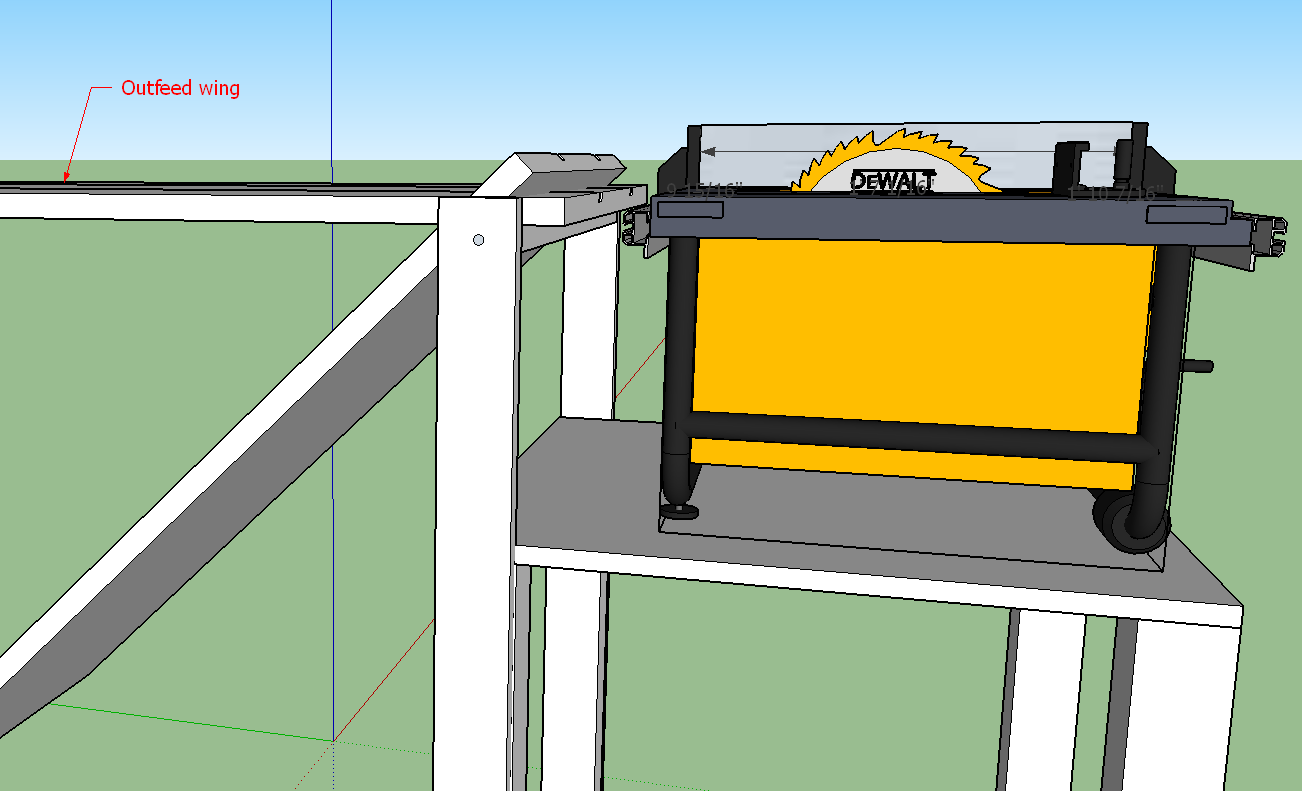 My first thought is loosely based on how drop-leaf tables support their leaves once open, just without the hinge.

If the table can be configured so that sliding supports can be installed underneath the top surface at each required position you could simply rest the outfeed extension upon them when needed, lift it off and store it against the workshop wall when not in use.

The supports will need to be fairly long, double the width of the outfeed surface or more, but can be stored out of the way under the table at one position — one of the sides where they can be slid fully in so as not to project from the edge. They will be held under the table most simply by C-shaped brackets made from plywood, the cutout done accurately to provide a tight sliding fit for the supports.

With four battens nailed or screwed to the underside of the extension pieces providing a tight fit against the sliding supports the registration will be very positive and if it needs to be able to lock in position that could be arranged with pins of some kind, either from the sides (underneath) or even through the top. Allen keys would make excellent pins, with a handy bend already there to help pull them out*.

Strength
In traditional woodworking thinking something like this wouldn't be thought to be particularly strong, you wouldn't want to lean on it a lot for example in the same way that you're not supposed to lean heavily on the two ends of a drop-leaf table, and that's with the added strength of the hinges.

But just using fairly light sliding supports (two 2x1s or similar) it should be more than good enough for an outfeed surface for a table saw which isn't ever weighted heavily.

The arrangement can be made much stouter if needed however, by making up the supports as laminations. This way inexpensive material (SPF or plywood) can be used and you'd end up with something stronger and stiffer than any very strong (expensive) solid wood you could reasonably hope to use instead. This is the principle behind Glu-lam beams and it works on a small scale just as well as at a large scale.

*Many of us will have multiple spare Allen keys in one size in the house from flat-pack furniture, but if not the cheapest of cheap Allen keys of the type stocked in a dollar store/pound store will do. These can actually be surprisingly not-sucky anyway for how cheap they are, but for a job like this they're more than adequate.

My approach to connecting the outfeed wing is to rest it on a wing wall made of a 2x2 frame and 1/2" plywood on one side that extends from the tablesaw support cart frame. By extending wing wall up to approx 3/4" from the top of the saw surface the outfeed wing can be flush with the saw top surface/ If you wish to change the outfeed wing from back to the side you can rotate the saw. You may have to put openings in the wing wall to accommodate the adjustment wheels on the saw, but it should easily carry the weight of anything you run through the saw.

11
Can I effectively use a table saw to straighten warped lumber?
8
Table saw safety devices
1
Sears Craftsman Table Saw Model Number
11
Considerations for using smaller diameter blades on table saw?
5
What hardware should I use for this hinge?
3
Table Saw Bevel Maths?
4
Is it appropriate for an 8 year-old to act as a 'helper,' ripping sheets on a table saw?
1
For wood working purposes what is an acceptable error for blade vertical alignment for a table saw?
2
Minimum table saw precision for project work?
1
Is an in-feed extension for a table saw useful?