How do I align threaded inserts

I'm making a box with 1/2" thick sides. One face of the box has to (occasionally) be removable, so I'm intending to use threaded inserts.

The face of the box (and the edges it aligns to) hasn't been drilled yet.

You can do this in two ways that I can think of. Actually three, since you could do this in the most basic way of all — using standard marking procedures if you're careful, just as dowel holes used to be done back in the old days (and they didn't even have the benefit of through holes).

The second is to drill a small pilot hole into the face piece, position it against the sides of the box (much as when transferring marks from tail board to pin board when dovetailing) and then push the drill bit or a matching scratch awl/ice pick through that pilot hole until it makes a definite mark in the other piece of wood. This is now perfectly in line with the existing hole, you then drill the holes for the threaded inserts as normal using these reference holes.

Whichever of these two options you were using once you have your marks it's vital to have no shift at all during the drilling operation, so workpieces must be firmly clamped up and ideally use a drill press/bench drill for the drilling. This can be done using a hand-held power drill or even a hand drill of some sort if you use a jig of some kind to ensure the drill is held perfectly square.

Third option, no threaded inserts
Fit the front to the three-sided box and clamp up. Drill the front boards and the side boards in a single operation, then drill, ream out, sand or file the holes in the front boards so they just give clearance to the threads on the bolt or screw you'll be using to hold it in place.

Now position the front board and clamp it in place (you're using its holes as guides for the next operation) and thread the holes in the sides using the bolt/screw itself. You can force them in if the threads are not too coarse and the wood isn't too hard, or modify the bolt or screw to be self-tapping if you prefer (the safer option).

In either case it's worth squeezing the wood with a clamp to help prevent it splitting.

Threading made directly in wood by either method can be surprisingly robust and last years of regular use, particularly in harder woods that aren't too brittle. On softer woods the threading can be greatly strengthened by running some thin superglue into the hole after the threads are formed.

*Chuck the rod (or a bolt with the head cut off) into a drill and run it, rotating, against a coarse belt sander or grinder wheel. A sharp point that should be perfectly aligned with the centre line of the threaded rod will be created in a surprisingly short time.

If you have a transfer punch that fits snugly through the insert (assuming it's in a through-hole), that will get you pretty darn close. 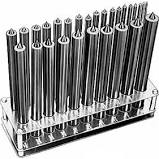 Otherwise, transfer screws are an option, although perhaps fewer folks have those handy. 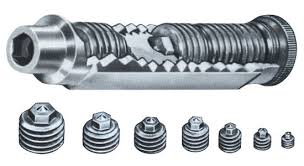 In a pinch you can make some of your own out of threaded rod or a bolt by chucking it up in your drill press and working carefully with a file to give it a point, then cutting the end off with a few (4-6) threads. You'll learn why the ones you buy have the hex section on them when you're working to get them out :)

The simplest way to do this is to clamp the face of the box securely in place in the desired assembled position.

Then drill the hole for the threaded insert through the face and into the side panels, you can just keep inserting/screwing the insert past the face panel until it reaches the final destination.

Your bolt wont have a snug fit in the face panel because you will now have some clearance between the bolt and the wall of the drilled hole. But if it is a countersunk bolt/screw or something similar, you wont notice any alignment issues when reattaching the face panel.

Create a template or guide that registers at the proper location on both parts; for example, you could use a shelf pin jig or doweling jig depending on the dimensions and orientation of your parts.

As Graphus hinted, you could also put a dowel center in the hole for the threaded insert and press the two parts together to transfer the location from the first part to its mating part.

11
How can you make a regular screw into a self tapping screw?

16
How can I create artificially spalted wood?
9
How can I make this cribbage board peg compartment?
10
Drilling a straight, centered hole down square-cross-section bar stock?
15
How can I ensure my threaded inserts go in straight?
6
How to make a recess in a board
11
Quick corner joints in practice
5
How is this engraving obtained?
4
How to enlarge a hole behind metal bracket?
0
How can I create surface defects intentionally?