Is it safe to keep the bark on a fresh/green slice of tree trunk?

I just got a freshly cut slice of a big tree trunk from my friend. Thinking of using it as a table. Sanding it down etc. Now I know there's all the drying etc to consider, but the first thing I need to know before I even take this home into my house is: is the bark/tree slice a risk to bugs damaging other furniture/things?

I did some research and one SE post (https://diy.stackexchange.com/a/14371/32148) said certain beetles like power post beetles live and lay their eggs in the bark. Is this true?

Are there other things I need to consider/treat it with? I'm wondering whether I should remove the bark, to be on the safe side from any bugs infesting my new apartment/furniture, but he bark looks really nice! (Yes, the slice in the photo is currently indoors but at the office, as my friend dropped it off at the office) 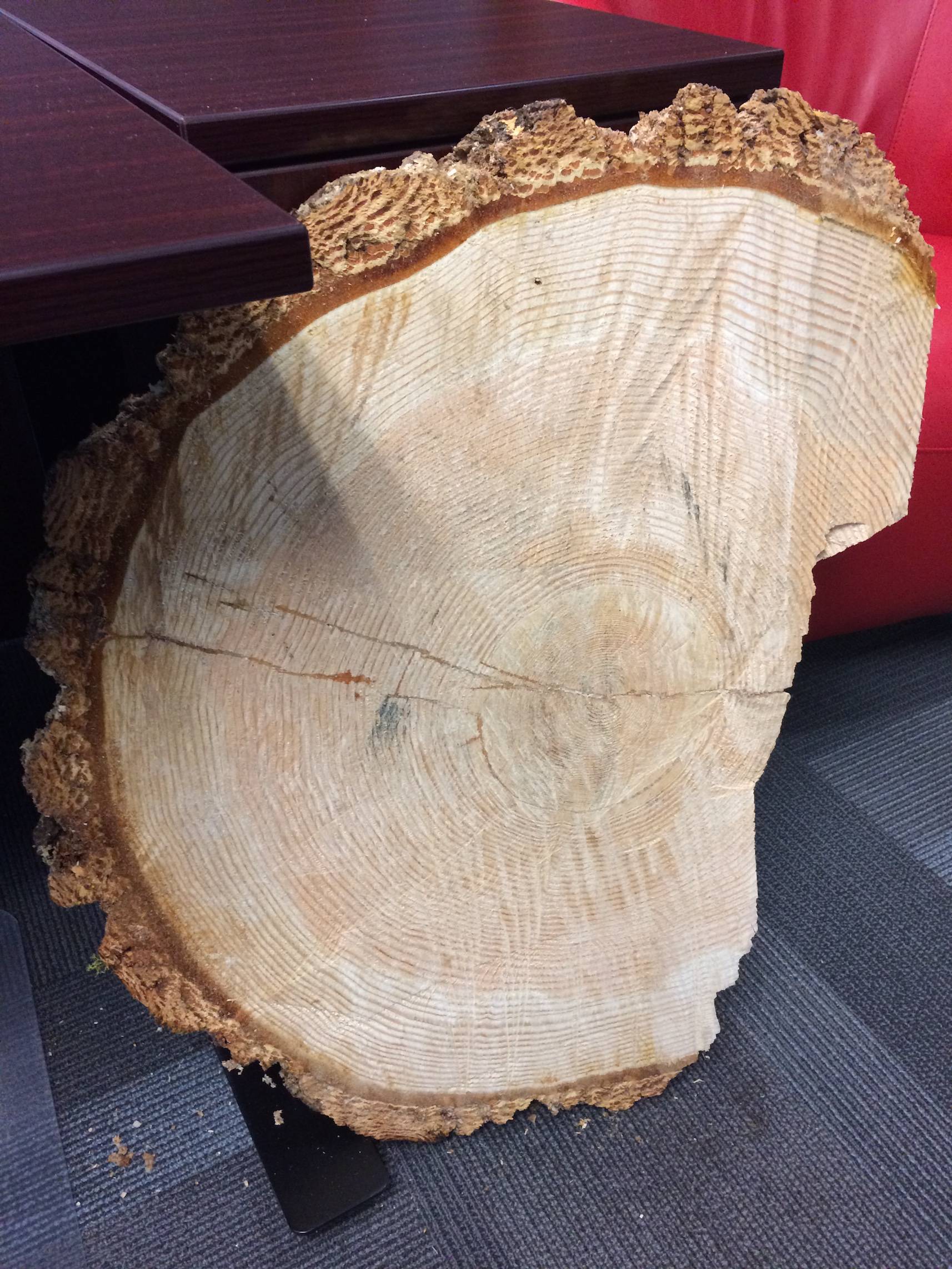 First off the bad news, that's almost certain to crack on you as it dries out. You might get lucky in which case you dodged a bullet, but the wood already has natural defects radiating from the centre and it is from there that many natural cracks arise.

To help lessen the risk of cracking the first thing you should do when you get it home is coat the flats with something to slow moisture loss. And the best thing you could use for this is melted wax. Doesn't matter how you get it on there, just apply it in a thick layer to both sides (one side at a time will keep the mess to a minimum). I wouldn't use a brush for this because it might be impossible to clean the wax residue from the brush, so improvise something else — a wad of paper towel held in tongs will work perfectly.

It's very difficult (sometimes impossible) to preserve the bark on wood. It depends on many factors, the species being one of the major ones, but there is a lot of variation possible even with one type of tree. As a very rough rule of thumb the thicker the bark the more likely it is that it'll want to flake off or crumble.

It is safest to remove it now because of the risk of wood-boring insects, but some people do retain the bark on this type of thing.

Your picture looks like Douglas fir bark. I have built 3 tables with Doug fir bark with great success. I simply air dryer the slabs to 15 percent and handled the wood very gently as the bark will separate easily when it is dry. I used resin to finish the top as it helped with the bark staying on good. Tables in use for over 3 years with no problem. Doug fir sometimes has pitch pockets that bleed which is a bigger problem. Never had any issue with bugs.

I live in the Pacific Northwest. If I leave bark on air drying green Douglas Fir slabs inevitably I have bark beetles digging holes and leaving frass (sawdust) behind.

If your round is green, I would worry about beetles. But if it's already quite dry then I wouldn't be too concerned.

Remove the bark. I have heard so many people complain after the table is finished and within a yrs time they are gluing pieces of bark back on only to have it break off again. Sometimes the bark gets stepped on and then it is impossible to get it back on.
It will look nice even without the bark on it.

Try to completely coat the entire piece in 2 part epoxy using at least 3 coats. The idea is that it will retain moisture until epoxy has penetrated.

Not the answer you're looking for? Browse other questions tagged wood furniture green-wood or ask your own question.

10
What are the steps for the general hobbyist to rescue green wood for future projects?
10
What is the process, from start to finish, for milling a tree into boards?
10
How can I keep a cedar tree round from checking?
9
How to can I repair/mitigate rot in the center of a Western Cedar tree round?
6
When is the ideal time to work green wood
5
Should I keep cherry in the sun before finishing?
2
Storing a tree trunk for furniture
6
What is the definition of green woods?
4
Is cedar dangerous for your health when used in indoor furniture?