Lately I've been getting some pretty bad blade binding, and seemingly warping and bending as it travels down creating a horrendous, wavy cut.

First happened on some 3/4" melamine. I was able to go back over and fix up the edge. 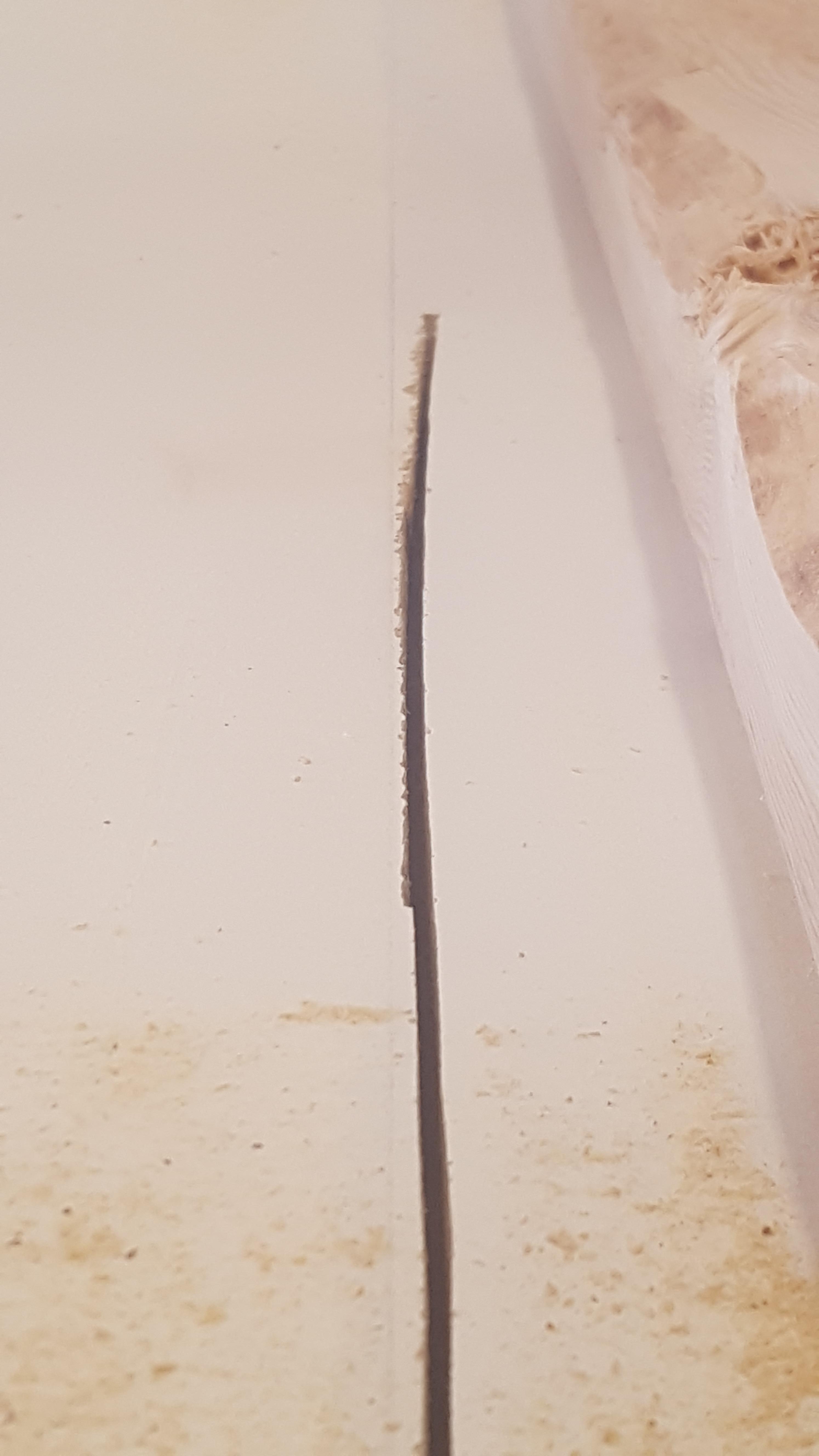 Happened again today on some simple 1"x4" pine, trying to cut at a 45 through to make a french cleat hanging strip. 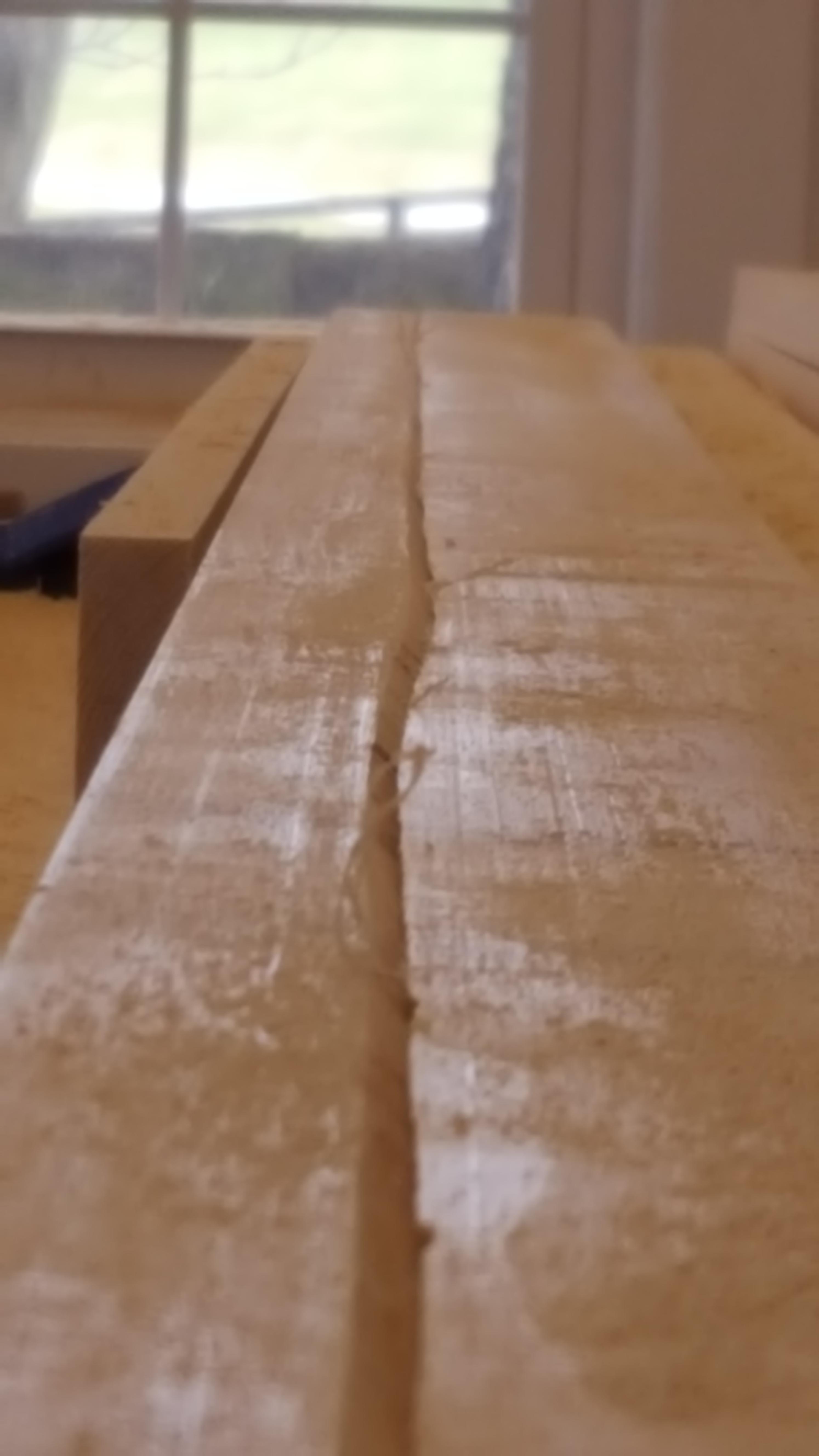 And it was apparently bad enough to rub markings off the blade. 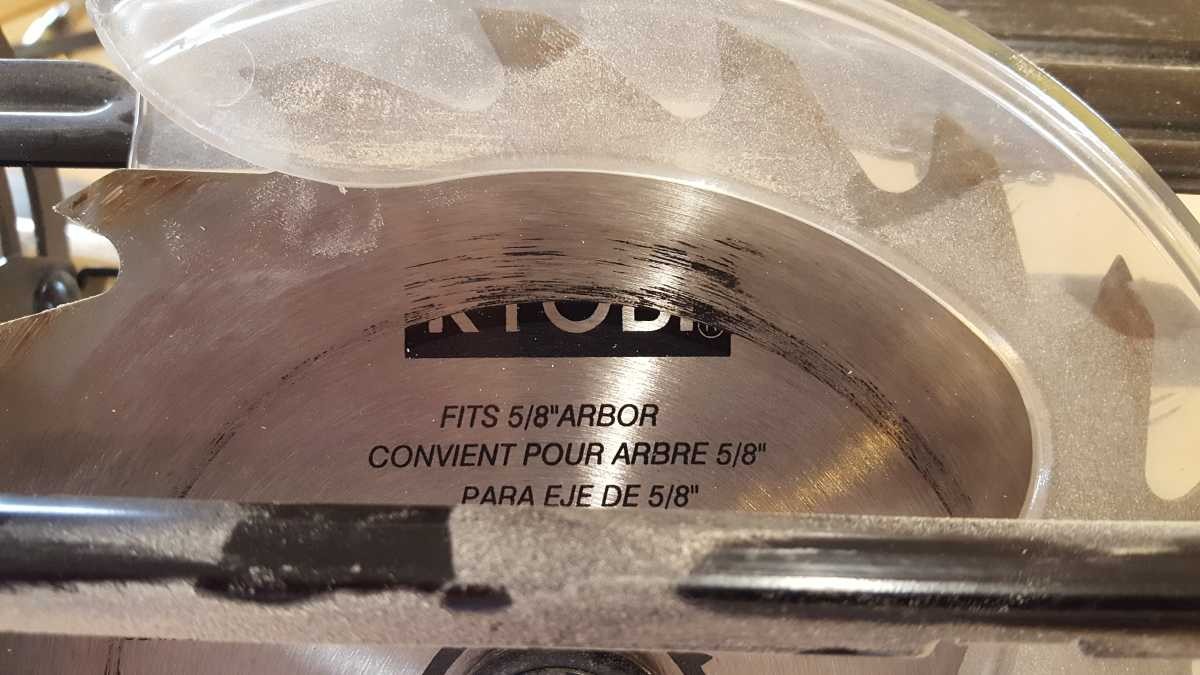 So a couple other points to note:

Not sure what's going on, but I'm trying to avoid an unsafe condition and get perfectly straight cuts. Any ideas?

Check whether the blade is parallel with the edge of the base, the edge that goes against the guide. If the blade is further away at the front, it's going to want to walk away from the straight-edge.

This is probably easiest to do when the base is in the 90 degree position rather than set at a bevel. Use a calipers if you have one to get a pretty precise measurement. You would like it to be within 1/64" (0.015") at the front and back; 1/16" would be enough to cause a problem. Mark a tooth with a sharpie and rotate the blade so you measure from the same tooth at front and back; this takes runout out of the equation.

While you're at it, check that the base is firmly attached and that you can't move it side-to-side when it's locked. It general, you'd want to stare at it until you understand how the base attaches to the saw body and make sure everything is tight and as rigid as its design will allow.

You can check the arbor (with the saw unplugged) by clamping a piece of material, maybe a dowel or thin strip of wood to the base and brought very close to the blade. Turning the blade by hand say a quarter-turn at a time (and taking your hand off in-between movements) see if the space between the strip and the blade changes. You could use a feeler gauge to be precise, but I'd start just by eye.

If the blade doesn't run true, try another blade. If you get the same result and the runout is more than say 1/32" trade it in for another at the store. You might want to open the box on the new one and do this test there before taking the second one. I'm not entirely confident about what acceptable runout is, perhaps another answer or comment can weigh in on that. Definitely 1/8" is too much and 1/64" is probably the best you can expect and would work fine. So you'll need to use your judgement on that. In general runout is only going to widen the kerf though, not cause tracking problems like you're seeing.

You are going to need to apply some "inward" pressure on the saw to keep it running tight up against the guide. And of course the guide needs to be straight; sight down it's length to confirm that. Also, good results are going to require your workpiece be laying flat. It can't be dished or humped; you'll need to support such that it lies flat.

One other thing, the work needs to be supported from underneath, but not clamped across the cut/kerf. It the picture above I see the french cleat workpiece in what appears to be a vise. If the work is clamped, the saw cut will close up and bind the blade.

I have the same saw, same exact problem. Just measured how parallel the shoe/base was with the blade, as per suggestions above. 1/8" off from front to back! Mystery solved. But, no way to adjust the base to correct for this either - it is just built poorly.

I did find that by minimizing blade depth (so only having an inch exposed on a 3/4" material cut) this problem did not happen (obviously the shorter arc length of the blade is not as far out of parallel with the base). Anything over a couple inches thick though - the blade cuts a nice curve.

Basically, dont buy the cheap Ryobi with the plastic body and cheap base plate. Lesson learned.

I have the same thing with a Hitachi.

Then plunge cut through the new base to get blade clearance. Lastly, I removed the adapter plate and squared up the sides with the slot cut by the plunging blade.

Be careful though as the blade guard will not return to cover the blade (unless you cut a larger slot in the adapter plate to allow it to travel through).

In time I will make a new sole plate from more rigid aluminium and beef up the pivots, the bevel gauge & lock screws and make a fine adjustment screws for paralleling the blade and setting zero point references.

First suspicion would be the blade, but if you've swapped out the blade and it's still happening then it sounds like the arbor is bent/out of alignment.

Has the saw been dropped at all? or bound/jammed when making a cut?

If it's less than a year old (and you hadn't damaged by dropping it), I would be returning the saw and exchanging it.

Not the answer you're looking for? Browse other questions tagged circular-saw or ask your own question.

12
How to make a long shallow cut on a narrow piece of wood with a circular saw
11
How to sharpen a circular saw or mitre saw blade
6
How to make a louver vent in a board?
10
4'x8' length cut - circular saw, table saw, or panel saw?
5
Panel Glue up Question
5
Choosing a saw for oak worktop, considering future usefulness
3
Using a larger blade in a table saw (circular saw)
1
How do I get the blade-guard out of the way for a plunge cut with a Dewalt circular saw?