How can I strengthen my 3/4" Plywood Bunk Bed Plan?

I'm working on a plywood bunk bed for our two 4 year olds. Obviously I need it to look cool, but more importantly not collapse on their impressionable skulls.

The width and depth allow for about 1/2" on each side of the mattresses. I'm most concerned about

I'm planning on possibly using corner glue/screw blocks (triangle shaped) to prevent affecting the mattress at all and 1.5" x 1.5" slat supports on both the uppers and lowers.

My question is, am I missing something that could strength the whole assembly? Will what I have planned be good enough? Is there a connector I'm overlooking. Didn't want to user metal 90 degree connectors because of the sharp edges but I could put them out of reach for the children. 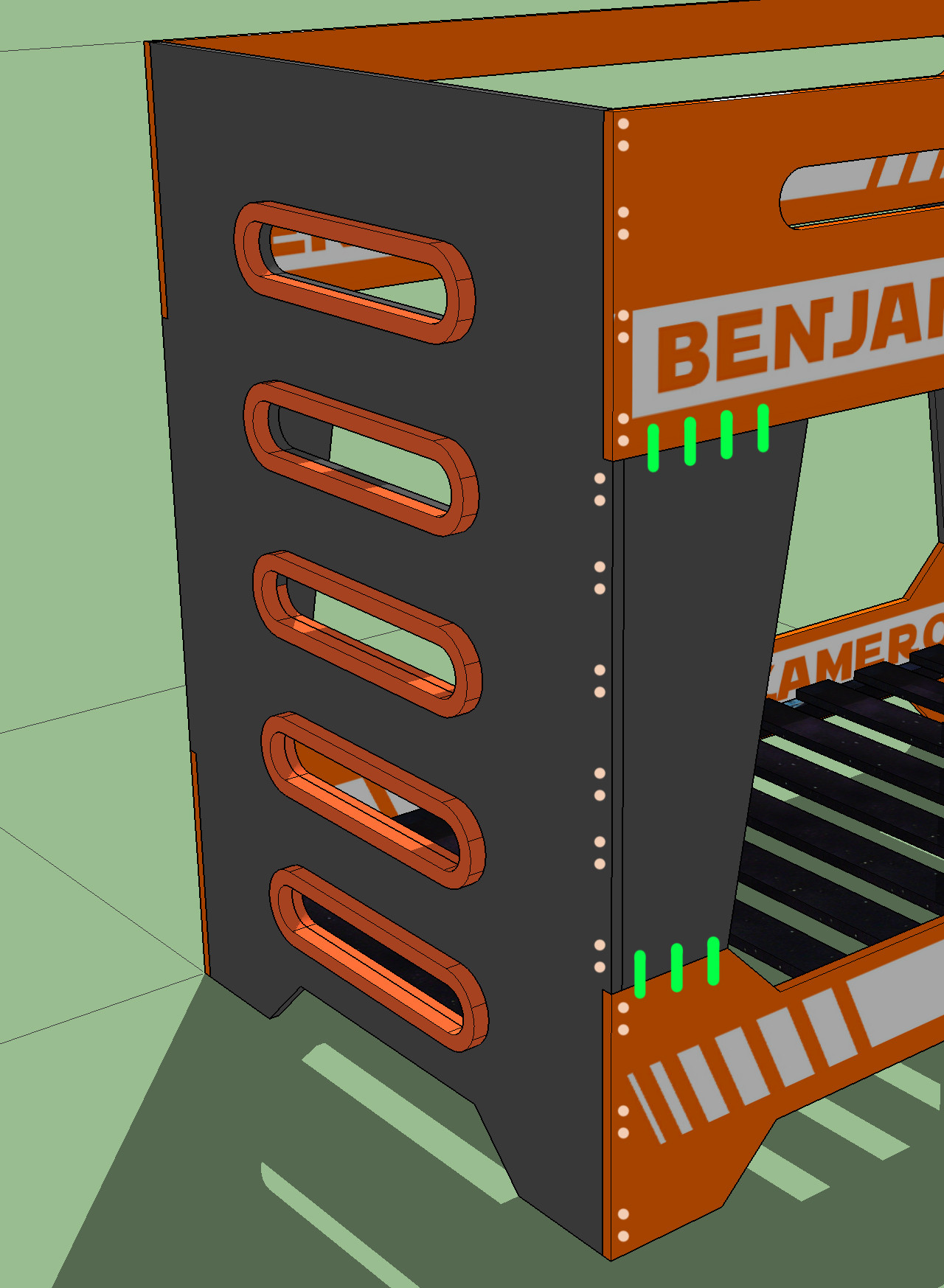 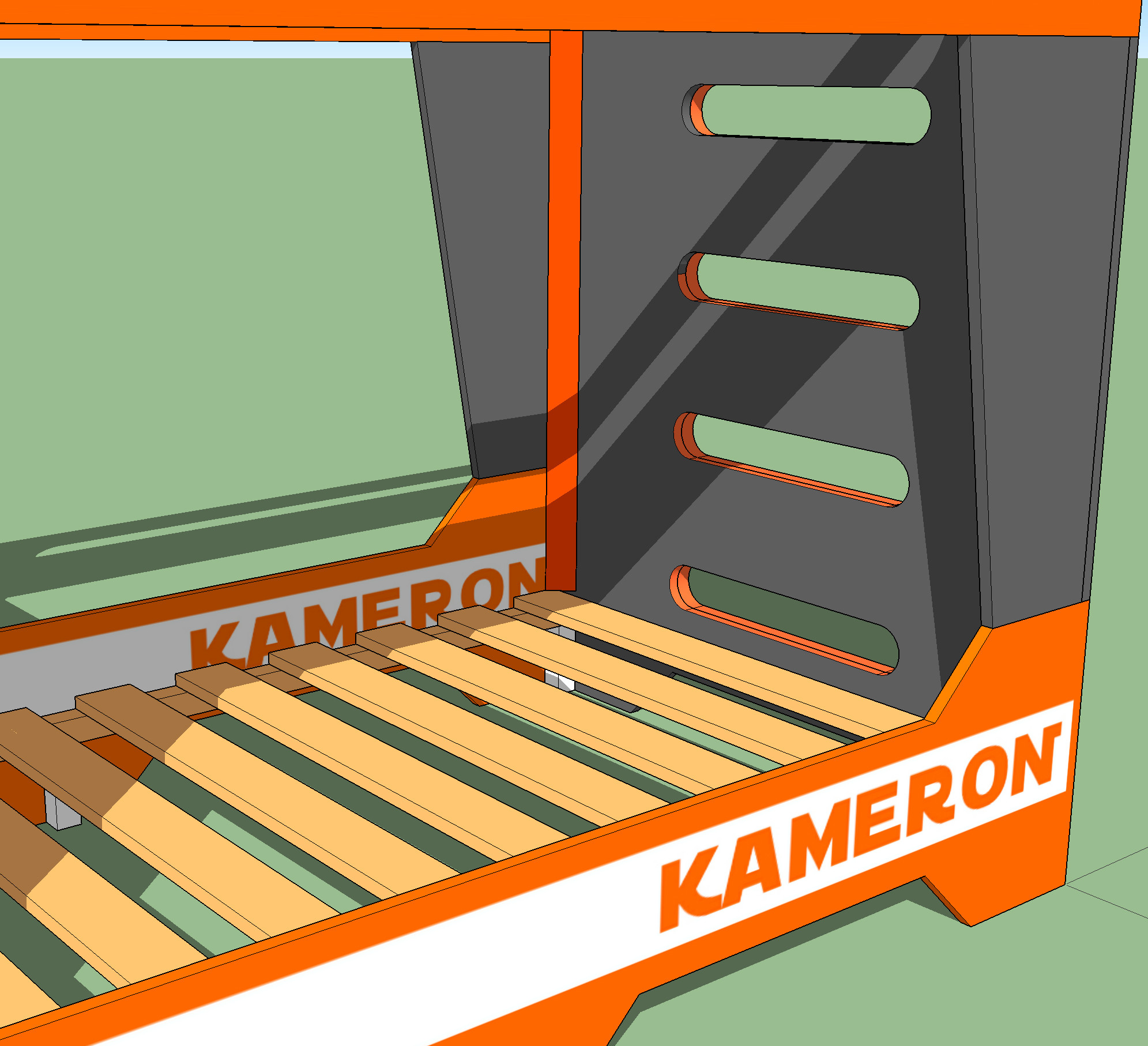 Actually you should seek to over-engineer this, or at least err on the side of stronger than you think you need, because it can't hurt given the dynamic forces this might be subjected to over time.

One key thing separate from the construction methodology is to make sure it's as rigid as possible to begin with because the least amount of play will put great stress on all the glue joints (which won't be as strong as you'd like because this is plywood), all the fasteners and on the dowels. So after it's put together you want it stiff enough that no racking at all occurs when you push, pull or twist it.

Corner glue blocks (either triangular or square in section) as you're considering are an excellent way of strengthening plywood constructions like this so very good idea to include some.

If you were just making a simple box (something like a blanket chest), the difference in rigidity before you put on the reinforcing blocks and after is like night and day.

Both glueing and screwing is advisable but note that for best strength you should screw through the ply into the block, not screw the block to the plywood.

My question is, am I missing something that could strength the whole assembly? Will what I have planned be good enough?

I think what you have planned would be good enough. But as I say it can't hurt to go stronger if you can identify weak spots. You only need to increase strength a small amount in key areas to greatly increase the strength of the overall structure because once assembled all joints mutually support the overall shape as in most furniture (where individual joints can be so-so but all together produce a very strong piece).

Didn't want to user metal 90 degree connectors cuz of the sharp edges but I COULD put them out of reach for the children.

I'm a big fan of these because of their strength, even though they are ugly. For this application their edges and corners are a bit of a worry of course. Probably the way to address that would be to mortise them into the plywood like butt hinges are.

Alternatively you could round over all the corners and arrises, which is easily done with a metal file as the brackets are only mild steel in most cases, which any decent metalworking file won't have any trouble with. I'd judge this would take less than 10 minutes for a set of four, but naturally it will remove any anti-rust plating they might have from the areas you work*.

*This isn't a big deal in a lot of interior applications and even if they do begin to rust slightly I can promise it won't progress far enough to undermine their strength within the lifetime of the bed. Even in an unheated garage in a damp climate it might take decades for that kind of rusting to weaken a bracket like this.

The easiest way to prevent racking would be to replace the slats at the head and foot of the mattress supports with a solid piece of plywood approx 1' wide that is solidly connected to the three sides of the bed frame it contacts. I would also suggest that the pocket screws could be replaced with solid dowels as well. If you have a table saw and a dado blade set you can create dadoes at all connections, skip the dowels altogether and simply glue the pieces together. Make the dado depths half the plywood thickness.

While this is a great design overall, I'd be a tiny bit concerned about the pocket screws resisting side to side racking. If you could make one (long) side out of a single sheet of ply, the other side could be pieced together.

In place of pocket screws, you could probably find a strong mechanical connector -- one for each corner, so 8 in total -- that would be childproof. The sort of thing I'm thinking of is a countertop joiner, though you'd want it smaller (as the pic is of one that is 3/4 thick). 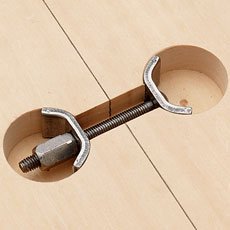 Not the answer you're looking for? Browse other questions tagged plywood strength racking or ask your own question.