Is it a problem if my countersink bit is slightly larger than it needs to be?

I just want the ability to countersink (occasional use) and I have 6-7-8mm head screws and I'm buying a single 8.3mm countersink bit (Makita HSS P-73542 3 flute). But what's stopping me from not drilling with it all the way, just stop when the hole reaches ~6mm diameter for example? Officially, does the countersink bit need to reach its "max" diamater, THEN (by pushing it more) make a tiny half-mm straight "wall" for the side of the screw head? If that tiny wall is needed or I need more precision I guess I could even finish it with a 6mm normal wood drill bit, no?

It's perfectly fine and common practice to use a countersink bit that is bigger than the taper you make with it, regulating the taper diameter by how deep you go.

A vertical wall above the taper is known as a counterbore (as it is also known when there's no taper).

It's actually standard practice to use a countersink bit that's larger than the countersink depression you will make in the wood, precisely because you don't want that little vertical side wall1 usually.

In the past 'rose countersinks' were one of the most common types (used in swing braces) and these could have heads 1/2" or larger in diameter and they were definitely not using screws with heads half an inch across most of the time :-)

But what's stopping me from not drilling with it all the way, just stop when the hole reaches ~6mm diameter for example?

It is usual practice for the countersink mark in the wood to be just deep enough to accommodate the screw head so that it sits flush with the surface2. This is a convention only but does tend to look neatest. Deeper countersinks (i.e. wider countersinks) can look crude or sloppy. Obviously this is if the screw head is on show, for non-show surfaces it really matters very little what you do as long as the wood hasn't been chewed up.

That's the second reason you may not want to do this commonly, once a countersink bit bottoms out there can be a tendency for it to start chewing up or burning the wood because it's not designed to go in further, but note that this is dependent on countersink design — there are four or five major types today from what I've seen on sale and they don't all work exactly the same. Here's a selection someone else lined up for comparison: 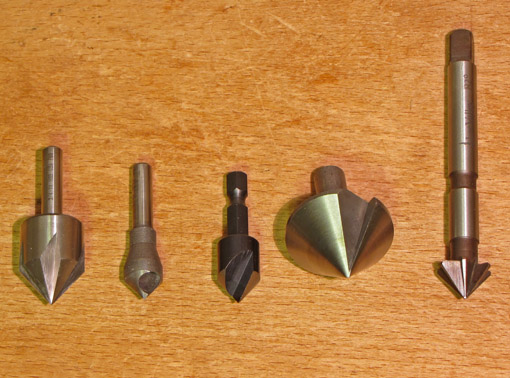 Source: Countersinks, poor to excellent on the Heartwood blog.

Also note that countersink sharpness is everything. Even the best design won't create clean, neat countersinks in wood if it's not sharp. All designs can be sharpened by the user with care, but HSS bits may need a diamond file or a small diamond plate rather than a common needle file or warding file made from hard steel.

Tip: with some designs of countersink it's best to do your countersinks first, then drill your clearance holes. If you drill the clearance hole first and then try to countersink at top as is most frequently done (and very often recommended) you can get bad chatter and it can create oval or uneven countersinks. But this needs to be tried with each countersink bit and in scraps of the wood you're using as the hardness and uniformity of the wood makes a difference here.

1 Where you do want that you're creating what's called a counterbore and for that you may not need to countersink at all. You could just drill a large enough hole to accommodate the screw head and then drill the clearance hole for the screw shaft in the centre of the hole formed. There are also combination pilot/clearance/countersink bits available to do all three operations in one go, a huge time saver if you have a lot of screws to do.

2 Next most common would be slightly deeper so the head of the screw sits just below the surface of the wood. You can countersink deeply, which is fairly commonly done when screwing into the top of workbenches as well as on jigs or workshop aids used with hand tools, to make sure that a plane iron or chisel won't accidentally bump into a screw head.

Not the answer you're looking for? Browse other questions tagged drilling drill-bits or ask your own question.

4
countersinking screws
8
What are the main different types of "hand drills"?
5
What joining methods would be best for the legs and other areas of a height adjustable desk?