Tips for Simple Inlay of Brass into Walnut

I'm wanting to try building a simple clock like 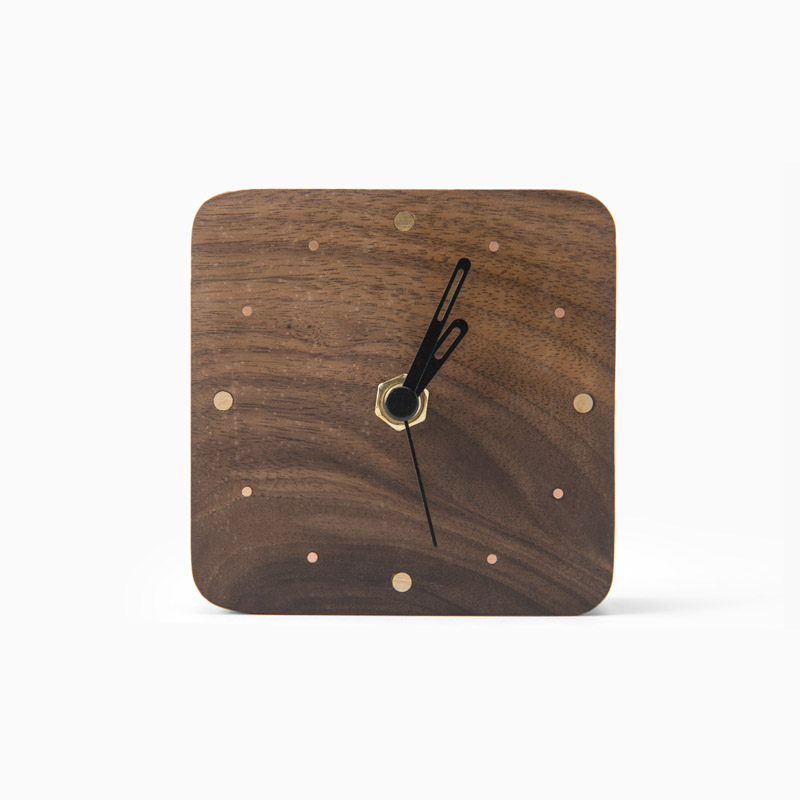 My question is about the brass inlays. From what I've found on the web, the process is drill perfectly circular holes for the inlays, glue in the small pieces of brass rod (tapping in so they are just proud of the wood) and sanding smooth.

First question about this is does brass sand away with regular sandpaper (say 120 grit) or does it require something special?

Also, what is the best tool for cutting brass? Will a hacksaw cut it?

Is there a particular place to find brass suitable for inlay? I found some options by searching for brass rod on the big ecommerce site, but I wasn't sure if that was a good option or not.

Any tips would be greatly appreciated.

First question about this is does brass sand away with regular sandpaper (say 120 grit) or does it require something special?

Yes it does but you'll run into a big issue with metallic particles being spread over the wood and possibly becoming lodged. The tiniest of recesses can harbour metal dust and you'll catch glints even from individual specs from various viewing angles forever, but worse is that American black walnut is an open-grained species so the entire surface is covered in potential sites for the metal dust to accumulate.

So the "just proud of the wood" bit in your description of the method I'd suggest is not the best way to go. Once you get some brass do a test and see, I'm sure you'll find it would be preferable not to sand it along with the wood.

Three options on the drilled holes
Most obvious and the one I was initially plugging is drilling the holes dead on the correct depth, which is easily done using the depth stop on a drill press or bench drill. It's more challenging to do consistently if freehand drilling but also possible if you're careful and use a depth stop of some kind (commercial or homemade).

Second options is making the holes ever so slightly too deep which would be preferable to doing them shallow since the wood will sand much more easily than the brass if then sanding everything flush.

Third option is to drill straight through and I think this is the best idea.

First and third options mean you don't have to sand the brass in place at all, and on top of that will allow you to polish the brass if you like, then protect the surface with a thin coating of lacquer before glueing in place, keeping it bright for many years to come. A mirror finish is easily created on brass, but I don't think would be feasible after in situ because you'd inevitably stain the wood with the polishing residue.

There are a few reasons I now think option no. 3 is the way to go. First is that you don't have to saw thin disks of brass but instead can use short lengths, which are way easier to handle. And you don't need both faces to be dead square since the rear face doesn't register with the bottom of the hole, saving a lot of effort.... even the lengths can vary without it affecting the top surface being dead flush :-)

Bit types
Forstner bits are the bit of choice for the larger holes (sawtooth bits that look similar to Forstners will also do a great job), and brad-point bits are a great pick for the smaller holes at 1, 2, 4, 5 etc.

Notice that in the sample clock pictured the larger holes aren't as uniform as they could be! The one at 3 o'clock is a lot off, which just shows how careful you have to be if you want a neat result.

Also, what is the best tool for cutting brass? Will a hacksaw cut it?

Yes, with ease, but in case it's not obvious the cut surface will require significant filing and/or sanding to smooth it off.

Note that there are various kinds of brass, some are 'free cutting' and will saw much more easily than others. But as a decent hacksaw blade can even cut annealed tool steel you should have little difficulty as long as you can hold the brass rod firmly in place so it doesn't move around while being sawn (this wastes energy and makes cutting go much more slowly, but also increases the chance of the blade binding in the kerf and potentially snapping as a result).

Lubricating the blade with a light oil (mineral spirits will work OK, you could also use baby oil or mineral oil) is a good idea and will help the cut go more smoothly.

Also note that for the thinner rod you may not be able to use the same coarser hacksaw blade that would work to saw the thicker rod because the teeth could be too large for the smaller diameter. If memory serves the rule of thumb is that you want at least three teeth in the cut (ideally more), so work out how fine a saw blade you'll want to use based on the diameter of the thin rod you end up getting. That same finer blade can then be used on the thicker rod, although it will saw more slowly it will give a better surface that requires less effort to clean up.

Is there a particular place to find brass suitable for inlay?

There are probably dozens of places you could get brass, including some craft or hobby stores. Online there's sure to be a seller or two on eBay and I've heard great things about OnlineMetals.com but haven't been able to order from them myself because shipping to Europe is a killer.

Edit for a follow-on query posted in the Comments.

Its interesting, after I posted the question, some time later I was thinking exactly about your option 3. I was trying to determine if such a solution would work. The back won't show, so no problems there. But, if you drill the hole all the way through, how do you hold the brass in place? I assume you would still glue it?

Yes it would be best to glue the brass in position. In theory you could go for a friction fit and because it's a clock that just sits there on the wall and isn't moved around much that would probably be fine, but best to at least tack the brass in place with a dot of superglue.

Sticking disks into shallow holes I'd have also recommended epoxy, but for just a holding something like this in position superglue would work fine, although if you have both epoxy is still slightly preferable IMO.

So insert the rods from the front, flush up their front faces with the wood (check with your fingers, not by eye as your fingers can detect even the slightest discrepancy that you can't see) and place just a dot of glue at the edge of a hole at the back, that's enough hold for something like this.

Bonus tips: if you ever wanted to reclaim the brass, for example because the wood got damaged from a fall and you want to make a replacement clock using the existing brass, the hold of epoxy can be weakened by heating. The heat from a domestic hairdryer should be enough to soften the epoxy, loosening its grip sufficiently to allow the brass to be popped free.

If you go with superglue there are of course debonders, but you can go low-tech and just freeze the whole clock. Superglue gets very brittle at freezing temperatures allowing even strong bonds to be snapped with ease, so either tap the brass lightly with a hammer or by gripping with pliers and twisting (at the back of course).

I would use a forstner bit matching the rod's diameter and a drill press for the holes.

Any brass should do as long as it is solid brass and not a plated brass item.

Once the glue has dried (epoxy would be my choice) file the brass down even with the surface. Then sand using a sanding block or other method which will keep the paper flat and has a hard backing. The idea here is to not sand the surrounding softer wood more than the brass. You can step down in grits until you get to a very fine paper. The finer sanding could be done with a sander as long as you are not removing a lot of material.

I have used hack saws to cut brass before. I have seen where some have used table saws, but I would use a dedicated blade if taking that route. And OF COURSE, eye protection! (Memories of a 7th grade shop class video of metal in a guy's eye. shudder)

If it were me, I would probably looks for thin sheets that I could drill or punch circles out of, rather than rods that I can to cut to short lengths. Then you could inlay them flush to begin with. Formica, Wilsonart, and several other laminate companies make brass laminates with or without phenolic backer. You can order samples on their website which should give you more than enough.

Then you could just glue them into shallow holes drilled to the same depth as the laminate thickness.

Not the answer you're looking for? Browse other questions tagged sanding hand-saw inlay or ask your own question.

5
What are the ideal traditional tools to use for creating an inlay?
2
Substituting Walnut for Hickory in a bow saw