I own a Hitachi C10FCE2 10-inch miter saw, it is my first miter saw. I'm a woodworking beginner but learning fast. I recently installed a "Makita A-93681 10-Inch 80 Tooth Micro Polished Mitersaw Blade" to replace the pretty crappy blade it came with.

I just noticed today while cutting some 3/4" cherry for a box that the miter saw isn't cutting a flat edge, even though the edge seems to be square. I've calibrated all of my tools to an obsessive degree. I have several accurate engineer's squares, double squares and combo squares that all agree with each other, and they (plus a digital angle gauge) all agree that the miter saw blade is perfectly perpendicular to the back fence and the floor. I didn't really expect a discrepancy, so I hadn't been meticulously checking the resulting wood. Thus, I don't actually know whether this problem has always been here, or if it appeared some time down the line. I only bought it a few months ago, and the blade just a few weeks ago.

The "problem" I speak of is not that the cuts are off square in the traditional sense. A try square doesn't show significant deviation from square. However, when I place the two halves of a fresh-cut bit of wood together, they don't line up smoothly along the entire surface. There's sort of a gap there that is most prominent on one side. There's also some blade marks that are deeper than they should be, so much so that I can feel some parts of the end grain are a few thous higher than others.

I switched to my crosscut sled after noticing the problem and my ends are nice and square and flat again. Does anyone know what this is, if it can be fixed or if I need to dump the saw and/or the blade? Is it my technique, machine setup/calibration, a hardware fault or something else like I messed up installing the blade? If the blade is the culprit, I might still be in the return window for Amazon. If I had a shooting board I'd probably just clean up my ends, but until then I depend on a clean cut right off the saw.

FYI, all parts of the saw are tight with no play/wiggle where there shouldn't be. My technique is to push the wood against the back fence and down on the widest part of the saw bed, clamp the wood down, spin the saw up to speed, slowly drop the saw through the wood while applying light pressure down and back to keep it square, stop when it reaches bottom, wait for it to stop, then lift it.

I took some pictures of the gap and also the end grain, though the saw marks probably don't even show up in the pics. 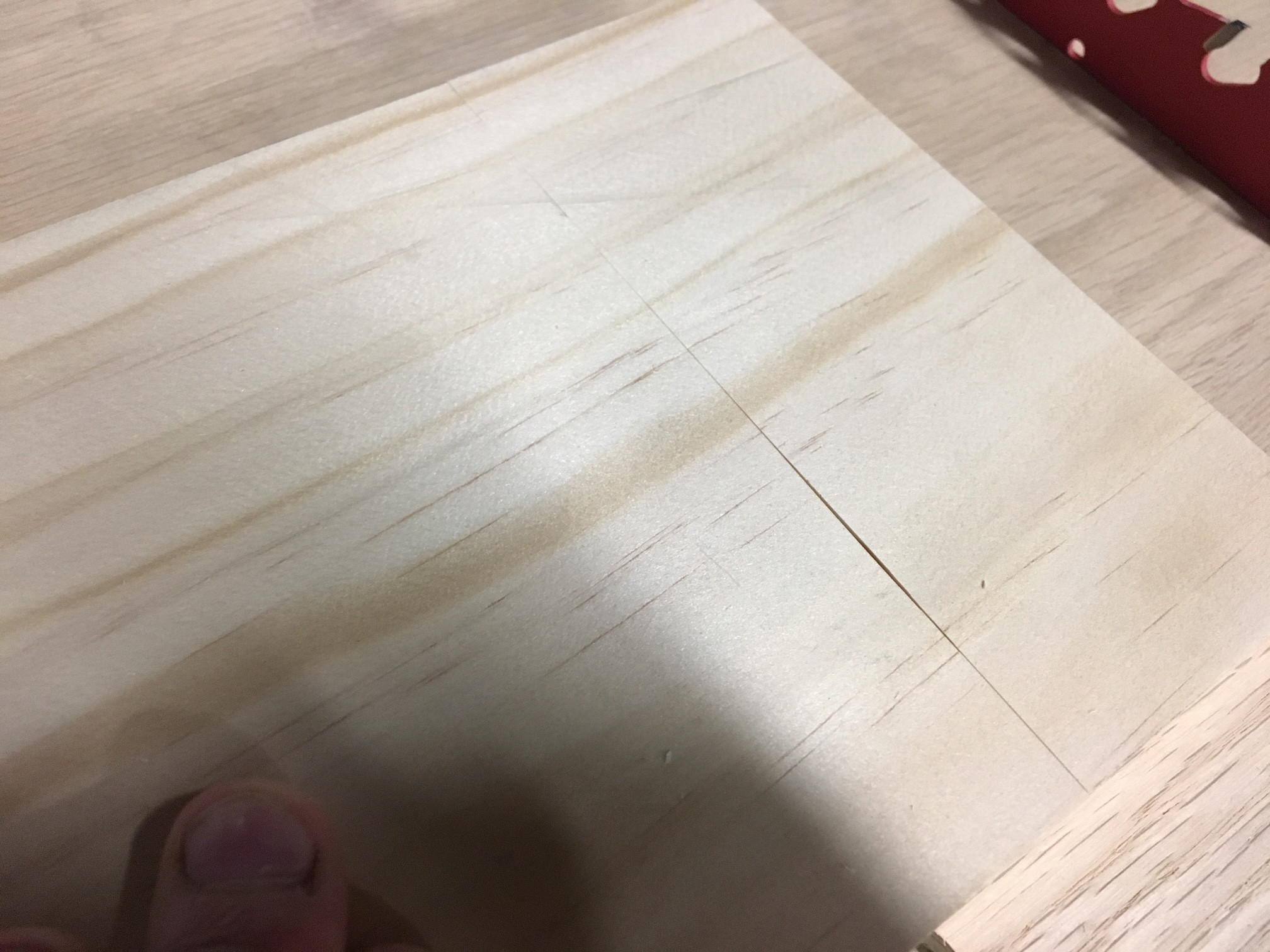 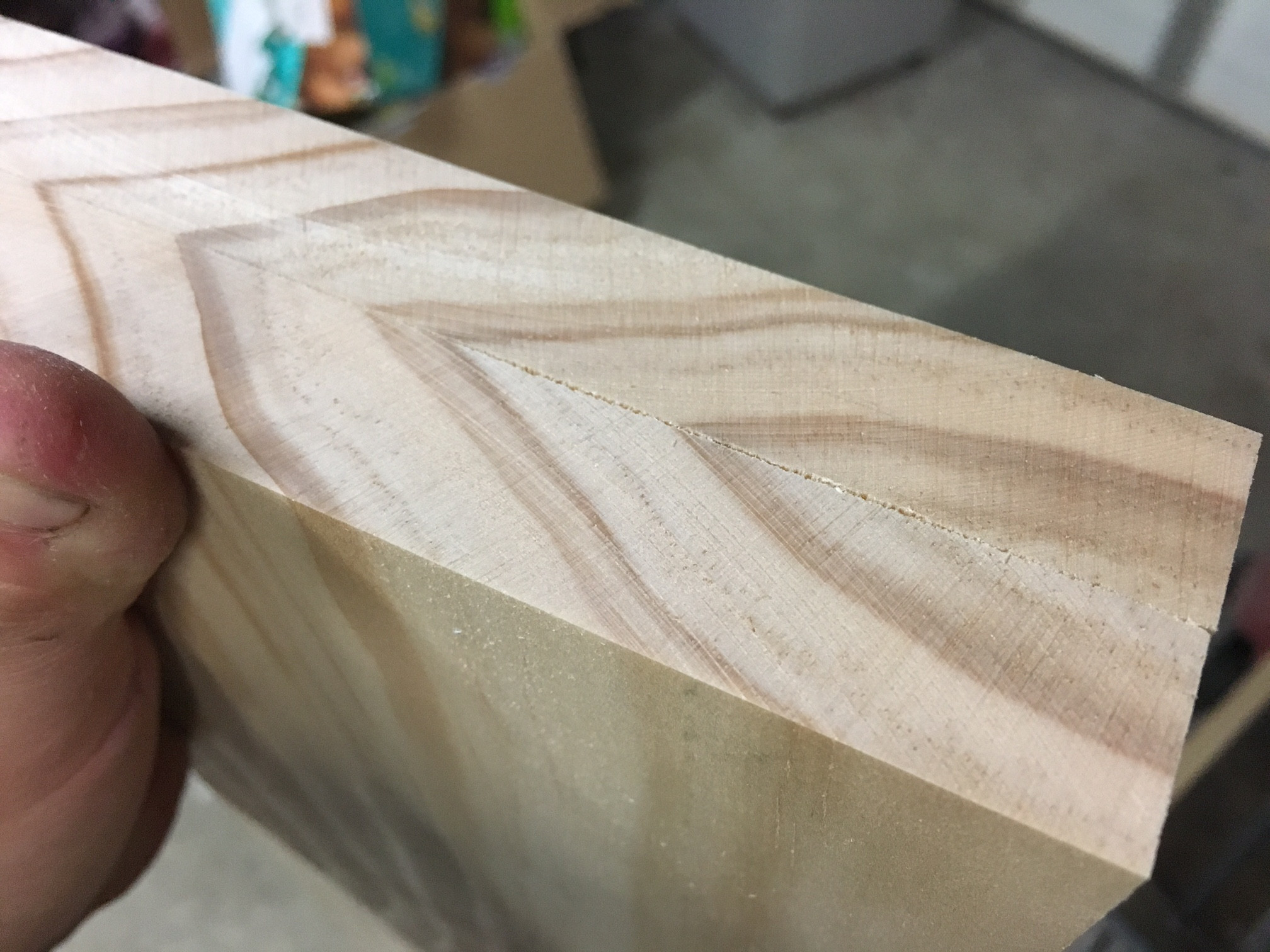 Man I've spent way too many words describing this.

Based on your last comment, return the saw. This is not something you're likely to be able to fix easily.

This is a decent saw that usually cuts much better than this, you should feel comfortable exchanging for another one of the same model, this sounds like a freak one-off defect.

You're expecting too much from a $120 saw and $35 thin kerf blade. Power tools in this price range just aren't manufactured to ultra-tight tolerances because there is a point of diminishing returns for the manufacturer, and they start cutting corners in some places in order to hit a certain price point.

You can try cleaning your arbor or replacing the washers on either side of the blade with higher-quality ones. You may be able to tell if the washers are not flat, or if one or both is inconsistent in thickness from one side to the other.

If you're getting 4-5 thousandths of an inch runout (slightly more than the diameter of a human hair) along some parts of your blade, that means mating 2 cut pieces may give you a gap as wide as 1/100 inch. Most people wouldn't pay attention to a gap this size when looking at installed crown molding from 4+ feet away, but even so, carpentry projects inherently have some amount of slop because time is money, and a skilled carpenter will have plenty of techniques for working around and hiding imperfections where it matters.

On top of that, whatever you measure with the blade in a static state most likely will differ when the blade is spinning at 5000 RPM, especially with a thin kerf blade whose plate will be less resistant to flexing than a full-kerf blade. Based on your experimentation, it seems this is not the major factor since the original blade produces the same results.

Considering the workarounds, you don't need to buy a $400 shooting plane; you can just as well use a $30 hand plane and shooting board, or clean up the edges with your crosscut sled.

That said, there is no reason to throw out your miter saw. At some point you may want to crosscut a very long board, which will be awkward on a table saw and may require you to move your table saw or rearrange your shop to accommodate the operation.

Not the answer you're looking for? Browse other questions tagged technique power-tools cutting miter-saw or ask your own question.

8
Is there a certain way to cut a 2" thickness piece of wood on the miter saw?
5
What level of inaccuracy is considered tolerable for a miter saw?
7
Making safe cuts: Sliding miter saw vs Radial-arm saw
4
Miter saw slightly hits plastic kerf when cutting at 45°
4
Miter saw does not cut all the way through
3
Hitachi Miter saw slows down and stops while cutting bamboo flooring
5
Can I cut an acute angle, mid-stock with a mitre saw?
0
Miter saw blade leaves some of its paint on the board
4
Sliding miter saw's kerf too wide at one end of board