I am building a farm table and it seems that the standard joinery method for the breadboards is mortise and tenon. M&T intimidates me a bit, so wondering if a half-lap breadboard would function well. The breadboards would be about 5-iniches long. It doesn't seem that half-lap is used often for breadboards, but I did find this table that uses it. What do you guys think? 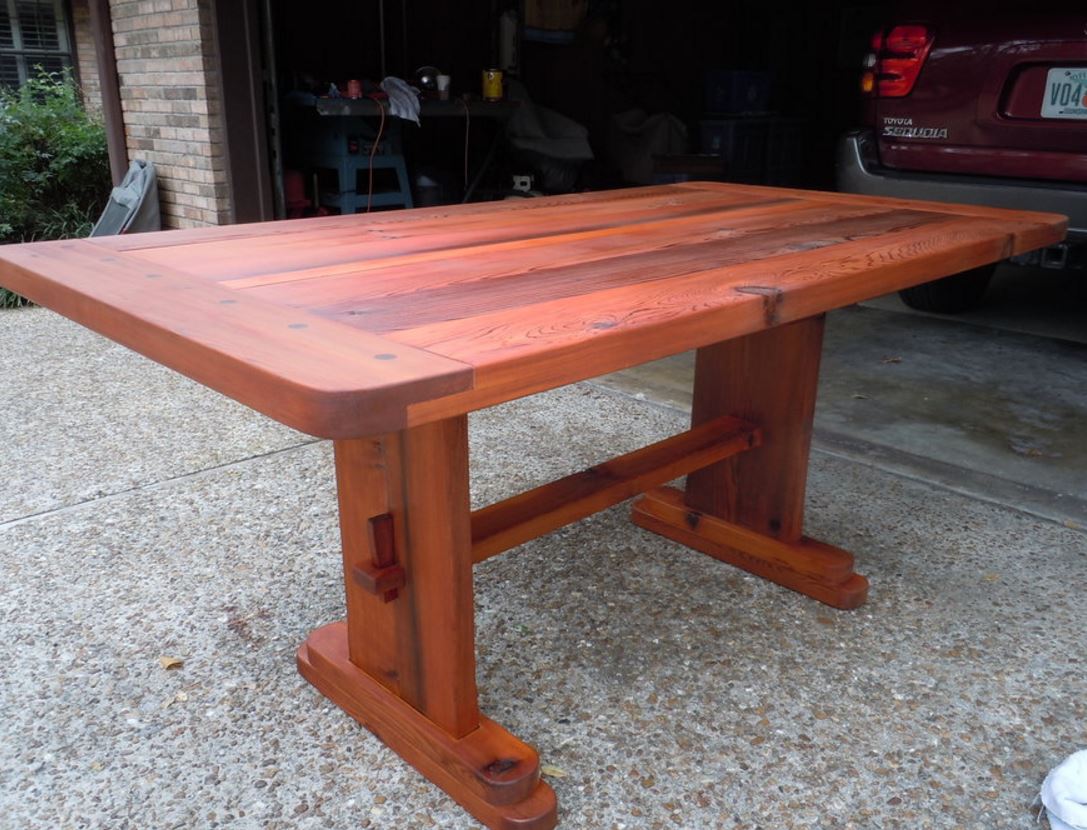 The main purpose for the breadboard feature is cover the end grain edge of the top and to keep the top surface from curling across its width by locking it into the plane of the breadboard edge piece. The most common way to do this is with a mortise and tenon. The problem that arises is that the top surface will expand and contract in width as the seasons change while the breadboard end will not change length. To accommodate this difference in movement, the top is only glued into the mortise at the center allowing it to slide as the width of the table changes relative to the edge.

For the table in your photo the top must be fastened to the edge board at each plank. The expansion/contraction in the top is accommodated by providing a small gap between the planks. I would estimate that a gap of approx 3/16" between each plank should do the trick. Having the gaps between the planks is fine for an outside table since it allows for some drainage when wet. If you want avoid gaps in the top then a mortise & tenon breadboard is required.

Yes of course you can, the picture you included shows that, the real question is whether you should :-) That there are very few other tables with breadboards ends attached this way should tell you something.

We don't know important details of the Lumberjocks project you posted as there are no build pics included, and no photographs of the underside, but from the brief written description it could be interpreted that the breadboards were glued in place which would be all kinds of bad on most tables. But beyond this, on a standard table with a glued field the half-lap joint isn't capable of doing what breadboards are specifically intended to do, which is resist bowing in the top while simultaneously allowing it to expand and contract as needed.

General note: don't take photos of a completed table sitting there looking good as any sort of 'proof of concept'. Many improperly built pieces of furniture look just fine in the photos of the just-completed piece, but what about six months or a year down the line?

M&T intimidates me a bit

The standard M&T joint for a table like this is challenging to form with hand tools so it's natural to have some trepidation, although if you have major power tools at your disposal it is really a by-the-numbers operation.

But anyway what I think you should do is give serious thought to leaving off the breadboards entirely. They're not a necessary part of the structure of a table. They can in fact be considered more of a decorative/style element (especially of utilitarian or 'country' furniture) as shown by their absence from the great majority of other solid-wood tables.

So unless you're wedded to the idea of breadboards I'd discard them from the design. You can in their place attach battens to the underside of the table (making due allowance for movement by making slots at both ends for the screws to ride in, not plain drilled holed, see Stabilizer for softwood tabletop that bows) or simply use enough hardwood buttons or other fasteners to hold the top flat (three or four per side should do it).

If you want to keep the breadboards then in place of a mortise-and-tenon joint you might consider a floating spline instead, which simplifies the construction but retains much the same functionality.

Suggestion: split the difference, if you will excuse the pun. Do a quarter lap from each side. Or do a half-lap as shown here, but with another board across the bottom. Or just do tongue-and-groove, or even sliding dovetail, rather than a closed-end mortise. All of these simplify the task to simple dado or rabbet cuts, while providing the top-and-bottom clamping of the breadboard end. Affix, as usual, to allow wood motion as the table width changes with humidity.

Not the answer you're looking for? Browse other questions tagged design table-making or ask your own question.

12
How do you make mortise and tenon joints using power tools?
9
Stabilizer for softwood tabletop that bows

11
Wood to Use for 3ft Sorority Letters
4
Is making a breadboard table top using just pocket joinery asking for future problems?
0
Can these tree tunks be used for a small table?
1
How likely is it that my kids will break this bench?
1
Can breadboard ends hold together a tabletop without glue?
1
How many pairs of legs necessary for butcher block table?
1
Half-lap joints for day-bed build?
5
What type of board material can I use for a gaming table's play area?