I'm designing/building a bunk bed for my toddler boys. Given that I am working under small constraints in their bedroom, I was thinking about using barrel nuts to piece together the two long sides with the two short sides instead of just nailing or screwing the whole thing together. That way I could build, sand, stain, etc all the pieces outside of the room and then connect the four sides via barrel nuts, simply, inside the room.

My question is: are barrel nuts safe to use for such a construction? Would they be equal to, or greater than, nails/screws in terms of strength?

I am obviously wanting to build something that is strong enough to be safe for my children, so any answers/suggestions you may have are very much appreciated. Thank you in advance.

A Sketchup file of the project

This is what I am referring to as a barrel nut. 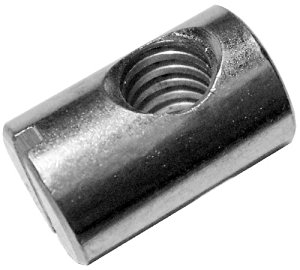 Yes barrel nuts are strong enough for this application. However, they're not your only option.

Would they be equal to, or greater than, nails/screws in terms of strength?

Like so many things it depends. To begin with the size of barrel nut you're comparing to is a variable, obviously the larger they are the stronger they are.

Nails are a good first point of comparison since screws are widely known to be stronger. But nail type and length matters (just as it does with screws) but with nails perhaps most important of all is how they're driven home. If you 'dovetail' or 'toenail' the nails in the strength of the connection is increased hugely compared to every nail being driven in at 90°.

For what you're looking to do some kind of screw-in / screw out connectors do seem the ideal choice though. And IMO no major connections in indoor furniture should be done with nails any longer, that's for rough carpentry and outdoor pieces only these days.

Since you're willing to do the drilling for the barrel nuts it's little extra effort to drill for the insertion of hardwood dowels instead, which can be used with conventional screws to provide essentially the same build, the same ability to be taken apart* and may actually prove stronger and more stable long-term: 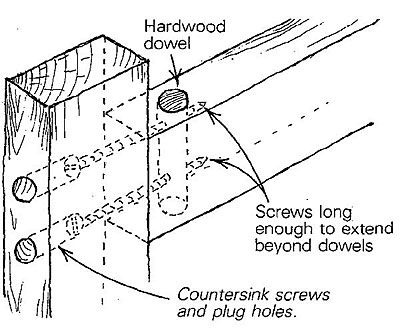 Source: Fine Homebuilding. Note that where the drawing says to countersink that is actually a counterbore.

This method is also slightly more forgiving of minor issues with alignment, if that matters!

If you decide to go ahead with barrel nuts you might consider locking them with Threadlock or something to keep them from loosening due to vibration. But how prone to working loose the bolts will be is down to how closely they're machined as much as the amount of movement or vibration in the piece.

*Threaded connections in wood can usually be used multiple times without any loss of strength.

Not the answer you're looking for? Browse other questions tagged safety furniture or ask your own question.

5
What joining methods would be best for the legs and other areas of a height adjustable desk?
2
When to use dowel/barrel nuts + machine screw VS wood screw + hole?

12
Are there any alternatives to a SawStop?
8
What are strong methods to secure a stripped wood screw in hardwood?
6
Are active charcoal air filters effective against finishing fumes?
4
What are the name and origin of the woodworking style used for this wooden cabinet with rounded features?
4
What are these wooden posts?
3
How can I be sure my workpiece feet are level, when my workshop floor isn't?
2
What kind of wood is thin enough to cut with a knife, but strong enough for doll furniture?
3
Why are bed slats not attached?
0
Calculate the size of furniture which are available in the picture
2
base for “standing table” strong enough?