ARGGH. A plumbing leak managed to drip directly on top of my brand-new table saw, in exactly the right place to ruin the user's manual -- but worse, it seriously rusted a square foot or so of the otherwise pristine polished cast-iron top.

Right between blade and fence, too.

1) Is there any good way to recover from this? Or should I give up and order a replacement top?

2) And is there any good way to reduce this risk in the future? Should I have kept a tarp over the beast? Unfortunately this is the best location in the shop for it, but...

Is there any good way to recover from this? Or should I give up and order a replacement top?

I doubt you'd need to order a replacement top, no matter how bad the rust seems to you compared to the pristine surface around it. People have restored Craigslist finds where the rust was old and far more pervasive than what you're facing...... and the after photos sort of speak for themselves I think: 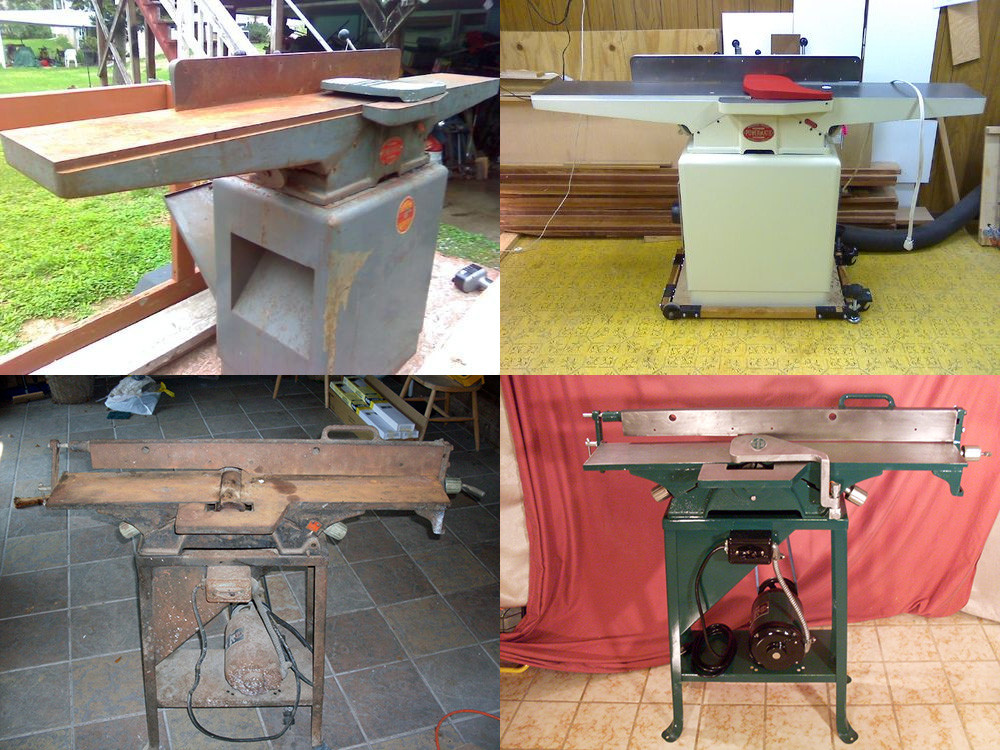 Once the surface rust is gone discolouration may bother you since the saw was so new, but the main practical issue is of course pitting. It's a safe bet that the rust won't have progressed far enough that any pitting left behind is a dealbreaker based on all the rusty garage/barn queens posted online that have been brought back to working condition!

Removing the rust
So the main way to deal with this is abrasive methods. You could take the bed off to immerse it in a rust-removal soak or to do electrolysis but it's very unlikely to be necessary to go to that extreme.

Remove the loose surface rust first by scrubbing with coarse steel wool or a Scotch-Brite, lubricated with something oily — mineral spirits, WD-40 or some oil (baby oil is just fine if it's all you have). Then wipe clean and assess the bed surface.

If there's some minor pitting you could do some sanding but only if you want to, once the active rust is gone you can pretty much leave it if the slight discolouration doesn't bother you. Some pitting usually doesn't affect function in any way that you'd notice so it's not actually vital to remove it.

So after tackling the surface rust you can apply a fresh coat of your usual waxy or oily rust-preventative and put the saw straight back to work.

If you do want to sand, first response in this thread on Fine Woodworking's forum is well worth a read to reassure yourself you won't do any harm to the bed of your saw by sanding it.

And is there any good way to reduce this risk in the future?

A very thorough waxing might have helped, but almost no rust-proofers are intended to stave off rust when there's standing liquid water, they're mainly to resist water vapour. This is at working thickness, many things (including common paste wax and petroleum jelly) in a thick layer would have allowed the table saw to come through this unscathed but they're never normally applied at that level of course.

Hopefully the rust has not been developing for too long before discovery. A while ago I discovered some rust on my table top due to a cup of water carelessly left on the the top and knocked over by the cat. I had not been in the shop for several weeks and the water had dried leaving a large rust spot. I used a buffer with a make-shift steel wool pad to clean up the surface. One small area required a 320 grit sanding block to finish up. In a separate case restoring some cast iron planes I used a liquid rust remover to deactivate some rust in pitted areas. The rust remover does result in a tarnished appearance, but over time with additional buffing it has come back to a uniform appearance. In all cases I now use a paste wax to protect the surfaces and reduce exposure to humidity etc. that might encourage the rust to return. I renew the wax several times a year. I also never put liquids on my tops now!

Wow. Thanks to both Graphus and Ashlar, for the reassurance that this could be fixed and wasn't going to be a crisis -- especially to Graphus, for including the citations showing that even resorting to sandpaper wasn't likely to do significant damage.

Reassured by that, I'm using something halfway between sandpaper and steel wool: 3M's "stripping pads", which are basically a more-abrasive form of the Scotch-Brite (tm) pad. One of those, working on a surface dampened with WD40, is taking things right down to bright metal again. It's taking off not just surface rust but the places (especially under the soggy manual) where rust raised the surface. Looks like I'm going to be left with with just a few spots of pitting and some water "stain" (not rust, just slight discoloration) to remind me of my mistake.

Furniture wax, or Boeshield (or both?), to follow. Waxing tool tops is a Good Idea anyway; it doesn't just protect, it reduces friction and makes the tool easier to use. Waxing the bottoms of planes is also worthwhile for that reason.

(BTW, the reason they say don't use car wax on tools is only slightly because car wax has some abrasive; the big deal is that it often contains silicone, and silicone on wood has a bad habit of interfering with finishes. You shouldn't pick up much from a tool, but it's easier to just avoid the risk.)

Next high priority for the workshop: Try to modify the basement ceiling so that, if there is any water leakage from above, it will tend to flow to and down the walls rather than falling on tools. I've got a few ideas... And consider cutting up some tarps as "dust/drip shields" over the tools.

2
How do I fix rust spots on my table saw table?
0
Can you sand jointer infeed and outfeed tables?
1
Seal a 4" jointer bed

11
Using a cheap table saw
11
Table saw top treatment
3
Coping with uneven table saw table and inconsistent cut depth
14
How to clean and maintain my table saw top
3
How do I prevent my table saw fence from deflecting?
3
Table Saw Bevel Maths?
0
Submerge entire table saw in Electrolysis
1
Table saw blade keeps jamming and slowing down
2
What are the four holes in the top of my Craftsman 113 Series table saw?