I know what they do, cutting the wood and can be used for fancy cutting and stuff. But I do not know which one to get for starters. Which would get the most use out of? Do I need to get both? What are the big differences for each.

Obviously both of these saws can cut curves but past that they have little in common. For general cutting of wood no question you'd get more from a bandsaw.

Bandsaw
The bandsaw is, in the opinion of quite a few owners, the single most useful power saw to own. It's a good contender for the only power saw to own if you had to pick just one.

It may not be the ideal starter saw (power saw) but I don't know what I'd vote for instead. Certainly not the table saw, even if only because it's the most dangerous power tool.

Scroll saw
A scroll saw is basically good for scrollwork, it excels at it because it's a specialist tool but it's of little use for anything else. All the joint-forming cuts that can be done on a scroll saw are better cut using something else for the required accuracy and smoothness.

If you only need to cut intricate curves periodically it is hard to justify the cost of a scroll saw (both monetary and the cost in space it takes up). Although there are some inexpensive models available buying a coping saw and a fret saw, along with packs of blades for both, should cost less and they are perfectly capable of doing the same work, just much more slowly obviously. And in addition they can do a few tasks that you couldn't do on the scroll saw so they're more versatile.

The diameter of the cuts achievable with each saw are not generally comparable. With a scroll saw you can do small, intricate in-and-out curves, as fine as anything required in woodwork. A bandsaw can generally only do relatively large-diameter curves, the width of the blade determining the radius of cut: 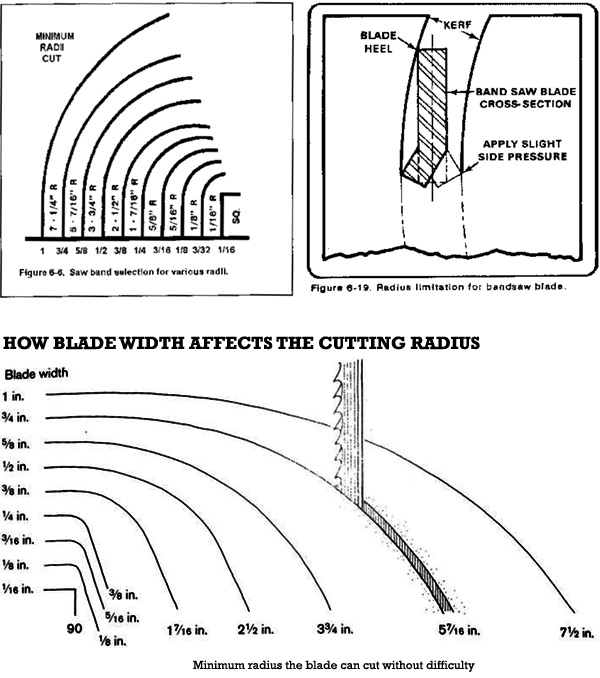 Note that the narrower the blade fitted to a bandsaw the less useful it is for general-purpose cutting because that blade is one specialised for curves. And the wider the blade fitted the better the bandsaw becomes for doing straight cuts (very wide blades being particularly good for deep resawing work).

Not the answer you're looking for? Browse other questions tagged power-tools tool-selection or ask your own question.

8
Are there any differences between jigsaws, sabre saws, or scroll saws?
17
Does it matter what kind of diamond stone I get?
11
What should one consider when purchasing an intro turning chisel set?
6
What is the difference between a worm and sidewinder drive circular saws?
9
What determines carving tools/chisels quality?
5
Choosing a saw for oak worktop, considering future usefulness
1
How is this large and intricate piece made with such precision?
4
Bandsaw vs Table Saw
2
What are the pros/cons of HSS vs Chrome Vanadium in drill bits?