I know this is really basic, but I'm struggling with the corner joints on the drawers. The reason I'm practicing is ultimately I want to build a few storage cabinets with about 40 drawers total = 160 corner joints I'm going to have to make. I'm trying to come up with a workflow that is both quick and precise. I also really want the joint to be hidden. I'm not too concerned about super high strength.

The relevant tools I currently own are:

There's countless ways to join corners in theory but in reality I'm actually really having a hard time with even the most basic stuff. The techniques I've tried so far have been mostly successful but not quick or easy -- at least not as quick and easy as I'd like them to be -- and also pretty error prone:

So how can I do this, in reality, given that e.g. my grandfather hasn't been passing on his mystical woodworking knowledge to me for the last 35 years of my life? I'm just a normal person, not one of those legendary woodworking samurais who can hand-cut perfect dovetails in 5 seconds, while drunk, with their eyes closed.

I'm really struggling to find a quick and precise technique given my current set of tools and fine motor control skills. It's easy with large pieces but the 3" x 7/16" plywood seems to be introducing new challenges.

It's actually very difficult to keep the joint flush and straight while at the same time somehow positioning the block in the corner, putting two clamps on, and not getting glue everywhere. It's really easy for this joint to become not flush any more.

Butt joints are inherently prone to shifting about as you're trying to clamp, glue is very lubricative and it's just two flat surfaces trying to slide past each other.

Like anything you'll get better at juggling things with practice and by slightly improving how you go about it. For example without any other changes to your current setup you could have an easier time of it, e.g. by using more and/or different clamps — quick clamps shift slightly at penultimate grip point, four smaller clamps allow for much less shifting or rotation than two large ones. But best and simplest of all, clamping firmly to one board before you've even applied glue. Yeah I didn't think of that last one early on either, obvious though it is.

In addition there are a few simple things that can really help you out here. The most simple being a larger block. If it's nearly the full 3" height it gives you a much larger registration surface so reduces the ability of the drawer pieces to rotate on the horizontal axis.

One step up from this, build a dedicated right-angle clamping fixture specifically for this drawer size. Same basic benefit of the much larger block but slightly lighter and easier to manipulate.

Or best of all, make yourself a set of something like these: 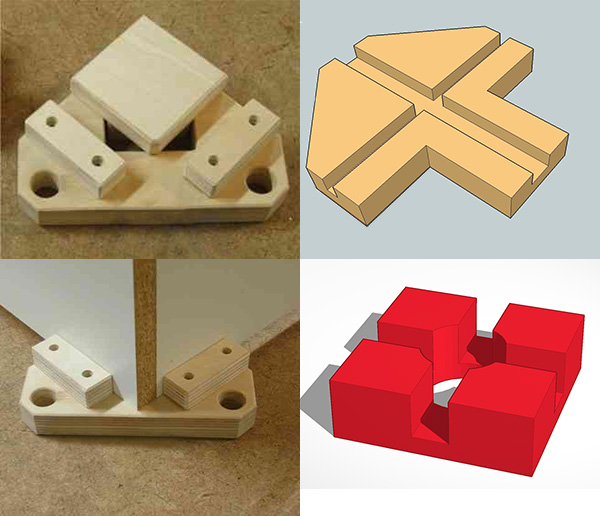 As I hope is clear from the picture you can form the grooves by glueing and screwing blocks in place on a base board, or routing crossing dados at a perfect 90°, whichever is simplest for you.

Also have a look at the version locked by wedges, such as this one on Lumberjocks, reducing the number of clamps being tied up during the process to nearly zero.

It's impossible to wipe wet glue off the interior corner, and it tends to squeeze out and be forced along the wax paper and make a big mess.

You can try applying slightly less glue to the inside edge to try to limit squeeze-out on that edge, but the first thing I would do is ditch the wax paper. You can get away with this by relieving the inside corner of the block or clamping fixture, so the glue will just squeeze out and stay put (to be cleaned up later, at the rubbery stage or after hardening).

I think butt joints have a lot to recommend them for quick-and-dirty drawer construction where you don't need a lot of strength. It's very easy however to add something to them to take them up a notch, making the joint very much stronger while allowing for perfect registration during the glue-up.

Biscuits are obviously one of those.

It's tricky to design everything so that the biscuits don't interfere with the dados I've cut for either the drawer tracks or the bottom panel.

Don't use two biscuits. A biscuit is a linear alignment aid already so inherently helps to keep things straight. Two is overkill on a 3" joint face.

These are a favourite solution of mine because they're so simple and pre-date biscuits and Dominoes. They offer the same assurance of alignment, and reinforcement of the joint is just as good if not better, with the key benefit of requiring no specialist (expensive) equipment to be bought. At the most basic you can do it using one drill, one bit and some dowel rod*.

Drill holes, insert dowels: Aesthetically acceptable but a huge pain and has same alignment issues as just putting screws in.

One or more of the above tips should solve your alignment issues but if you were forced to work without aids something you can do to make drilling easier is instead of drilling after glue has been applied to make the joint slippery, do it before.

It seems like one additional step that just adds to the workload but you could set up a production line to do the operation repeatedly (the heart of all mass production) and you'd work through them all in no time. Then come assembly time everything is ready to go, greatly speeding up that part of the operation so you'd probably have a net gain in speed.

*Modified as needed, fluted or grooved and with the leading edge chamfered.

4
How can I flute my own dowel or create dowel with similar properties
3
Can a 23g nail gun satisfy all of my needs?

8
Corner butt joint, longer top or longer sides?
3
Can a Biscuit Joiner Make T-joints?
12
Mortise and tenon joint proportions for 3 wooden beams corner
4
What are my options when laminating wood with butt joints?
1
Half lap joints with Dremell 231 Shaper/Router Table
10
Not-so-obvious disadvantages of butt joints
4
How do I cut this corner joint?
4
Pocket holes vs screwed butt joint
2
Easy drawer joints for plywood
2
Doweling technique - can they be applied in two stages?