Load Bearing of Legs and Wood Movement on TV Console

My dual questions are: 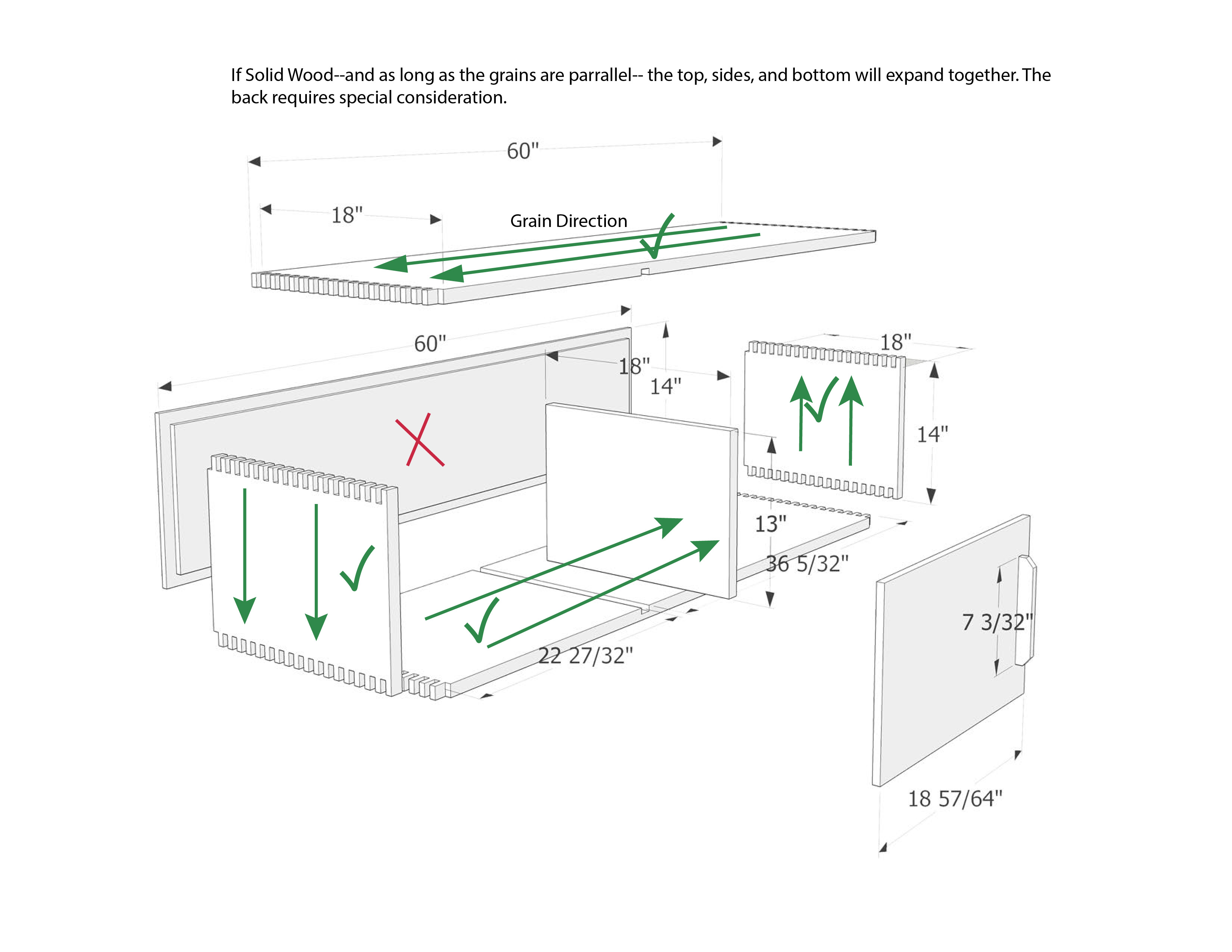 are the 1 1/1 inch legs enough to support the structure as drawn?

Yes the should be, but species matters. If the legs are cheap pine for example they won't be nearly as strong as if they were any reasonable pieces of white oak. Just to note that you will need to cut the tenons to fit the mortises very carefully as any play will result in weaker joints*.

You might find this previous Answer worth a look, What is the strongest join for splayed legs?

How does a woodworker calculate load bearing for legs, especially

That's a good question and the answer is they usually don't. This is generally a seat-of-the-pants thing for nearly all furniture work. It's widely acknowledged that a lot of furniture is a little to a lot over-engineered, using material that's thicker than needed and with joints stronger than than strictly necessary. But together they give better assurance that something will hold up well to use and abuse over a long lifespan.

I have read a bit about wood movement due to humidity in an all, whole wood project. Do I need to account for this in my project or is that more restricted to items like tables/will the components of my piece move in unison.

Yes you need to account for movement. Only on quite small projects can you get away with ignoring it completely (if using solid wood).

If so, how would I adjust for that so I don't get a split?

There's nothing in the overall design that needs to be adjusted, but there are a few areas to pay attention to.

Vertical divider
In case it's not obvious you need to orient the grain of this vertically to match the case, so that expansion and contraction occurs back to front and not up and down.

If you oriented the grain on this horizontally at maximum expansion (during the wettest part of the year) the panel would exert enough force that it would probably bow the top and bottom, and if the back panel were fixed in place it could split it or tear it free from the case.

Back panel
I would recommend you make this from plywood or another board material.

If you make it from solid wood the grain must run horizontally and it would be highly advisable to make it up from quarter-sawn wood to keep dimensional changes within reasonable limits.

Leg assembly
This is a little over-engineered by the way. Two leg frames that aren't joined at all would be fine here, but go ahead with it as designed if you want the practice in the joinery. If you would like to simplify it slightly the cross-members can be joined with half laps/halving joints instead of with M&T joints which aren't necessary for strength here.

How you join this to the case is critical. Since the leg assembly is much like the legs and apron on a table, and the grain on the case is as it would be on a tabletop you should basically attach the two together in the same sort of way. See this previous Answer for two good simple methods.

*If this does occur you don't necessarily need to re-cut the components however. Instead you could glue using epoxy, which is a very good gap-filling adhesive (most common wood glues are not). Fill the epoxy with fine sanding dust to a thicker consistency if necessary, aim for a viscosity anywhere from around thick honey to that of mayonnaise. Use a slow-setting epoxy to give yourself plenty of time to work.

If you want even further security in addition you could peg the tenons through the face of the joint. Glue the tenons in first, wait for the adhesive to set then drill and peg.

17
What general considerations do I need to take into account for wood movement?
6
What is the strongest join for splayed legs?
5
Will these table legs support this table?

3
Weight bearing for a loftbed and wood only joints
1
Farmer Table Legs
0
How to reinforance purchased sitting bench with 250 load limit to 500 load limit
2
When do I need to support the center of a horizontal, load-bearing board?
3
Wood movement with L-shaped mitred leaning shelf
3
Will a tabletop bolted to slotted angle brackets have problems with wood movement?
1
Wood bench legs are uneven at Christmas but even at Thanksgiving
3
How to attach 2.5" bench top to legs