I have a router with fixed and plunge bases, and a handful of bits. I have not yet used the plunge base, but I will need shallow plunged cuts for my next project. Can I use a bit I already have, or do I need to buy a new bit?

Specifically, I have this set from Rockler. I am considering the smallest bit for this task. 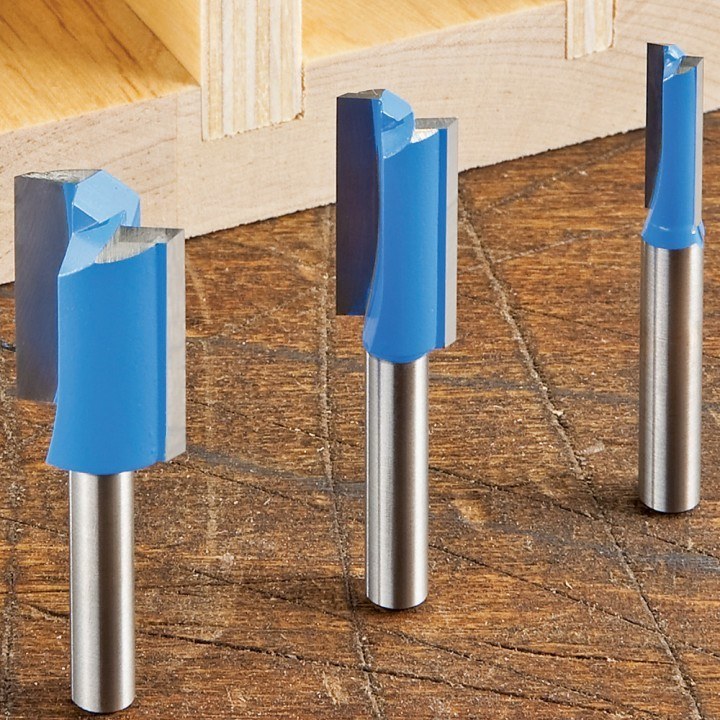 I know that you cannot plunge a bit unless it will cut across the bottom. I don't see many bits that are advertised as specifically made for plunging, although many others do appear to have a bladed surface on the bottom.

These bits don't have sharp blades all the way in, but the shape looks like they would still remove material from the center, then flatten the bottom as I move. Are these OK to plunge? Is there any risk of danger or damage in attempting a plunge with an incorrect bit?

I have found a video using a drill to remove the center material prior to plunging in with a "standard straight bit". Clearly it works in the video, but I'm wondering as well if there are limitations or specific safety issues that I should be aware of before attempting it myself.

I think these bits would work exactly as you're describing. If you're plunging to a shallow depth and then moving across the work piece, the center that wasn't removed in the initial plunge gets removed by the cutters as you move the router.

The only problem I've had with bits that don't remove the center has happened when I was trying to make a deep-ish plunge without moving the router bit. Then the center hits the bit and prevents you from finishing the plunge cut. But these bits don't look like they'd have that problem, though it's hard to tell from the angle of the picture.

Ultimately, I'd recommend trying it out on a scrap to see whether they work. From the description of the cut you are planning, I think you'll be fine, but testing on a scrap is always the best way to know for sure.

I am not aware of any bits that are designed for plunging per se, but normally when I make a plunge cut with a straight bit, the exact bit I choose depends on which surface I am more interested in having come out clean. If I want the bottom of the cut to be the cleanest part, I would use a spiral upcut bit. The flutes on these bits are cut in a continuous spiral around the bit shaft, which helps evacuate chips as they are cut. Spiral upcut bits leave a clean surface on the bottom of the cut, at the expense of having a small bit of raggedness on the top surface of the cut.

If I care more about the surface being cut into more than the surface at the bottom of the cut, I will just use a regular straight bit.

There are also spiral downcut bits, which are similar to spiral upcut bits, but have the flutes running in the opposite direction. These leave a very clean cut on the surface being cut into, but require a slower feed rate than spiral upcut bits, and are better suited for more shallow cuts. As for myself, I've never had a problem with the edge cut by a straight bit, so I've never bothered to buy one. And for completeness, I'll say there are also bits that combine spiral upcut and downcut flutes into one bit, but as far as I'm aware, these are usually quite a bit more expensive, and are mostly used for CNC operations that benefit from having a single bit that is good at everything.

Not the answer you're looking for? Browse other questions tagged router-bit or ask your own question.

17
Should I do many shallow quick cuts or a single deep slow one with my router?
2
Flush trim Router bit question
8
How do I remove a stuck router bit from a plunge router?
5
Is a long router bit safe?
5
Router bit used for this profile?
3
Router, how make a deep plunge cut?
2
Flush trim pattern router bit
2
Router bit without shank