I'm a complete newbie to woodwork - please bear with me!

I'm trying to build a free-standing fence or barrier that will sit on top of concrete similar to this picture: 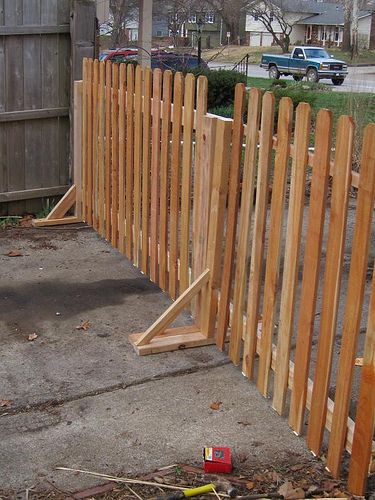 The fence I want to build is a bit taller - 6-8ft. How wide does the "feet" of the fence have to be to keep it from falling over in the wind? I'm thinking about putting support braces in the photo like the picture - do they have to be on both sides of the fence and what size and height does the brace have to be?

How wide does the "feet" of the fence have to be to keep it from falling over in the wind?

There are too many unknown variables to be able to get a definitive answer on how long the "feet" need to be, but if you guestimate the dimensions of the fence in the photo and multiply up to your possible heights it would at least give you a starting point.

I'm thinking about putting support braces in the photo like the picture - do they have to be on both sides of the fence and what size and height does the brace have to be?

Yes you need braces, yes they need to extend outwards on both sides of the fence because wind loading can come from either side.

My guess is if you make the fence the full 8' tall and scale the supports up the feet would end up much too long to be practical. Anything much longer than those shown could be awkward to move around.

As an alternative you could add weight to the bottom of the fence, with concrete blocks1. I'd suggest you not permanently attach them as that would make the fence far too difficult to move around, but instead arrange things so they can be moved separately.

You might try a combination of both these things, with feet approximately the same as those in the photo but with weights added on top to make the design more bottom-heavy.

(1) At the most simple you could use existing concrete building blocks but if you want to make something that fits the supports of your fence you could cast your own blocks to neatly straddle the "feet" using a form. This form can be a simple plywood box, well lubricated or covered in plastic. A full guide to doing this is beyond the scope of this SE but there are now many guides online to casting concrete at home. Just as a design suggestion, I think you'd want to cast in a piece of bent rebar on the top or on one or both sides to act as a handle.

If you go ahead with casting a better system would probably be to have the posts of the fence simply sit into hollows formed in cast concrete blocks, so the fence would stand much the same as when it's set into the ground conventionally.

Don't try to guess how much wind will force your fence and how wide feet would be needed and how much weights adds to the equation.
Instead figure out a way (construction) to adapt (change) the feet (and weights) to what you observe (learn).

Not the answer you're looking for? Browse other questions tagged fence or ask your own question.

9
How can you safely operate a router table without a fence?
7
Do I need to seal the ends of hardwood fence boards?
3
Cheap table saw fence techniques
3
Adding height to wooden fence post
4
What are the holes in a circular saw rip fence intended for
0
What is attached to this rip fence?
1
Broken Fence Post Fix?