Choosing a saber saw for long blades (12" and 18"). What does the maximum length specified in a saw depend on?

I need that length to cut some very high density foam and cork (the foam is also similar in hardness to cork yoga blocks). But I can't see any saber saw that reaches that length in their maximum -I'm looking for the specifications for wood as they are always the longest they support.

Do I need a very special saber saw? Shall I keep looking for a higher maximum? Any suggestion about models or where to find it?

Your eBay link is to a WILPU RWM 225 which their website calls a "reciprocating saw" blade. Based on their video on the 225 blade, this is for a tool that we (in the US, at least) would call a "Sawzall" (even if not made by Milwaukee) and looks like this:

If you click the "Sawzall" link (above), you'll see that depth of cut isn't mentioned in the specifications. This is because it's an open ended cutting tool, and the only limit to the depth of cut is the length of the blade. The Milwaukee site does indicate a 1 1/8" cutting stroke, but that won't limit how long a blade it can push.

For your purposes, just about any "sawzall" (using the brand name as a generic term for reciprocating saw), will do the job to cut through your foam and cork. As an example, I've used my 18-volt battery powered "sawzall" (manufactured by a company who painted it yellow and black) with a 12 inch pruning blade similar to this:

I've used it to cut limbs from downed trees, and to cut down dead trees in the yard. I've also used it (with appropriate blades) for demolition work and other general purpose, non-precision cutting. Probably not the most powerful tool made, most likely has less oomph than a corded tool would, but cuts like a champ until the battery dies. The good news is that I have several batteries, so I just plug in a freshly charged one and put the dead one on the charger.

Most likely, the biggest issue you'll have is getting your cuts to come out accurately with a tool like this.

If you really mean a saber saw (or jig saw), which looks like this: 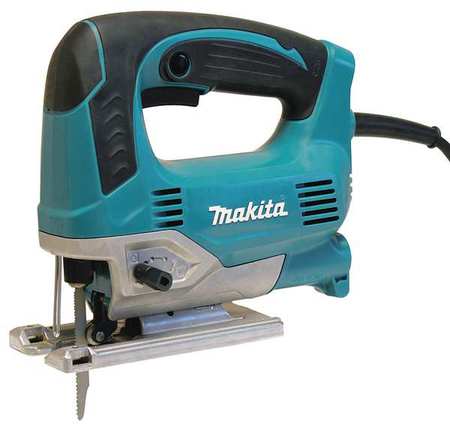 Then you would need something from WILPU* that is on this page of their site.

The advantage of the jig saw is that you'll get much better control over your cut, giving you a much more accurate cut. Also, jig saw blades are usually much narrower than the narrowest "Sawzall" blade, and will make much tighter curves. The drawback, is that I've never seen a jig/saber-saw blade that was 300-450mm long. This doesn't mean they don't exist, I've just never seen one (WILPU's catalog shows their longest jigsaw blade looks like it's 155mm - less than 1/2 what you need).

If you need the depth of cut, I'd suggest using the "Sawzall" blades you've linked with just about any reciprocating saw out there (caveat: you, generally, get what you pay for). I'd suggest cutting wide of your line, then sanding to bring it your final dimensions. (If you have plenty of spare material and time, you can practice cutting right to your line to learn the tool and get better control)

Based on some of the comments on your question, you could try a hot-knife. You indicated that you'd tried a couple and found that they were either too short or didn't work well. A quick Google found these instructions (among others) at Instructables.com for a DIY hot knife foam cutter. The advantage of this is that you can make it as big as you need it. It also looks to have a variable power setting and quite a number of tips from readers on improving it, so you should be able to ramp it up to cut your foam. It's also cheap enough that if it doesn't really work you're not out that much cash.

* No specific recommendation of WILPU blades (or Milwaukee reciprocating saws or Makita jig saws). I simply went with the brand you linked to and the first images I liked when I Googled for the tools mentioned.
Share
Improve this answer
edited Aug 25, 2016 at 18:14
answered Aug 24, 2016 at 19:25

Not the answer you're looking for? Browse other questions tagged tool-selection cutting saw-blade sabre-saw or ask your own question.