I have some very small squares that I am gluing for a checker board. Each square is .75 inch by .75 inch. I am gluing them by taking one square and the next, gluing and add another. But I am not clamping, just pressing them tight together. They have been holding good. I would clamp them but them they do a C motion and I do not have anyplace to plane them being so thin (.25 inch). What are good methods for gluing such small pieces?

It's not clear if you're glueing squares one at a time to each other and whether you will eventually glue to a backer board so some of the following may not apply.

Firstly two general points. You should be clamping if strength is important at the end of the day. The only common glue used by woodworkers that doesn't require any clamp pressure is epoxy.

Also note you're dealing with some end grain with these pieces and when you glue end grain it will inherently lead to weaker joints, most especially if it turns out that end grain will be bonded to end grain. But if you're alternating the grain direction from one piece to the next like this |–|–| there are no end-grain to end-grain joints to worry about.

What are good methods for gluing such small pieces?

It sounds like you're glueing the pieces one at a time to their neighbours to build up strips which will eventually be brought together to make up the checker board. If so it's not a good idea. In addition to being inefficient working that way small errors can build up and before you know it one row of eight is fractionally longer than another and your finished pattern is spoiled. Worse still, you can easily end up with a row that curves very slightly.

It would be much better, if possible, to glue all the squares in one operation using a slow-setting glue and this is the type of thing where a clamping rig comes into its own. This can be a temporary setup, something made up on the bench using dogs, the vice etc.

You can then apply pressure from all four sides at once, as well as from the top with a clamping board and cauls, or just very heavy weight placed on top (e.g. concrete blocks*) to keep everything flat.

There's a clamping board shown in a previous Answer here that shows how a simple clamping rig can be thrown together based on a sheet of plywood. In this case you'd tack or screw on four stops or fences, making sure that at least one corner is a perfect 90° angle. Wedges and packer strips if necessary bridge the gaps to the other two fences and apply the necessary clamping pressure side to side and top to bottom.

Now all that aside, there is this...

How it's usually done
The classic way to build up a chequerboard pattern means you are never dealing with individual squares or blocks at all. Instead, you glue up long strips of your alternate species into a panel which is then cross-cut into strips: 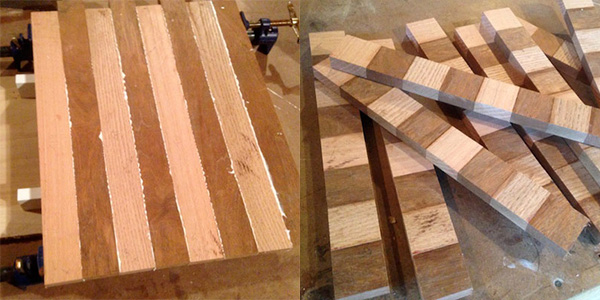 Every second strip if flipped end for end and then everything is finally glued up into the completed board pattern. Minor variations of this technique are shown here on Popular Mechanics, here on theFrankes.com and here on Intructables.

*Use wedges to edge glue thin boards on Fine Woodworking.

and I do not have anyplace to plane them being so thin (.25).

If you need to hand plane small, thin pieces you can make yourself a planing hook (a type of bench hook) with a low fence specifically for work of this nature. See What's a bench hook? and Planing thin stock without the aid of bench dogs for more.

Another option gleaned from old books was that used for creating thin wedges for use in joint work. You chisel a small recess (in effect, a short stopped dado) into a surface in which the workpiece can be set so that some of it projects, it can then be planed. In the old days this sort of thing would often be chiselled directly into the top of the bench, but again you can throw together a quick bench hook for this purpose instead so that you haven't created a permanent divot in the top of your workbench :-)

Normally, anything tiled is built on top of a backing board or a base of some kind and the tiles are glued to the backing board, not to each other.

If, for some reason, you want to just glue tiles together with no support, then one technique is to not apply the glue to the pieces directly. Instead, roll the glue out on a plastic surface, like an acrylic panel, using a brayer. Then, touch the edge of the tile to the surface. This will put a very clean, consistent layer of glue on the tile. As always when gluing, it is better to put two thin layers of glue on both sides, rather one thick layer on one side.

Not the answer you're looking for? Browse other questions tagged wood glue or ask your own question.

16
Planing thin stock without the aid of bench dogs
17
What's a bench hook?

3
Table top popping up
4
Edge joint failure - what is the cause?
1
How do I stop cracking noises from my pergola?
5
Glue-up for butcher block-style countertop
0
How Do I Glue Multiple Small Pieces Of Curved Wood Together Without Clamps
1
How to restore small whiskey barrel?
0
Gluing veneered panels together to make a box
0
Natural pine wood bed has strong chemical odor, why is this and how to stop it?