Finishing a desk or tabletop?

I am wanting to make my own computer desk and I am not sure in the steps I need to take to finish it in regards to oiling and applying something like polyurethane which seems to be used in all the YouTube tutorials (it's a bit harder to find in the UK).

I am thinking of using Danish Oil or a Walnut Satin Varnish. The surface is going to be used for work, eating and drinking. Would I need to apply polyurethane or another layer after applying either the oil or the varnish. Will the oil affect the colour of the wood too?

OK need to run though a number of basics first.

Firstly a general caution, lots of people who posts simple guides on YouTube and elsewhere are somewhat confused or muddled in what they do in finishing. It is a complex and sometimes confusing subject but a lot of it is simply people repeating steps they saw or read elsewhere without thinking about what it is they're actually doing. And in case it needs to be said, sometime you will see advice that's outright wrong1.

Now about what you're planning on using.

You don't need to oil and varnish. You can choose to deliberately for one or two reasons, but you can do just one or the other if you want to simplify things, reduce the number of products you need to buy and slightly speed up the process.

For a computer desk I would personally go with varnish myself as it's the toughest of the alternatives you're considering (a bit more on this below) and perhaps just as importantly for you, it can be just as easy to apply as anything else.

(its a bit harder to find in the UK)

Polyurethane, or poly for short, isn't harder to buy in the UK than it is in the US, it's just harder to identify. Any varnish you buy could be (might even be likely to be) polyurethane already, it's just that we name some of our products differently.

If you buy a varnish and it happens not to be a polyurethane it will be one of only a few variants and all of them are suitable to use as a final finish in their own right so no need to worry about this too much. In general if a varnish plugs that it is scratch-resistant then that's all you really need to know for certain application such as your computer desk.

Would I need to apply polyeurethane or another layer after applying either the oil or the varnish.

Here's one of the classic things that gets muddied online, you don't need to polyurethane after varnishing because polyurethane is varnish.

Poly is just one particular type of varnish, although some purists like to classify it separately they're wrong to do so as 'varnish' was never one thing, as long as there have been commercial varnishes sold there have been different versions available with various strengths and weaknesses. Polyurethane is just one more in a long line of varnish innovations going back hundreds of years.

As for "Danish oil", despite the name it is not actually an oil. More accurately it's classed as an 'oil finish' but even that is a bit of a misnomer, because although it largely consists of oil it is in reality a blend of oil and varnish (with some or a lot of additional white spirit). This is one of the main reasons I'm not a fan of the commercial product — it's so easy to make your own. On top of that it'll be much cheaper while also giving you the freedom to vary the ingredients as you prefer.

will the oil affect the colour of the wood too?

Oil will in general affect the colour the most, deepening the tone and imparting some yellow-orange or amber colouration. Oil also increases contrast the most, magnifying grain patterns or figuring in the wood, which is why it is sometimes deliberately used in combination with varnish, to enhance the grain (called "popping the grain") prior to the final finish going on.

Varnish will generally affect the colour just one step down from pure oil (note: this refers to oil-based varnish only).

As "Danish oil" is somewhere between oil and varnish it affects colour approximately in the middle, generally more like oil and less like varnish though.

Obviously this assumes an uncoloured varnish or "Danish oil" product, there are of course many coloured versions available which will make the wood redder, browner or whatever.

I am thinking of using Danish Oil or a Walnut Satin Varnish. The surface is going to be used for work, eating and drinking.

Either one of those is suitable for your requirements here if applied correctly, the main thing being that enough coats are used.

If you want maximum protection from hot mugs, spilled liquids, scuffs and scratches, go with varnish as this builds up a coating on the wood (varnish is a film finish not a penetrating finish, because it builds an actual film on the surface).

To ease application and ensure good results I would recommend thinning the varnish to turn it into what's called wiping varnish, then wipe it on with a rag. Note: the rags should be spread out flat to dry otherwise they pose a fire hazard.

[1] You'll find unnecessary steps promoted as a must-do-every-time (my favourite of which is sanding between coats of varnish to guarantee adhesion, because this is nonsense) and occasionally important steps are omitted. Anyone wishing to learn finishing would be much better served by reading a number of modern finishing books and comparing notes between them instead of relying on random guides from YouTube of unknown quality.

I am bit of a Danish oil bigot. It's been so good to me that I have trouble saying anything bad about it. Realize that you will get a matte surface.

About forty years ago, I made a table, which after sanding to my heart's content (trust me, my heart is readily contented when it comes to sanding), I finished it with three or four coats of Danish oil, even though the instructions say to apply liberally once, then wipe off the excess.

For applying repeated coatings, each of which takes very little additional oil, I used fine wet/dry sandpaper (emery cloth 300 or 400 or even higher grit).

The finished surface is not subject to rings from moisture and easily wipes clean.

If the surface should get scratched, it can easily be sanded out and a new coat of oil applied. (Or you can skip the sanding.) As a matter of fact, every 10 to 15 years, I have refinished the table top - this consists of removing clutter from the top, cleaning any obviously soiled places, giving it a quick once over with fine sandpaper (180 - 220 grit), then applying a coat of oil using a fine wet/dry sand paper as in the original finishing. Good as new once it's had a chance to dry. If there is any residual oil or sanding crud, just wipe it off with a rag.

This is what I do. When you have the desk finished I sand it no higher than 220. then I apply the stain of choice for the color. Once that is all dry I would recommend using polyurethane. apply at least 2-3 coats. This will help protect the wood from getting damaged. I am not sure if the oil will color the wood. I would think if the oil has a color to it, then the wood will have the same color as well. I am hoping this helps a little.

Update: I did a little research for you for alternatives to polyurethane. Go to the website to read up on them but there is "Tung oil, Linseed oil, Eco House Hardwood floor oil, Candelilla wax, bio paints, and AFM Safecoat" From that I would get is either the wax or the safecoat. The others are oils and I do not see how they can protect wood, but I never used oil. http://greenlivingideas.com/2014/07/28/5-nontoxic-alternatives-polyurethane/

Not an expert, but I made a desk recently and decided to finish it by spraying acid catalysed lacquer (AKA conversion varnish). It was a bit of effort to find a spray gun and learn how to use it, as well as finding a source for the finishing products, but the result was really good. benefits of acid catalysed lacquer: 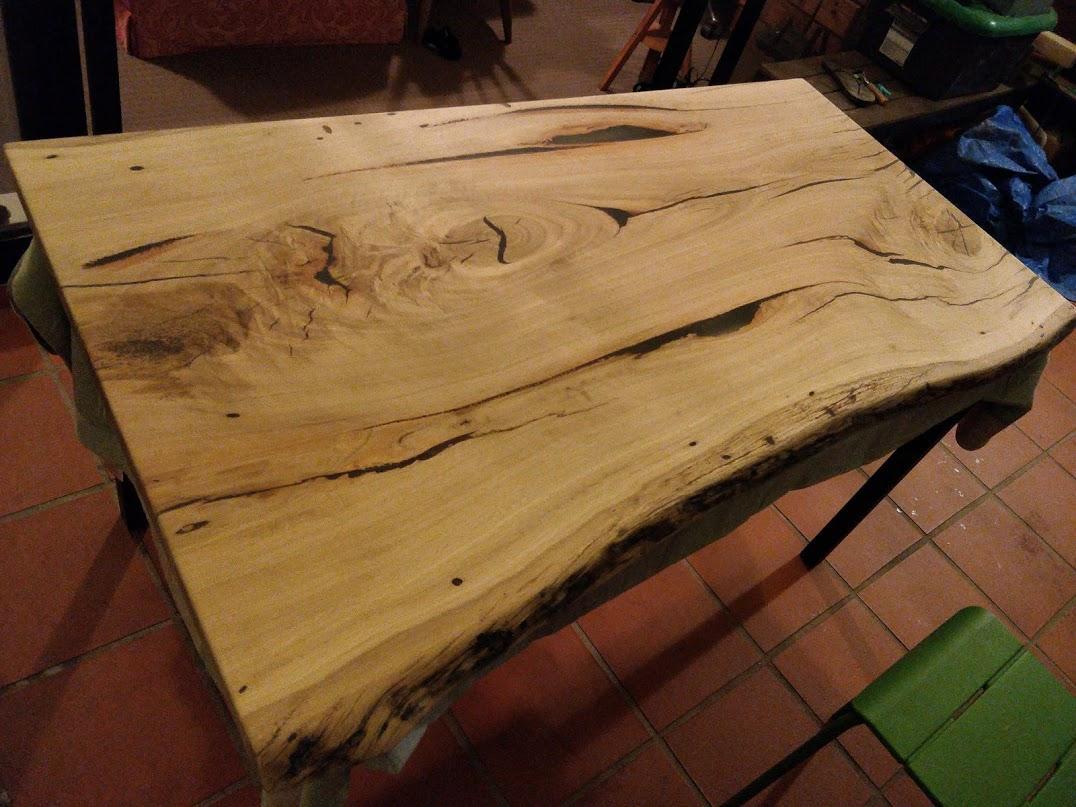 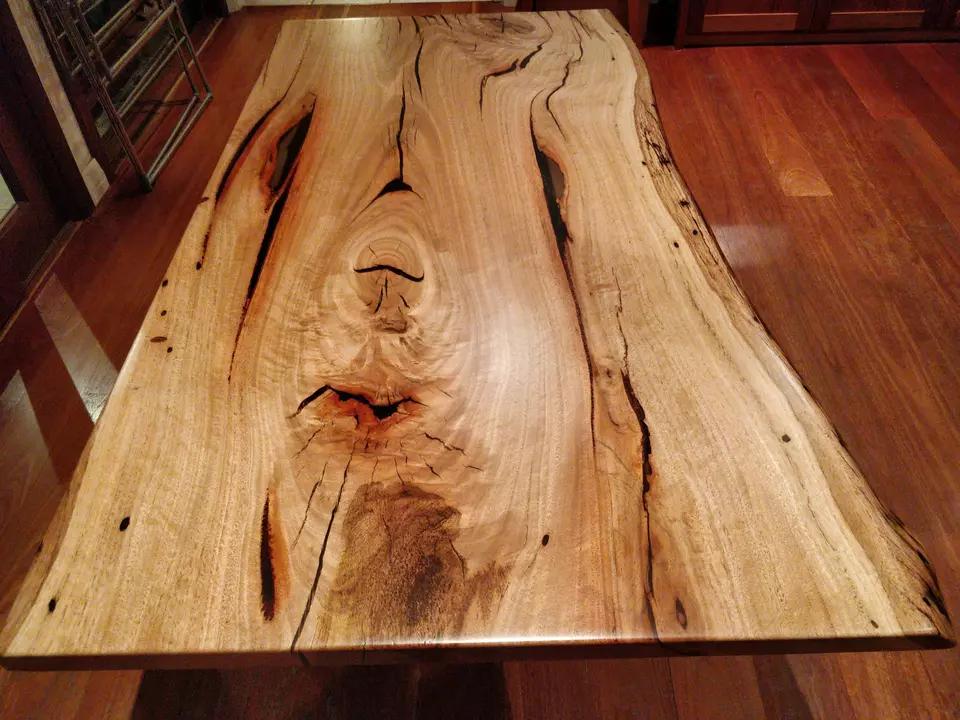 Not the answer you're looking for? Browse other questions tagged finishing wood varnish or ask your own question.

6
Protecting against water damage
3
Why is clear epoxy not often used to fill cracks in live edge slabs?
1
To Resin or Not To Resin (Cracked Gum Wood)

38
What's the purpose of raising the grain before finishing a furniture piece?
12
Evening reflectivity of a finish after "finishing the finish"
13
Leveling a finish/finishing the finish
15
Finishing schedule for live edge walnut slab
10
Finish raised the "grain"?
5
Should I keep cherry in the sun before finishing?
1
Finishing/Buffing/Polishing Redwood Slab with Oil-based Varnish thinned with Danish Oil
4
Finishing a beech desk top (Ikea Gerton), suitability of tung oil
1
Varnish rubbing off on my desk
2
How to obtain protective yet close to the wood satin finish on desktop?