Weight bearing for a loftbed and wood only joints

I'm planning on making a loft bed, and I now got a plan and I'm working on the details. 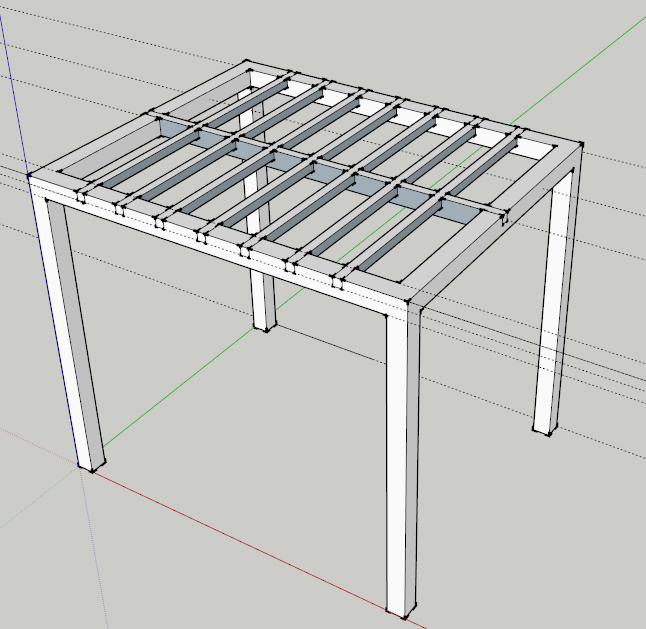 The measurements I'm going for is 1700(start of the top beam)x1700x2100mm. The main beams are 98x98mm, middle beam 98x48mm and the crossbeams are 48x48mm. I will probably use pine for the beams and spruce for the rest to save some money. What I'm wondering is if this will hold the weight that gets on a double bed. I looked at this and some other, but they where all single beds and as i understand 98x98mm should hold a single bed just fine. Will these plans hold a double bed and does anyone know of a ballpark of how much weight it can hold?

So next question, I must say I've fallen in love with the thought of just using wood for the joints, no glue or screws. So I looked about and wonder if a 3-way Miter joint will hold? I understand it will be much stronger if I use glue and reinforce with screws. I will also add a desk and shelves to the bed, but before I get ahead of myself I wanted to know if my main plan would work. I mention the desk since it opens up for the possibility to add support crossbeams on the legs if that should be needed.

I see three inherent weaknesses, two of which critically compromise the strength of the bed. I'd suggest looking at commercially-produced solid wood bed frames for some design ideas (don't look at cheap futons, etc.). 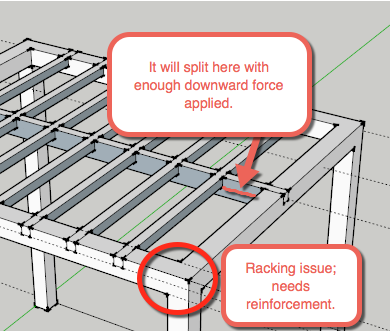 The support beam running down the middle is inherently weak at the ends because the top half transfers the load to the outer frame, but the top has notches cut into it. You want a single contiguous piece from end to end for maximum load-bearing capacity. This weakness is not present in the other question you linked. You may be able to somewhat address it by using a box spring or sheet of plywood across the top, but if the mattress is going to lie directly on this frame, I'd be concerned about that center beam.

Similar to the other question, your design's legs appear to be very long but they don't have anything to reinforce them against racking. You may want to consider using wider but thinner lumber, as opposed to more square lumber for the outer frame. Although you will still want some additional reinforcement against racking with such long legs, a wider board will give you a longer and stronger joint between the legs and the frame. It will also be more resistant to deflection than a square beam if you orient it with its narrower edges facing up and down, and it will make your design stronger since you won't have to cut halfway through them in order to accommodate the cross bars in your design.

The third weakness involves all those cuts into the load-bearing parts. Some might argue that they are not very visually appealing, either, but that judgement is up to you or whoever will be using this bed. Instead of making those cuts in the outer frame, consider installing cleats to bear the load without compromising the strength of the frame.

Rob's concerns are important. When you calculate the load that the main beams will carry you must ignore the depth of the notches and calculate the sag/load based only on the depth of the continuous wood below the notches. I would also caution you regarding the use of the 3-way miter. This is not a joint for beginners. It will need to be tight, so unless you have been at this for a while, experiment first for practice and to evaluate the joint's strength. Rob also point out that this joint must resist racking forces. The constant lateral loads on the joint will encourage movement and a softwood will give over time making the joint sloppier, which will increase the racking. In the link for the 3 miter joint you provided it shows that the joint is held in place by the three small square tenons that extend into mortises in the intersection pieces. These pins are all that is used to resist the racking forces. I am not sure this joint is up to the task using softwoods and I certainly would not use a joint like this at all unless it was glued.

18
How can I determine the load capacity of a simple bench?
6
Make a bunk bed v2
2
Best way to join frame members in a rectangle box using bolts?
3
Is there a better way to join these two boards for a platform bed?
1
Canopy bed frame design supporting a suspended adult?
1
What knock down hardware can I use on this platform bed frame?
2
Which weight bearing knockdown joints
0
Choosing wood for long 11'x2' (double) desk top
1
How to use Sagulator for Sofa / Bed?
2
Will the center have enough support for my custom desk/table?