Would it be strong enough if I was to add 1ft of fence post to a 5ft garden post using a box joint? I am looking at attaching a 6ft wooden gate to it on one side and a standard fence panel to the other side

A box joint might be strong enough but that's just a guess, the loads placed on the finished post will determine if it is or it isn't, along with how accurately it's cut of course.

Could be a bit difficult cutting a box joint in situ on a standing fence post accurately enough! Even if for that reason alone you may want to go for something simpler, like a scarf joint (glued and further strengthened by nailing, screws or through-bolts).

You could get away with a butt joint, suitably reinforced, if you don't mind the aesthetics. Even though this is an end-grain joint you should glue it, with structural adhesive or epoxy, but the reinforcing metal plates attached to the outside will provide most of the strength.

You may want to give some thought to whether it would be better to bite the bullet and take out the 5 foot post and replace it with a 6 foot post. Probably simpler and faster and it might work out cheaper at the end of the day, best of all there wouldn't be any worries about the strength of whatever lengthening method you chose otherwise.

Yes, I think a box-joint would provide sufficient strength, at least if you add the additional foot on top, and not on the bottom where there might be more leverage on the joint, but even there it would probably suffice.

I'd cut the fingers on the thin and long side, as most of the strength in the joint will come from the glue, and more, longer fingers will mean more gluing surface. 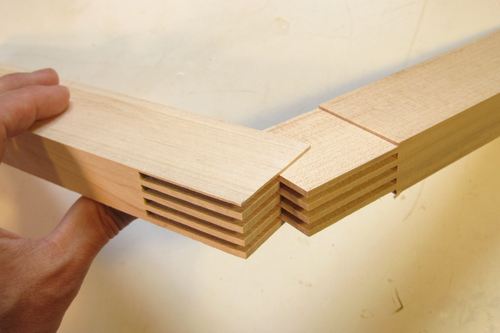 In addition to the box-joint I remembered a video that might proof some good food for thoughts by Mathias Wandel where he fixes a broken chair leg.

Not the answer you're looking for? Browse other questions tagged box-joint fence or ask your own question.

27
How can I join two boards at the ends?

3
Cheap table saw fence techniques
6
8 to 12 mm plywood box joints: brackets vs glue(box joint) vs screws
4
How do i create a really long box joint?
4
Freestanding Fence Post Support Size
3
Pocket Hole Joint Strength
1
Making a box joint jig
5
Box joints for this table with just jigsaw and chisel?
0
What is attached to this rip fence?
1
Broken Fence Post Fix?
1
Why do many router table fences have a 45 degree vertical edge at the router side?