Affixing a dowel to the bottom of a piece of board

I'm creating a desk from a file cabinet with a piece of wood atop it. I want to place a 1.25" dowel on the left side so that it is more stable, but I don't think running a screw through the top will suffice. 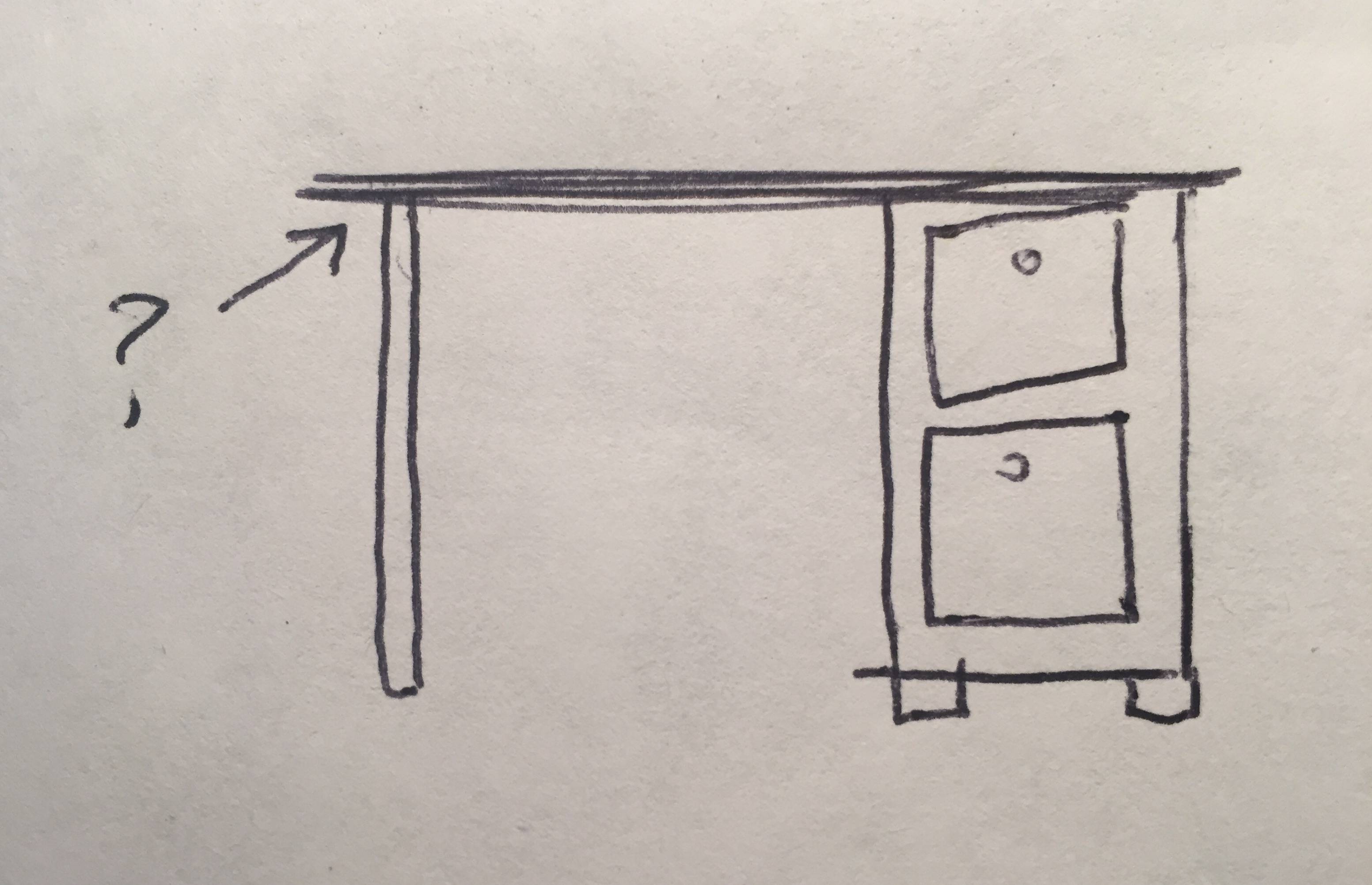 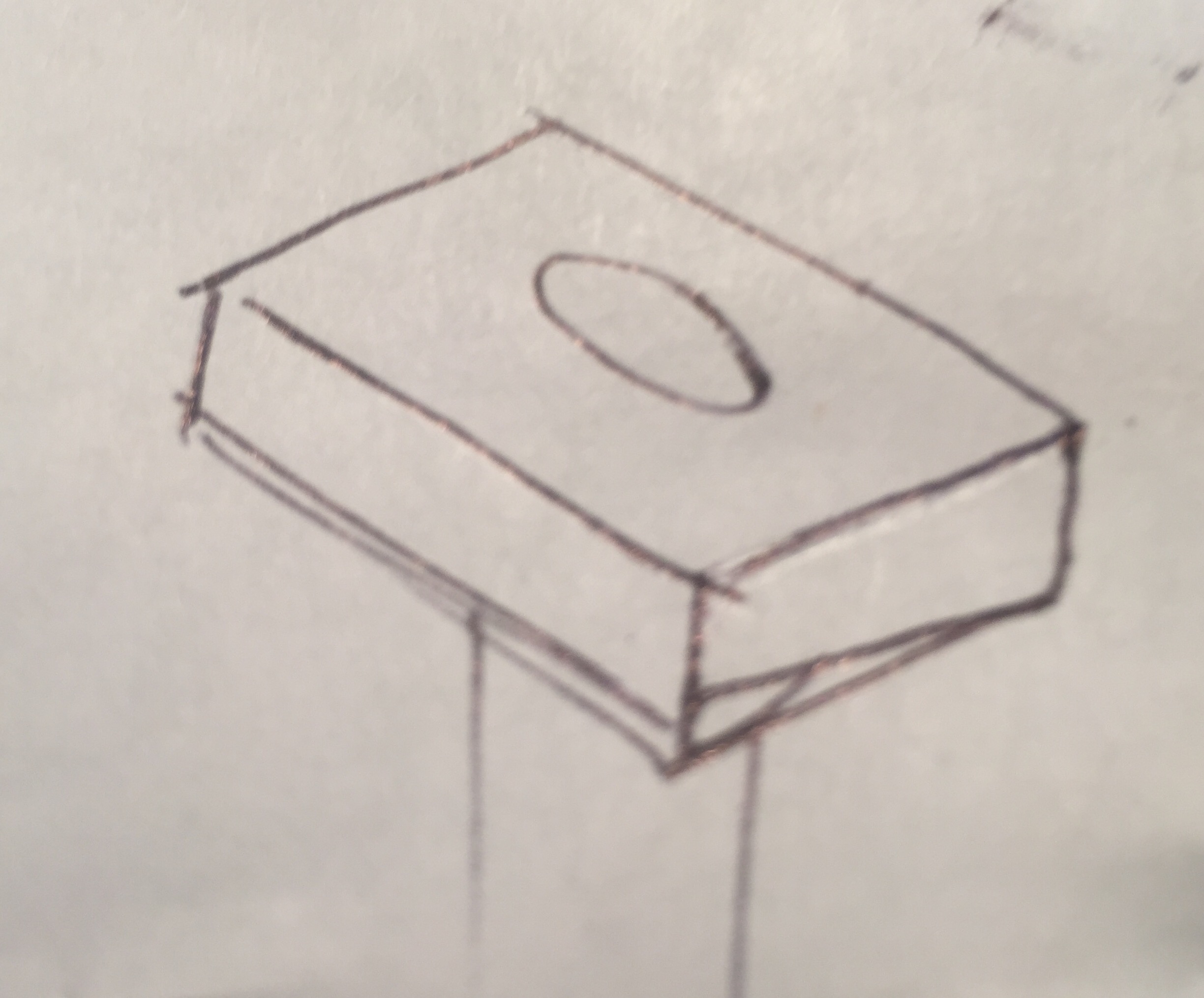 which I can glue to the board and then glue in the dowel???

The joint you are probably thinking of is a mortise and tenon joint. Such a joint is very strong, but strength is relative. If you have the top securely fastened to the file cabinet, and only need the dowel as a leg to keep it from tipping, a 1 1/4" dowel would have enough strength for that purpose, but fastening it to a relatively thin tabletop would be the weak link.

If the leg never had any lateral stress applied to it, and was always in compression between the tabletop and the floor, almost anything that held it in place would suffice. Unfortunately, you cannot assume that the leg will never get knocked or kicked, an so you need to provide some support to prevent lateral movement.

If you look at a table, the top is affixed to an apron consisting of boards perpendicular to the top, and the legs are fastened to this apron. The problem is, it is hard to attach a round dowel to a flat apron. Usually this is solved by having the leg be squared at the top allowing fasteners to connect to the apron in two dimensions. 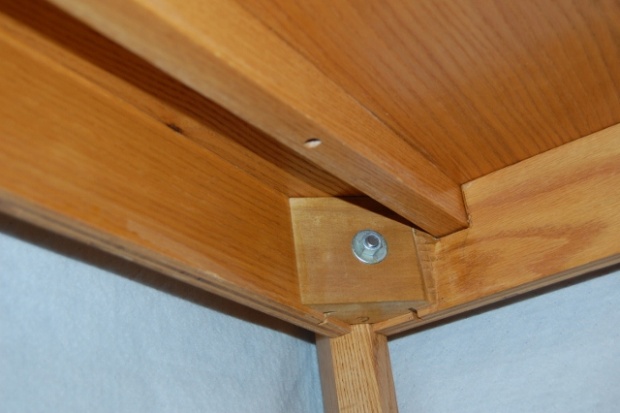 Instead of a dowel, you could buy a single table leg, then attach it to the desk bottom somewhat like this. 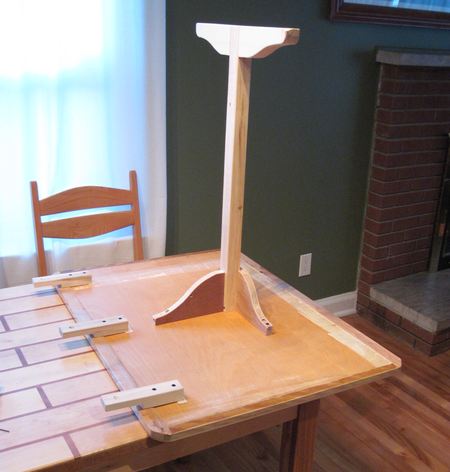 Using a simple table leg similar to this one below available at Home Depot. 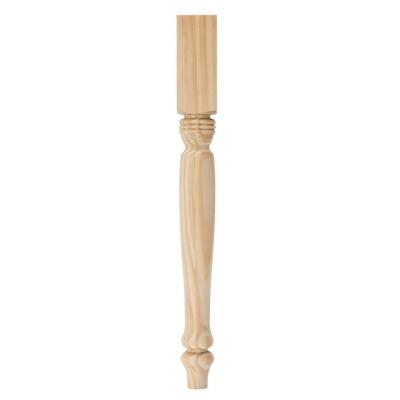 Don't use a dowel. A dowel will be both flimsy and will be warped.

Use one of those 4x4 beams that Home Depot sells for garden edging. Have them cut it to the right length. Make sure you have the length right to within 1/32nd of an inch. With tables you need SOLIDITY. That's what a 4x4 will provide.

You can probably use a 4x4 without even attaching it to the table, but to attach it use two angle brackets: 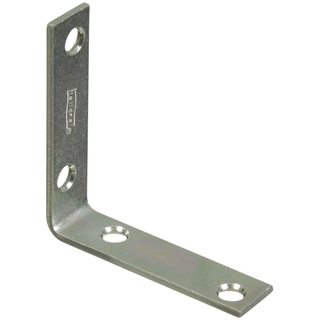 The angle brackets should be attached using wood screws. You will need a drill to make pilot holes for the screws.

Yes, you can do this the way you've proposed and actually I think it's a perfectly reasonable outside-the-box solution. What you'll end up with is not that different in principle to how some Mid Century Modern pieces have their round legs attached.

One caveat though, I do think you'd be better off using two dowels if you plan to lean on the table much when it's in use. A single dowel placed centrally will allow for a lot of twisting or warping of the top (far more than you'd guess, even if the top is very thick and stiff) so adding two legs would be much better.

If you're set on using just one leg mount it off-centre, toward the side you plan to sit at.

You'd need to make this but it's a simple enough operation, just requiring cutting the wood to size and drilling a suitable hole through it.

If this joint were described in woodworking guides I bet it would say that ideally you'd want to create a shoulder on the dowel (essentially forming a circular tenon on its end, the drilled hole in the block then becoming a round mortise) but given the way this will be mounted I think that's complete overkill. With a good tight fit* between the dowel and the drilled hole you'll get an excellent glue join, and once the block is firmly attached to the tabletop from underneath the leg isn't going anywhere.

which I can glue to the board

Don't glue the board to the tabletop, use screws at each corner instead. Pre-drill and countersink as needed, see previous Answer for details if required.

You didn't specify the wood type here, but I would recommend you go with a hardwood rather than a softwood especially if you go with just one leg.

In either case it's a good idea to select a dowel with straight grain and minimal runout (grain should be parallel to the sides, not at an angle) to be as stable as possible, but this is most critical if you go with softwood. And avoid picking a piece that has a knot in it.

*Go for a tight fit but in practice you might not find this possible, as the dowel may be a fraction smaller than the available bit despite them being nominally the same diameter. If this does occur use epoxy to glue the pieces together, almost all regular wood glues (including all PVA types and most polyurethanes) have very poor gap-filling properties.

Not the answer you're looking for? Browse other questions tagged joinery dowel or ask your own question.

9
Are there specific types of screws I should use for woodworking?

9
What's the best joint when exposing to weather (specifically for a beehive box)
5
How do I prevent the rungs of my loft bed from moving slightly in their join with the legs?
7
How to join short boards to make a longer panel
3
Best way to join pieces of L shaped desktop
3
Wide breadboard tenon length?
2
Fixing mistake: Filling the gap in a breadboard end on tabletop
3
Laminating Boards For loft Leg
3
Is wood-glue enough or should I use extra support?
1
Solid wood top to solid wood sides
0
Butt joints on both sides on the same piece of wood