My American Ninja Warrior watching daughter has asked me to build her a Brachiation Ladder (fancy name for overhead ladder or monkey bars). Here's an example: 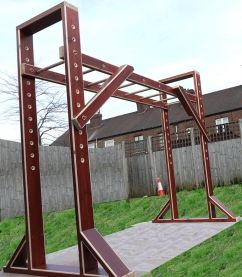 The interesting part is that she doesn't want it to be the normal 6 to 8 feet wide. She would like it to be 12 feet wide. The vertical supports are easy, but I'm not sure what dimensions I need for the two horizontal beams that form the ladder. The constraints are:

For a 12' span backyard monkey bar set I'd use four clear (no knots) 2x8's - two each side. Use threaded pipe flanges screwed to the inner (hidden) face of the inner 2x8's (in a counterbore) to anchor pipe sections. Assemble inner 2x8s and pipe, then laminate the outer 2x8's onto the inner ones.

Yes, that will be heavy, but not beyond the limit for two adults to move around, and reliable for more than the projected loads.

To get nitty-gritty about load calculations, please check out this handy calculator - it should provide you a good approximation of scaling for the lumber. You will have a 'live load.'

Under the assumption that you will use some kind of design resembling the picture you posted, especially the diagonal braces on the ends, I would use two 2x6 for each side rail.

Capable of supporting a 50-75 lb child swinging in the middle (6 feet from either end). And possibly multiple kids if the neighbors invade the backyard.

I think the lumber will lose most of it's stability with the holes that are drilled for the steps/rungs. To compensate for that I would drill all the way through one 2x6 and glue a second one to it. This has the added advantage that you could clamp the two rails with the holes together while drilling, ensuring the holes to be nicely aligned.

One other crucial part regarding the stability is the selection of your lumber. Be sure to avoid posts with as little knots (if any) as possible, they are predetermined breaking points.

Douglas Fir since this will be outside in the midwest

We had a bench built with untreated Douglas Fir and after 4 years it splintered all over the place. I heard them say this was because it was "untreated". Something you might want to consider when building something for children.

Not excessively over engineered so I can still move it around if necessary. For example, if I don't need to use 2" x 12" boards, then I won't.

I don't see a way to avoid the long boards, but all in all I think two moderately strong people should be able to at least carry it around the backyard a bit. The ladder in your picture looks as it could be disassembled fairly easy, which probably would add to the task of engineering it though :)

Another thing to consider is, if it's easy to move, it's also lightweight and prune to tip/collapse. A couple children playing with it might tip it over and hurt themselves if the thing is too flimsy.

My grandfather built something alike for us and we kept messing around on/under/with it way longer than he anticipated. It basically had to hold the equivalent of 3 fully grown men in the end :). So you might want to consider dimensioning the thing to hold 200 lb (~90 kg) in the middle.

Out of curiosity, what are you planning on using for the steps/rungs? I'd go with quarter or half inch pipes I think.

Not the answer you're looking for? Browse other questions tagged lumber strength outdoor douglas-fir or ask your own question.

11
When building an outdoor structure, should I use pressure-treated lumber or something like cedar?
19
How do I shop for lumber to use in home wood working projects?
6
How do you remove bed bugs from lumber?
12
Is dimensional lumber kiln-dried differently than a kiln-dried board meant for woodworking?
4
Given final dimensions in mm, how do I choose what dimensional lumber (in customary units) to buy?
4
Actual KVH sleepers dimensions
1
Lumber Calculator
0
Monkey Bar / Play structure design question