I got a tiny (almost "toy") lathe, for turning wood. The problem is the chisel I got with it was totally a toy; total crap made of some bendy, soft iron I ruined on the first try. The lathe, tiny as it is, is quite neat, but I really need a better tool.

I looked up turning chisels, and they are expensive (and I'm short on cash after the lathe purchase). I happen to have a neat set of small sculptor chisels though, and I wonder if I can use them instead. I'd just try but I'm afraid I'm going to ruin the nice chisels too.

The length/leverage should not be a problem - the lathe being so tiny, the rest for the chisel comes really close to the material.

The following may read like I am trying to talk you out of the idea but I'm not, just hoping to help you go into it with realistic expectations.

Yes, although I think you'd very quickly want to use some purpose-made turning tools if you start to do much turning, you can definitely use tools not designed for turning (see bottom point).

There are two main issues I think, number one being safety (primarily, securely holding on to the chisel during use) and edge wear.

Safety
Even with a very small lathe the levering force from fast-spinning wood shouldn't be underestimated, particularly if a tip digs in which happens to nearly everyone at some point the potential for the tool to be snatched from the hand is greater than you're probably thinking.

See this Answer for a little on turning safety: What do I need to know for basic lathe safety?

There's also the issue of the toll on the tool itself, edge failure (not merely blunting which I cover next, but chipping), possible bending of the blade lower down near the handle and last but not least a crack forming in the handle (even with a tight-fitting ferrule in place).

Edge wear
Almost every carving chisel will be a type of high-carbon steel, which will wear much more quickly than HSS, now regarded as the minimum standard for the metal for a turning tool. The harder and tougher the wood the more you'll need to sharpen, and without exaggeration this might mean you need to stop to re-sharpen every couple of minutes.

However, historically we had no HSS or carbide-tipped tools of course. Until very recently all turning was done using some kind of high-carbon steel, so there's no technical reason it can't be done, it's just that you will need to sharpen much more frequently.

Related to this, edge geometry — because of the stress on the edge, even when using much stronger steels it's common for turning tools to be sharpened to a much steeper bevel angle than you'd use on carving or bench chisels. Gouges for example can have a 70° outcannel bevel, not the 25-30° more common on a carving gouge, so once converted the tools will require a lot of work (i.e. a lot of metal will need to be ground off) to change them back to the kind of geometry that's better for carving. So you can't really expect the same tools to do double duty I'm afraid, broadly speaking it's one or the other and not both.

As I say above, despite how it may come across I don't want to dissuade you from trying this. After all many people have made their own turning tools from screwdrivers (mainly scrapers and parting tools) and usually without further hardening the tip and that is saying something as screwdriver tips are deliberately not made as hard as the steel can get. 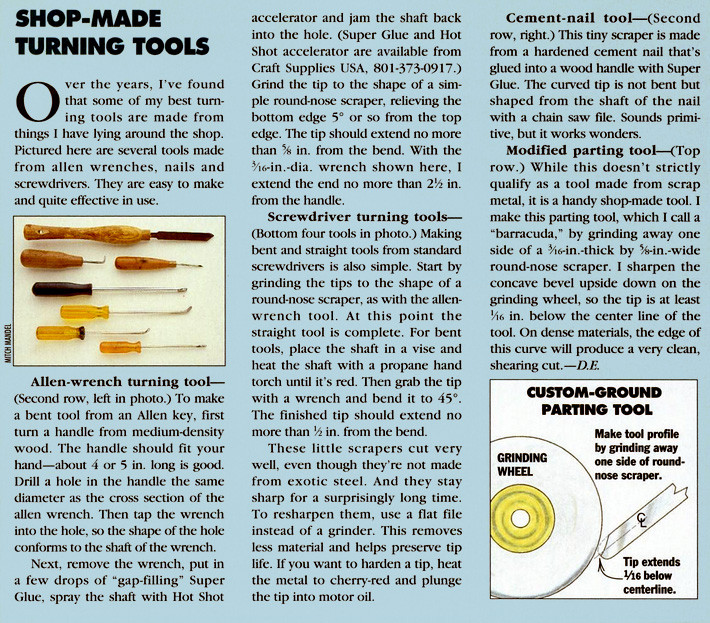 For extra penny-pinching points, assuming it's not too late, don't throw away the crappy tool you got with the lathe. Despite how bendy it was it may still be made of tool steel, just not hardened properly. If that is so you can harden it yourself fairly easily at some point in the future.

For very basic heat treatment the equipment needed is modest — a small gas torch and a metal container of oil for quenching, nothing more. You can then temper the steel using the torch, or for a little extra control by heating and cooling in a domestic oven.

This may also prove useful: How can I tell if wood turning (lathe) chisels are sharp? Sharp turning tools are very important, as is always the case with edge tools when sharp they give a better surface and are safer in use.

I personally wouldn't try - most sculpting chisels are relatively small, whereas for lathe work you want a reasonable length to maximise leverage. (eg so you can safely/easily hold the chisel)

I also suspect the handle on the sculpting chisel would not be strong enough to withstand the lateral force from the lathe. (Normally they take a vertical force ie from a hammer, or from a hand)

Not the answer you're looking for? Browse other questions tagged tool-selection turning chisel or ask your own question.

10
What do I need to know for basic lathe safety?
5
How can I tell if wood turning (lathe) chisels are sharp?
4
Recommended tools for a lathe
4
Fixing an oversized mortise

8
Does it matter what type of mallet I use with my chisels?
5
How do you use a 2D template with a lathe?
3
What type of lathe do I need for duplicating parts
7
How heavy a piece of wood can my lathe handle?
5
Lathe Semi-Automation
3
Where to get end caps for chisels or what to use instead?
4
Recommended tools for a lathe
5
Is the "paper test" actually relevant to sharpening chisels and planes?
3
How are these toolmarks happening, and how to prevent / get rid of them?