I bought 320 grit sandpaper the other day and only noticed now that it's a different kind, labelled 'water' instead of 'cabinet' sandpaper. 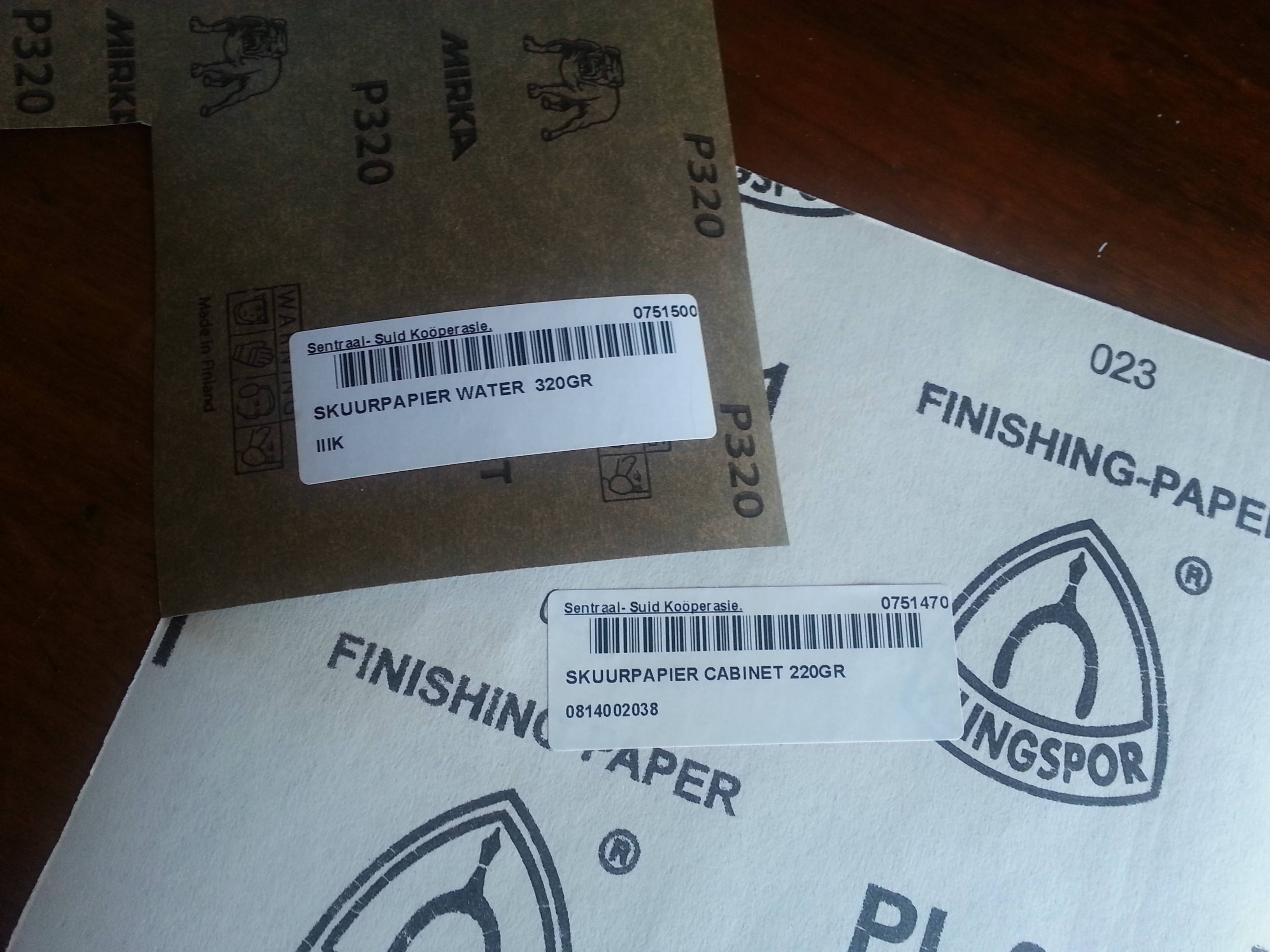 On the terminology first, "water sandpaper" is not the commonly used name for this type of paper. It's generally referred to as wet-and-dry, wet-n-dry or wet-or-dry paper (with or without the hyphens) as well as wet/dry paper.

And note that 'sandpaper' is especially a misnomer here since this type of paper isn't, and has never been, made from sand. The most common abrasive used for paper like this is silicon carbide (sometimes shortened to SiC, so the paper may be referred to as "SiC paper"). Usually when someone says SiC paper they mean wet-and-dry paper1. Also, since the abrasive is a dark grey or black in colour they'll sometimes be referred to by colour2. And as if that's not enough, some older guides will refer to the paper as carborundum paper, since SiC is also sold originally as carborundum.

In general, not for sanding wood. It can of course sand wood and it'll do it well, since the abrasive is sharp and very hard, but some finishing gurus say that it shouldn't be used for sanding wood because of its dark colour, which can be obvious on certain lighter-coloured woods if any abrasive particles get stuck in pores or grain and can't easily be removed when you're done sanding.

There are a few previous Questions here that cover how this type of paper is commonly used in woodworking:
Leveling a finish/finishing the finish
How do I de-nib polyurethane after it dries but still maintain its finish?
How do I achieve a "piano black" high gloss finish on wood?

Final quick note, it's important to bear the following in mind when reading American woodworking and finishing guides when using P-rated papers.

P-rated paper
There are two main classification systems used for abrasive paper, CAMI and FEPA. CAMI is the American system which uses a plain number, FEPA is from Europe and has the P before the number.

P-rated papers generally produce a slightly more uniform scratch pattern (fewer scratches that are deeper than expected) because the abrasive grit is more accurately screened, so there can be a much narrower range of grits bound to the paper than on a CAMI paper. Obviously good results are possible with papers classified either way, but in general it's more feasible to skip grits when sanding using P-rated papers.

While the two systems share most of the same numbers they don't unfortunately correlate across the whole span of grits :-( Within the narrow band of grits used most commonly in woodworking they are roughly equivalent, so 220 and P220 are nearly the same, but once you get to higher numbers (finer grits) they begin to diverge and for example 600 grit paper is actually nearly equivalent to P1200! 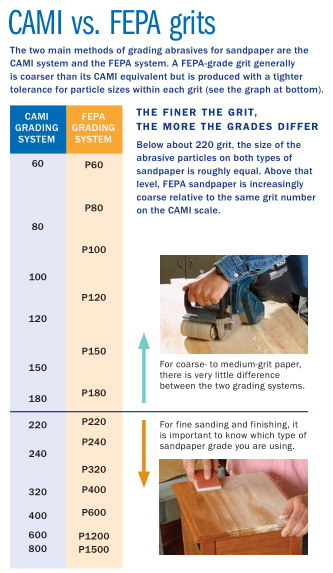 1 It's possible that all abrasive papers or cloths that use silicon carbide can be used wet, so regardless of the name used it may always refer to a waterproof abrasive even when that is not specified.

2 Not all grey papers use silicon carbide however. Light-grey papers, usually fine to very fine, are sold for smoothing/flattening finish and these are made from aluminium oxide (more commonly seen in abrasives in its red form, as used on most sanding belts and sheets for powered sanders of all types).

Water sandpaper is used for "wet sanding" - typically on one of the last steps of finishing to reduce/remove brush marks and or trapped particles left on a previous coat. It usually has more consistently-sized abrasive bits which are adhered better to the backing.
This type of paper can be used both dry and wet - normally using a light solution of water and a couple of drops of liquid detergent. http://www.woodmagazine.com/materials-guide/sanding/wet-sanding

Water on the label implies that it is a wet/dry sandpaper meaning that it can be used when wet because the glue matrix which holds the abrasive is not water soluble. For most woodwork applications this is irrelevant since the surfaces are sanded dry. For other applications such as sanding metals etc. water is often used to help lubricate and remove debris which otherwise would clog the grit in the paper shortening its useful life. Otherwise, there is no appreciable difference in the abrasive qualities/performance of the paper. I keep some on hand for unique sanding conditions such as for stone inset in wood project or for when sanding items such as the soles of a plane I am reconditioning. I adhere the sandpaper to a marble tile using water as an adhesive and then sand the sole on this sanding platform to flatten the sole. I am sure many have found other uses as well.

28
How do I achieve a “piano black” high gloss finish on wood?
9
How do I de-nib polyurethane after it dries but still maintain its finish?
9
Is all fine grit count sandpaper called wet/dry?
12
Leveling a finish/finishing the finish