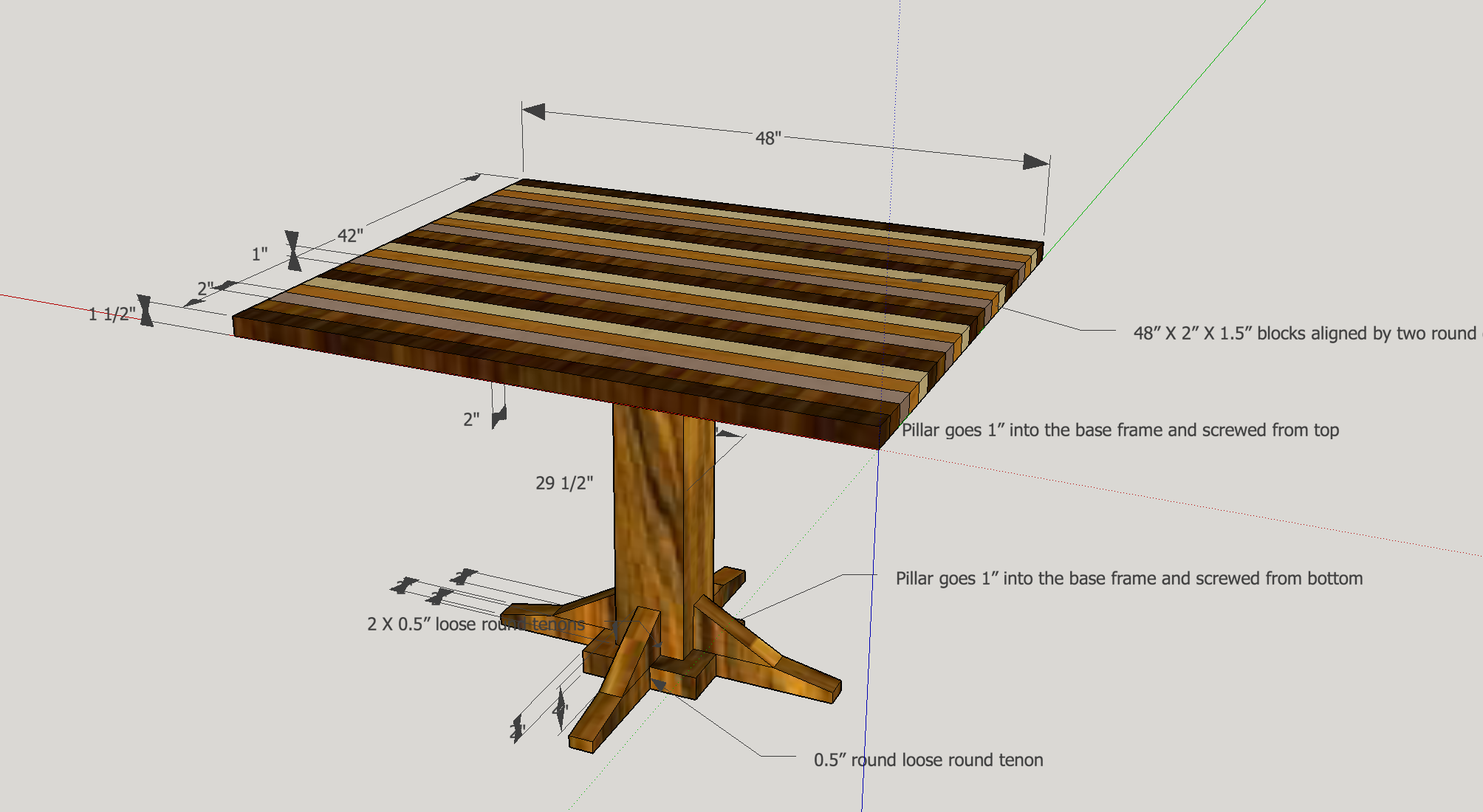 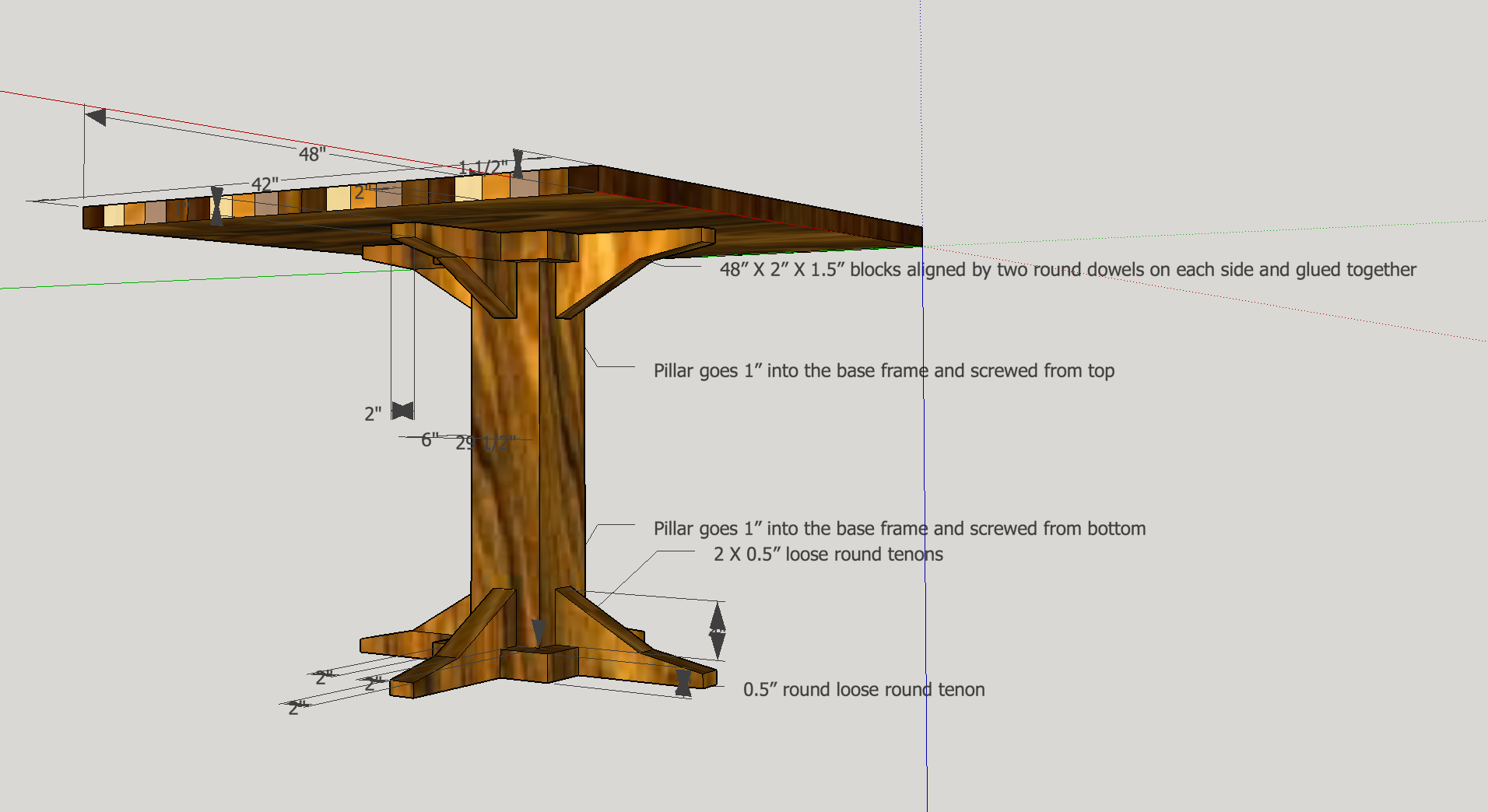 I found that the prices vary wildly and am having a hard time choosing one because I don't know what is sufficient.

In my table, the cost of lumber for everything except for the table top are as follows:

Looks wise, I like all three. Walnut hits beyond my budget. My questions specifically are :

Any other suggestions on the design are welcome as well.

SPF (spruce, pine, fir) would be strong enough! That should pretty much tell you all you need to know here :-) People underestimate the innate strengths of wood all the time so don't worry, you're not alone in this.

Once you pass the consideration for strong enough you can then pick the wood based on other factors. Cost is probably the starting point for most of us, but durability[1] and aesthetics should perhaps be the primary concerns past that. They don't necessarily have to be considered in that order, given that a great many woods pass the standard for strong enough and durable enough (including softwoods) it could really be said to be all about looks at this point.

Yes. Many many existing tables are made from cherry.

It's not as robust, but not by a large margin. Walnut typically should be tougher — published Janka hardnesses for black walnut and American cherry (Prunus serotina) are 1,010 and 950 respectively and other numbers for walnut are higher too. Red oak would in general be the hardest of the three[2].

Looks wise, I like all three. Walnut hits beyond my budget.

Not sure if you'd thought of it but consider going with walnut for the top and something cheaper for the base.

Mixing species is now relatively common and both functionally and aesthetically can work well. Here if you went with a painted base for example it could be made from 2x material for all anyone would know looking at the completed table! But if you'd really prefer hardwood just plain old poplar is a great choice, for a good saving in materials, allowing for your no. 1 pick for the top which is of course the most on-show part of a table.

In case it's of help: do remember to factor in wood movement with how the tabletop will be attached to the cruciform arms coming out of the pillar. The fastenings that go into the arms at right angles to the grain in the top must allow for the top to expand and contract with changes in internal moisture content through the year. If needed, see What general considerations do I need to take into account for wood movement?

[1] Factor in expected or known use, don't merely go by how tough the wood is on paper since many soft or weak woods are of course perfectly acceptable for given uses where durability is of lesser concern.

[2] Red oak actually has many subspecies and their numbers vary widely from one to another. So just buying the wood as "red oak" as you're almost always forced to do doesn't tell you the full story about how strong the wood can be expected to be. But broadly speaking it is the hardest of the three and it can be outright the strongest across the board, just not always.

The short answer is that all three woods are similar in strength and woodworkers use all of them for projects similar to your proposed project. I would choose the wood based upon the appearance desired (color and grain of the selected pieces).

To make another point, depending upon where in the country you are, the prices you have may be a bit steep. Cruise the internet for wholesale suppliers or hardwood lumber mills. I get my material (Ohio) from a mill yard that produces hardwoods for the furniture industry, but they keep a small showroom for woodworkers with a wide selection of regional hardwoods. Prices are about 2/3 to 3/4 the costs you indicate. It's about an hour's drive away, but well worth the time.

Not the answer you're looking for? Browse other questions tagged wood-selection design or ask your own question.