How do I remove a stuck router bit from a plunge router?

I am borrowing a friend's "Skil 1823 Type 1 Plunge Router", and I am having some trouble removing the router bit that was already in it. Everything online has said that removing the collet nut should loosen (if not entirely remove) the bit while being unscrewed.

I've tried using a gloved hand, pliers, etc, but I can't seem to even get the old bit to budge. 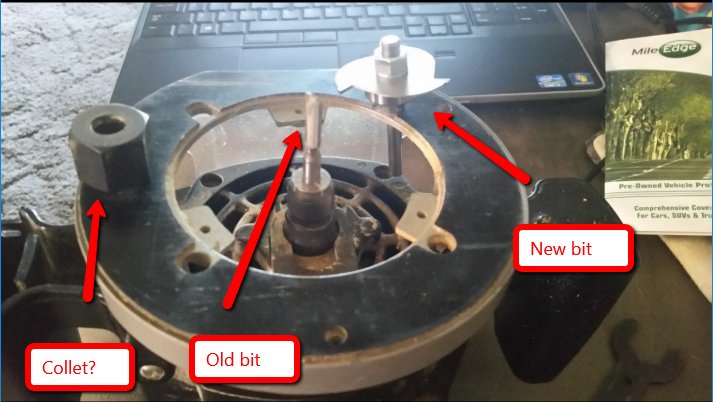 It looks like the collet nut has been loosened completely, and since it's a narrow bit, has been slipped completely off.

I'd follow keshlam's advice from his comment and tap sideways gently (this isn't the time to prove the Hulk is a weenie!) using a block of wood to protect the bit. You may have to tap in several directions to get it loosened.

Once you've got the old one out, ensure that there isn't a lot of sawdust jammed into the collet. Looking closely at your picture, I can see some faint tan lines through the collet where it is probably clogged with sawdust. If the bit's been left in there for quite a while, humidity will have settled into the sawdust and hardened it quite nicely. Clean out the collet as thoroughly as you can, using dental floss and a small pick if necessary to get the dust out. That should help prevent the new bit from getting stuck. I'd also recommend not keeping a bit in the collet to prevent it from happening again in the future.

It's also possible, depending on how long the bit's been in there, and what conditions the router has been stored in, that there's a bit of rust binding the two together. If the tapping route doesn't fix it (though that should break the rust free, as well), a very light shot of penetrating oil (like WD-40) should help. If there's rust on the old bit when it comes out, that's likely your culprit. A few very light touches with some emery cloth wrapped around a dowel (of smaller diameter than then bit's shaft) should get rid of the rust. CAUTION: It's possible that you might make the collet too large by doing this, so you may want to leave that part for your friend to do when you return the router, so it's his problem to deal with if he sands too much. (Remember: I did say very light touches!)

I just freed up a long time stuck bit on my Craftsman 315.17310 1/4" router by tapping just once on the side of the bit shank with a small brass hammer. I'd already tried many other options after I'd sheared off the e-clip and corresponding collet shoulder that are supposed to loosen the bit as you unscrew the collet nut and "raise the collet" out of it's taper (and thereby loosening the squeeze on the bit).

It looks like I can still use the router after all I'll just have to use the brass hammer to pop the bit and collet out of the taper. I also liberally put some nickle anti-seize on the collet male/female mating surfaces as well as the bore in the collet where the bit goes.

After fighting with the most stubborn unable to budge bit, I eventually freed it, basically using brute strength.

I then decided to try and ensure that I don't have the same problem again. What I did was to grind two flats on each of my router bits. I used my Dremel fitted with a carborundum grinding bit. You must ensure that flats are parallel.

I now use a shifting wrench to work out any stubborn bits, and so far it has worked satisfactory. As a shifting spanner is quite bulky and doesn't leave to much working space, so I measured an open ended spanner and ground shank to fit.

Not the answer you're looking for? Browse other questions tagged power-tools router tool-maintenance router-bit or ask your own question.

21
When should I use a spiral router bit?
4
I was thinking of buying a router. I tried a router bit in my power drill. It didn't work
8
How to determine if a router bit is safe to use?
11
How to prevent router bit from sliding in collet?
6
Router bit speed as a function of wood hardness
6
Proper bit selection for plunge router?
3
Router, how make a deep plunge cut?
2
Plunge router base plate has a bit sticking out - why?
4
Struggle to cut material with router, dull bit?