I'm wanting to know if using M&T joint on wall framing (for an outside shed) is a bad idea and or dangerous. I have a deck that I'm in the middle of tearing down, and I'm wanting to recycle the majority of the wood. Lastly my finances are rather tight so the less I have to buy the better.

I'd like to take the 2x12's that were the joists and rip them into 3 even pieces (roughly 3 9/16") each. This would essentially give me a bunch of 2x4's. I'd then like to cut A 1 inch tenon into the vertical studs with a matching 1" mortise on the top and bottom. Mentally, I think this will work as I've been told it was the old way of building walls. Below is a crude drawing I did in SketchUp. While drawing I realized the two outside studs can't go on the edge, so is there a way of still keeping the outside stud (maybe oriented differently) and if so how?

I've been following Paul Sellers for a little bit now absorbing his knowledge of how to use simple hand tools. But one thing that he either directly said or alluded to was to pay attention to the wood and work with it. I saw a documentary on Japanese woodworking and that got me thinking about how can I build things differently and "work with the wood" instead of against it. So that is why I am willing to spend the extra time to cut this all out for the framing. Now this isn't to say that I'm not going to use screws at all as I plan on using them to put the siding on, and I think I am going to need it for the roof (unless there is a technique for that too!) Anywho. Thoughts?

While using 'proper' joints is the way that some shed walls were constructed in the recent past* I think I should say something about why this isn't done as much today — because other ways are faster (much faster) while still producing a structure that's fit for purpose.

There's a strong parallel to be drawn with the way that a traditional timber-frame building was, and in some places still is, put together versus a modern house roof frame. The traditional timber frame uses various well-cut joints that intersect nearly perfectly, then often locked in place with pegs, and originally a house's roof frame would have featured some similar joints (derived as they were from trad timber framing practices). But today there's almost no actual joinery and we largely rely on metal hanging brackets, nails, screws and bolts.

Now it could be argued that the old way was better, producing stronger buildings that hold up better over time, but even if we accept that as a given there's no denying that the modern way produces structures that are strong enough. And they can be made significantly stronger than the norm by just exceeding code (e.g. using more numerous and/or longer fasteners, screws instead of nails in certain places, using every hole formed in a joist fastener and not just the minimum required by the regs).

So my advice would be to go ahead with this sort of construction** only if you want to do it as an exercise in laying out and cutting of joints, for the pride in knowing how the shed was put together when you're done.

But if your primary goal here is merely to end up with a solid shed then be confident that modern metal fittings, galvanised nails or screws will produce a structure that's good enough, both in terms of strength and longevity. My parents' back garden had a shed in it that was taken down recently; it was made of softwood of indifferent quality as most sheds are over here are and was largely put together with staples (yes, staples) and yet it withstood plenty of bad weather, including two or three hurricanes, in the 30+ years it stood without losing its roof, being structurally undermined or even losing a single siding board. It was heavily weathered when it came time to take it down recently, with many loose boards and some rot. But it still had to be cut apart using a reciprocating saw! So build just a bit better than this and your grandchildren will be wondering what to do with the shed grandpa Snyder built way back in 2016 :-)

*For a bit of historical perspective, I have electronic copies of carpentry books dating from 1875 through to approximately the time of the First World War and looking through them just now none show joinery used for stud wall construction that I could find. All the drawings appear to show basic butt-jointed timbers used throughout, presumably to be toenailed in place as is common practice today.

**But not exactly what you've shown. The orientation of the wood in the rail in the Sketchup image doesn't make best use of the strength of the wood. It should be edge-up, not face-up, to best resist bending forces (maximising 'beam strength'). And with this orientation you wouldn't go ahead with your planned M&T joints, a better fit would be half-laps. You could use bridle joints as an option but they're more difficult to cut and probably provide no real improvement in strength.

When traditional joinery techniques were employed on buildings, it was in the form of timber framing, not stick framing. Timber framing employs fewer, larger pieces of wood, which means that the joints can be heftier (especially important for softwood), and there are fewer of them to cut (saving your time).

If you are committed to using traditional methods on your shed, may I suggest timber framing instead.

What you show can certainly be accomplished, although it is a bit more challenging than simply nailing studs together. To accomplish your design you will need a saw, drill, chisels and wood glue. The tenons on the vertical studs are simply cut with a saw. Mark the depth of the tenon around the four sides of the tenon first and cut them to the depth of the wast to remove and mark the extent of the tenon on the top and down the sides of the stud and cut down on the outside of the line on all four sides. Next mark the location of the through mortises on the top plate and use a drill to remove the majority of the waste being careful to stay on the inside of the perimeter lines. Next use a chisel to clean out the mortise walls neat, again staying inside the lines. Finally clean up the edges of both the mortise and tenons so that they slide together snugly. I would use a waterproof glue to secure them together if the assembly will be outside.

While drawing I realized the first stud can't go on the edge so that would take some thinking.

This situation will also work, but instead of a square tenon, extend the mortise to the end of the top palate and modify the tenon accordingly. A good glue job will hold the final stud in place just as well as if it were in a fully enclosed mortise. In a worst case you could add wood screw through the side to connect the two pieces and hold them in place (just remember to predrill the hole for the screw).

I believe that using the technique you have in the image will result in a weaker structure than using standard fasteners. The wood between the mortises on the horizontal beam is unsupported. Even if you glue the joint, you will have an end grain to edge grain joint, which is relatively weak.

While it would work for a small structure, it would not pass any current code without some sort of fastener to prevent the roof from being lifted off. Nails are typically used instead of screws because they will bend rather than break when subject to lateral stress.

I am renovating an old wooden framed house and it has mortice and tenon joints in all the framing studs to top and bottom plates as well as window and door openeings, each joint is completed with one nail through the tenon 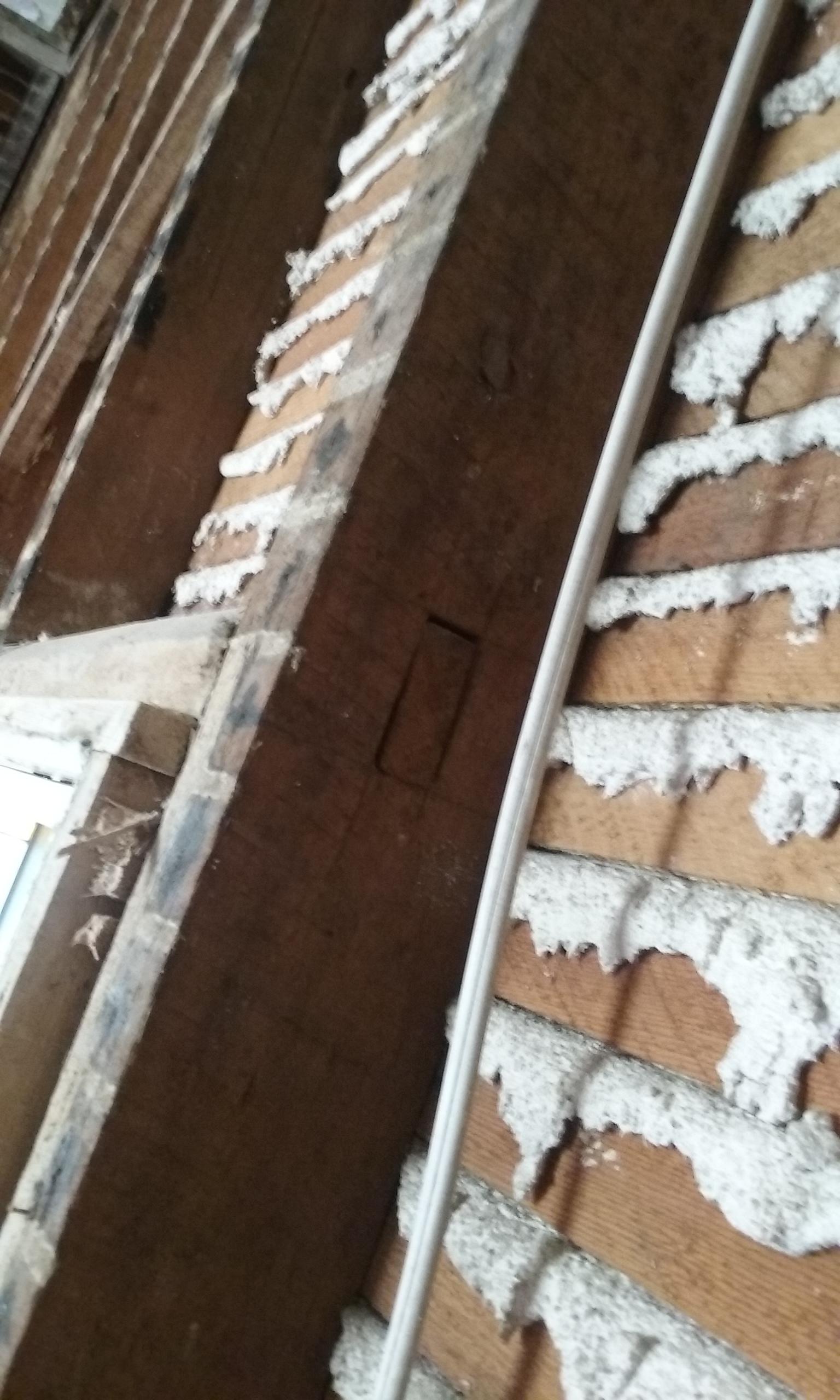 Not the answer you're looking for? Browse other questions tagged joinery mortise-and-tenon or ask your own question.