How can I repair raised boards on table top?

The boards on my secondhand hard wood table top have started to lift at the join in a couple of places. I assume it's due to moisture making the timber swell. What can I do to fix this and prevent it in the future? 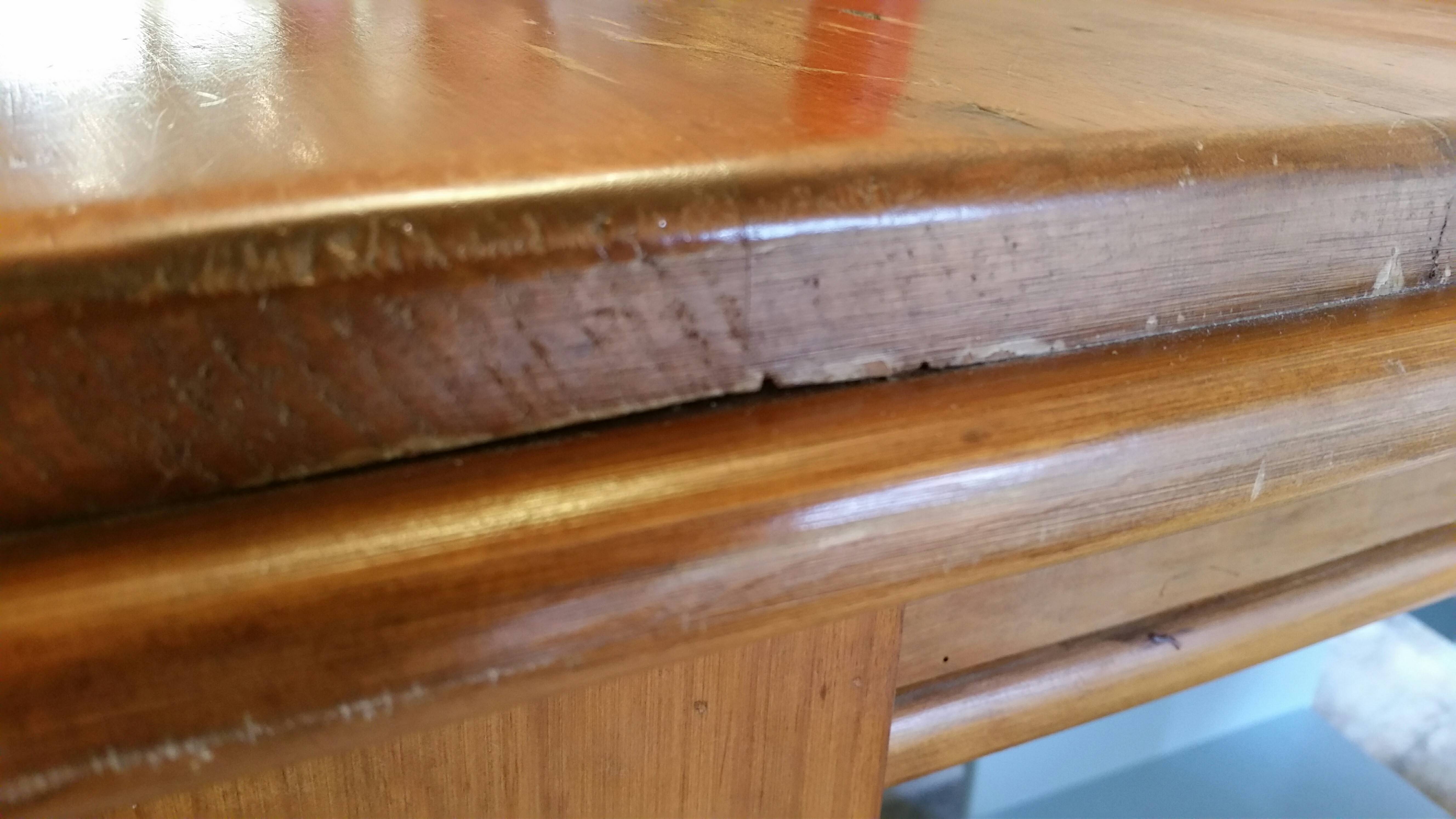 EDIT: Here are a couple of photos of the underside of the table at the point where the boards have started lifting. The first is on the outside of the leg; the second is on the inside of the apron. 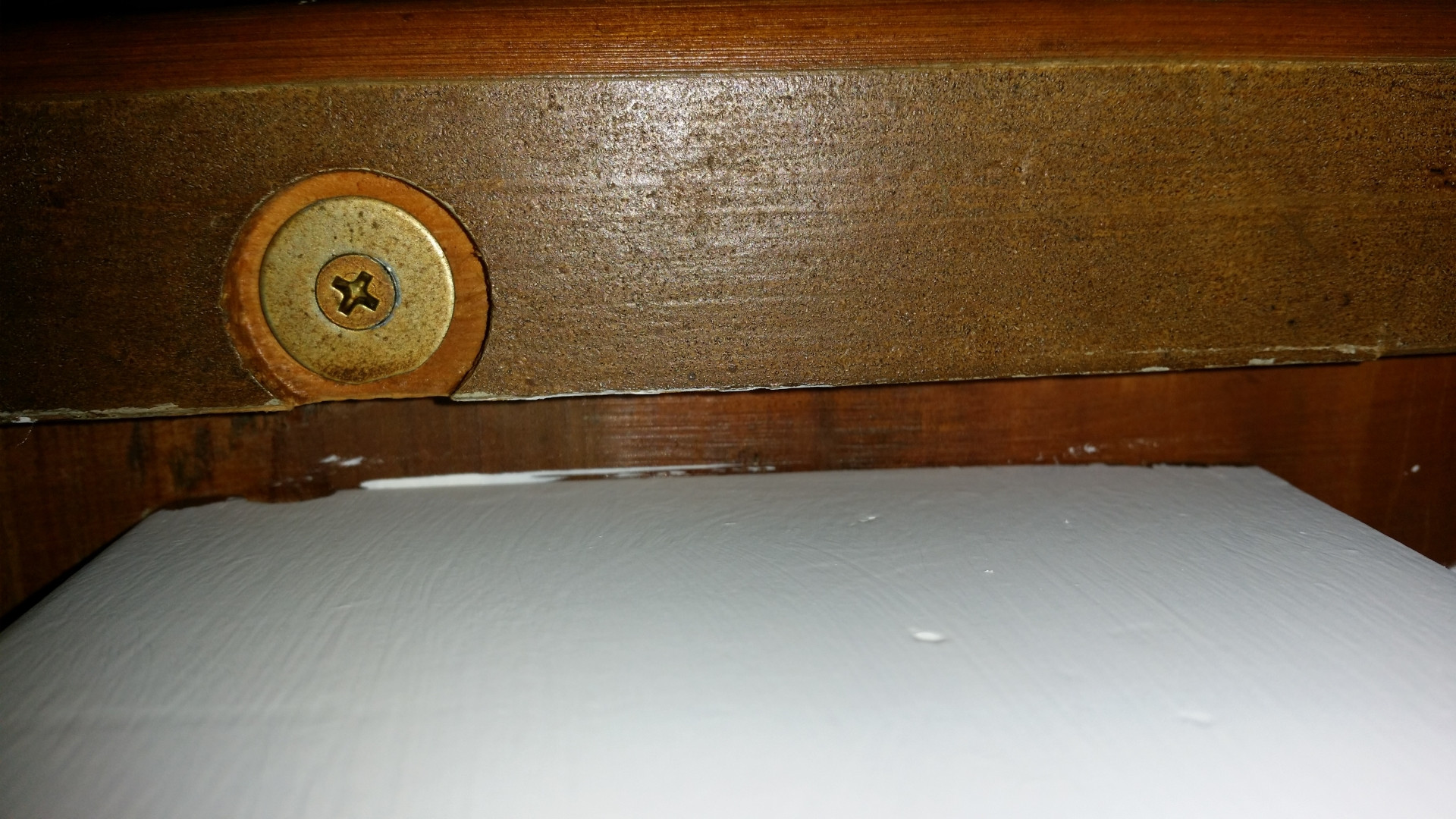 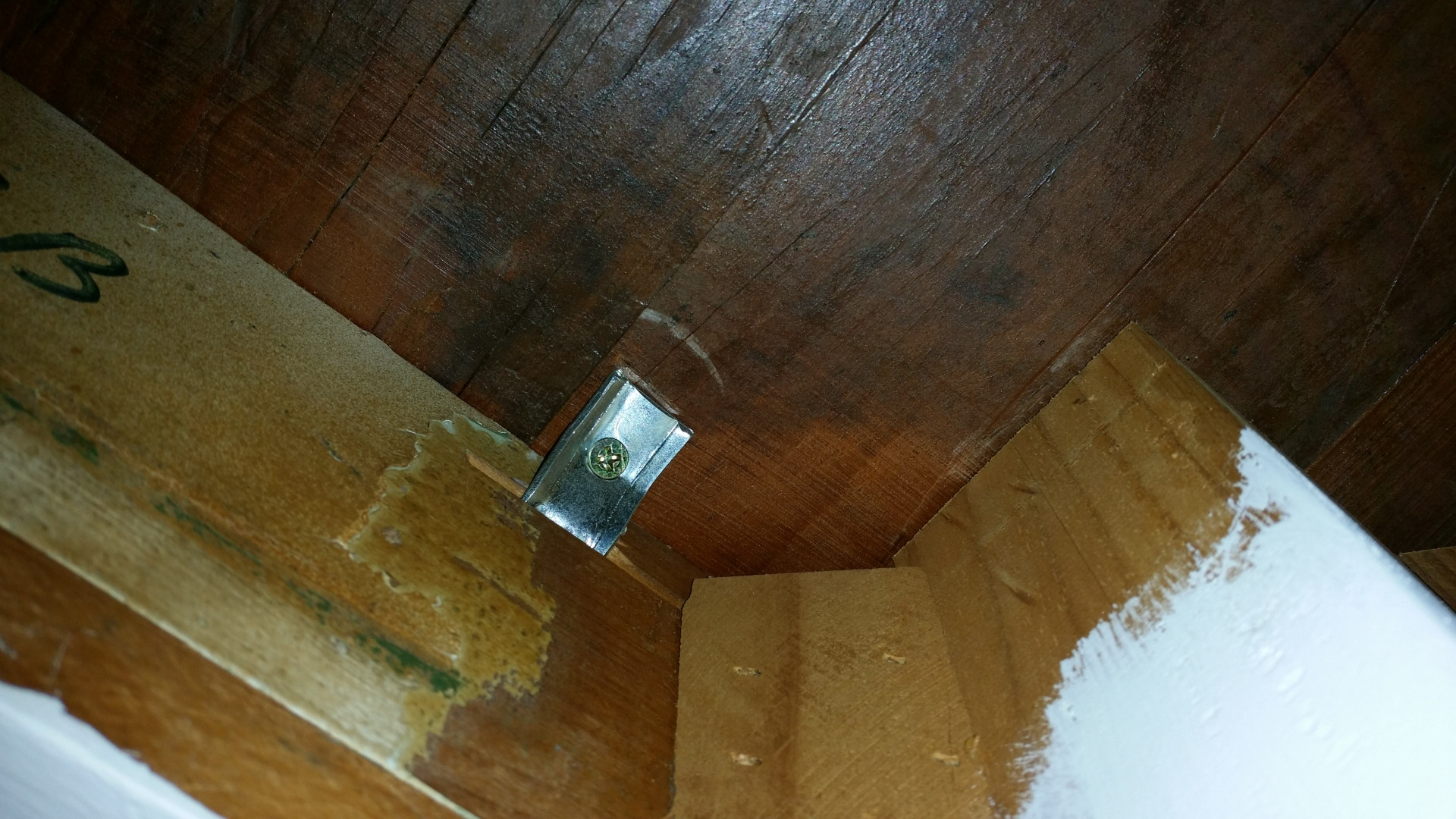 Often (not always*) when something like this happens with a wooden product it indicates a problem with the way the piece was constructed, which is sadly not uncommon in manufactured pieces (this is not, as might be supposed, only a recent issue as books from the early 20th century mention it was not uncommon even back then).

Just from looking at the one image you've provided the only thing that jumps out is there's a cross-grain situation, with the boards making up the tabletop panel running one way and the grain in the frame (?) element or decorative bullnose running the other way, so there are definitely at least some problems with the way this was put together.

Rectifying something like this can usually be done, but it may not be easy or practical. It may require basically restructuring the table, or it could be as simple as changing the fixings used to hold the top in place, we can't tell without seeing more photos of other aspects of the table's construction — a key one being how the top is attached to the framework or apron.

*Other times it's a problem with the wood used. The construction details of a piece can be perfectly good and it can still warp or distort if the wood isn't quite up to snuff (e.g. it wasn't dry enough before being used) or perhaps if the factory was drier than where the table ended up, so some expansion took place in every piece of wood used which the design can't accommodate.

Those pics help a bit in understanding what's going on, although it's hard to visualise the entire piece the way you would if you could look at it in the flesh. See that bent metal (?) bracket screwed into the underside of the top? That's the equivalent of a hardwood button (on the left here), one of my preferred methods for attaching tabletops. If there are matching ones spaced around all four sides the top is attached properly, and the raised boards may have been caused by a poor glue joint or one or more damper boards.

My money is on less-than-perfect glue joints being at least part of the problem. The underside shows us the joints 'warts and all' and they are not great. In fact a few are pretty bad — glue joints should be very thin for strength, at best invisibly thin (less than a human hair). Certainly no open gap! This indicates that either A) the jointing of the edges wasn't done well initially (so they weren't straight and square) or B) the glueing wasn't done well. One or both of these allow the joints to open up over time.

I would say you need to redo the top and do different joint jobs to prevent or make thinner board cuts, like 2-3 inches. For the joint jobs there is many of them out there, I am talking about router bits. Any of those should help you in this situation. You could also try planing if you have a planer on the tops and bottoms.

Not the answer you're looking for? Browse other questions tagged warp tabletop or ask your own question.

18
How can I attach a solid table top to perpendicular cross rails?
4
How can I flatten out a cupped piece of 3/4" plywood for a wood counter top base?
8
Ikea Beech Table top conditioning
3
Table top popping up
5
Repair / Restore Veneer Covered Table
0
Filling crack in walnut table top
5
Glue-up for butcher block-style countertop
0
Cut down a veneered table top
3
Will my table top hold 300 lbs?