How to treat floor-facing edge of OSB for a stool leg?

I'm making a bar stool from OSB. I do know it's a very questionable material choice, but it fits my aesthetics, and I'm willing to try my chances.

I'm going to varnish and sand all people-facing edges , as suggested on DIY SE.
I'm still concerned with the edge facing the floor: 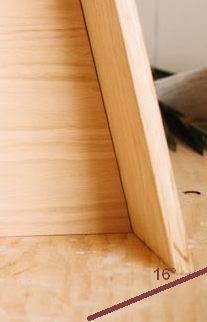 What would be better(less labor and material cost, longer lasting) given the choices below?

The first thing that comes to mind is a nail-in furniture foot like this: 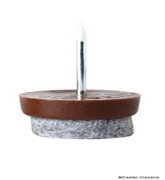 Image from this Amazon product page - no endorsement implied

However, that doesn't really fit with the aesthetic of your stool, and probably isn't what you're after. I would imagine that the nail would be difficult to drive straight into your thin OSB, probably wouldn't hold forever, and the foot itself would be considerably larger than the leg.

And, now that I've shot down my suggestion... I thought I'd just throw it out there.

Route a groove along the length. Glue a piece of hardwood into it.

This will give the stool a long hard piece of hardwood to stand on and wear down instead of OSB. The stool will be elevated a millimetre or two.

I'm making a bar stool from OSB. I do know it's a very questionable material choice, but it fits my aesthetics

OSB gets a lot of hate these days (reflected in some of its unfortunate nicknames, including Old Sh*t Board) but I think a lot of it is unjustified. The material has at least a few things to recommend it, including its high strength and moisture-resistance. It's also very heavy, which is usually cited as a negative* but of course might be advantageous in certain applications.

And as you say it can fit an aesthetic: 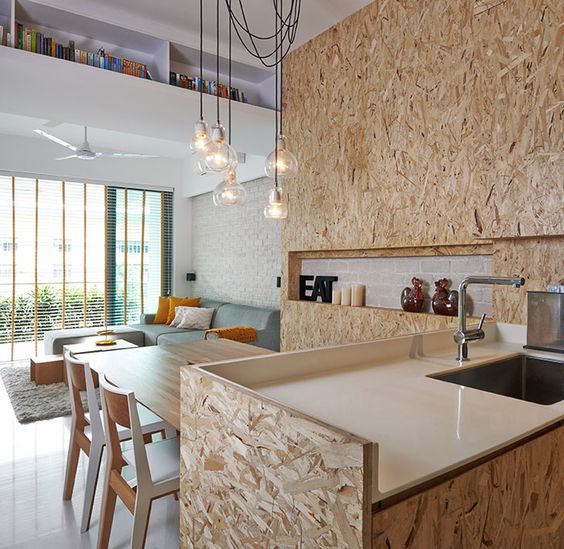 I don't see this as any different to proudly using MDF or plywood where in the finished project the material — face and edges — is seen for what it is, not hidden by joinery or an opaque finish/laminate. Eames lounge chair anyone?

The general method for helping to prevent this in solid wood is what I was going to suggest first as it wasn't on your bullet-point list. This is to add a small chamfer around the bottom edges.

Adding a chamfer is basically the same principle as rounding over the edges, but simpler and easier to do, while being just as effective. By doing this the actual arris (the very apex of the edge) won't drag against the floor when the piece is moved, usually enough to prevent the lifting of chips/grain from the face.

In solid wood a very modest chamfer can be effective, but because this is OSB the thickness of the surface flakes should dictate the width of the chamfer you use.

Sealing the edge
Your bullet point number three is a good idea, not as an option but to be done in addition to chamfering or rounding over the edge.

I was going to suggest sealing the edge in contact with the floor anyway, but using epoxy.

Epoxy is sometimes used to treat the end grain of legs on outdoor furniture, or on something intended for a location where the floor will be washed down regularly, sealing the end grain and giving very good waterproofing. A few coats of varnish will accomplish the same thing, the epoxy is just a little to a lot faster depending on the varnish being used.

If you want to use epoxy, heat the edge of the OSB with a hairdryer first, then lay on the glue and it'll soak in well as the wood cools. One application should be sufficient.

I should note that it's likely that this isn't needed to prevent rot, only to prevent discolouration. OSB is generally very weather-resistant from what I've read recently, and only last week I saw some OSB site doors in another part of the city that I know have been exposed to the elements for much longer than a year (I think close to three years) and other than having silvered/greyed they are in good shape. Much better shape that I would expect if an exterior-grade plywood was used given the generally poor quality of that these days!

*I notice also that weight is rarely given as a negative when it comes to heavy solid timbers :-| We woodworkers can be a very capricious lot.

3
How to attach steel strip to OSB board
2
Can I make a stool from thinner OSB
5
Furniture name for waist-high floor-sitting shelf cabinet thing
5
How to build a double X table leg
3
Leg basics for stools, chairs, table
2
What should be done to treat decorative wood for outdoor use?
4
Edge glued panels vs. plywood for furniture
0
Do I need to treat or finish lumber if I want to use it for a bed