I have a #5 faithfull handplane (don't judge me, I didn't know any better!) that I tried to get working last year and failed miserably, so it sat in the cupboard for 6 months whilst I sulked. Since then I have bought a couple of books, and read a few forums, and i want to try and have another go at working with hand tools to make basic things for the house (a new gate, a repacement door, blanket boxes etc).

Cost is more of an issue than time, I am doing this to do soemthing creative with my hands, but as I do not know yet if this is somethign I will actually enjoy long term, I don't want to buy a lot of equipment that could end up on ebay in 2 years.

The easiest way to check if the sole is flat is to turn the plane upside down and lay a trusted straight edge across it in various places and orientations. If you can see light coming thru between sole and straight edge -- assuming it isn't a grooved sole -- then it isn't flat.

There are articles/videos on the web that will guide you in flattening the sole. Generally they do assume you have a reasonably flat reference surface to support the sandpaper used to grind the sole flat.

The plane iron can probably also benefit from some flattening and honing, especially for inexpensive planes.

It should be possible to tune this up to get good performance from it.

This is going to run long so TL;DR warning.

I have a #5 faithfull handplane (don't judge me, I didn't know any better!)

No judgement here! Two Faithfull planes formed the core of my handplane collection when I started out and I use both still regularly. I actually rate the Faithfull planes as possibly the best of the budget planes available over here, in general they have noticeably better fit and finish than Silverline planes for example (although they too can be made to work well, see this video from Graham Haydon, Tuning Up a Cheap Handplane and note how surprised he was at how well it could be made to work).

Edit: I've just found out that Graham Haydon's videos have been removed from YouTube unfortunately.

You can put aside the feeler gauges for now. This is a 5, a jack plane, if used in its normal function it's not necessary for the sole to be absolutely flat. We should all remember that wooden planes were used for a very long time and their soles can't be expected to remain as flat as a machined piece of metal, and yet they did all that their owners required of them (and still can, there are abundant numbers of woodies of all sizes that are well over a century old and still just as capable as the day they were completed).

If you are lucky enough to buy a plane with a perfectly flat sole that's a good thing and the plane will work excellently.

However, many out-of-flat conditions on the sole of a plane are actually acceptable. Here are some examples, the coloured zones in each case indicating low spots: 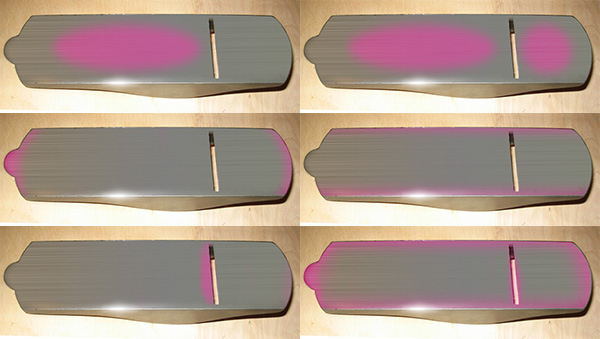 I want to be very clear here, all of the above are acceptable and the plane can function well depending upon what you need it to do.

The bottom two will cause consternation with some viewers, and the conventional wisdom is that a low mouth opening is a dealbreaker, but that's not always the case. If the plane is primarily used for rougher work (as some jacks are dedicated for, also very applicable to scrub planes) the low mouth is of no consequence to the plane's function.

Note: there are numerous other issues that can cause, or contribute to, a plane not functioning well. This includes sharpness, depth of cut, the position of the cap iron/chipbreaker in relation to the edge, how well the cap iron's leading edge is fettled and the size of the mouth (if the frog is set forwards shavings can easily be blocked from rising through the throat).

Yes you can do this using paper if you decide it's needed. But instead of regular wet-and-dry paper I would recommend that you do, at minimum, the initial bulk removal using the type of paper sold in a roll as it's very strong and you can stretch a long length of it out, this makes the lapping go very much faster if there is a lot of material to remove. So instead of stroking the plane back and forth over 25cm (10") or so you can do it over 60cm or longer (well over 2'). And if you find you have a lot to remove start at 80 grit at minimum although beginning at 60 grit would not be a problem. You can actually start and stop at 80 grit if you want to, there's no need to work up to 220 and finer as many people do but that's a discussion for another day.

Since you mention your Formica worktop, yes that should be suitable. Although many people prefer to do this kind of work on glass or a scrap piece of polished granite worktop material should be flat enough as it is made very flat initially, is inherently very strong and stable and is kept flat by the framing that supports is. Somewhere along a length of kitchen work surface there should be an area flat enough for this kind of thing, but check with the edge of a long steel rule or aluminium spirit level to confirm.

Cost is more of an issue than time...

This is one reason to prefer the roll abrasives over sheets, it's usually far cheaper for a given run of paper. It also typically lasts longer, so you save in two ways. Resin-bonded paper like this can last a lot longer than an equivalent grit of silicone carbide paper (the dark grey stuff), outlasting it by as much as a factor of 10, although good and bad examples of both types of paper are out there.

I don't want to buy a lot of equipment that could end up on ebay in 2 years.

Other than the abrasives no equipment is actually needed for flattening a plane's sole. Although you can do some of the flattening using a mill file or machinist's file (and many machinists would recommend doing so) it is quite common today for woodworkers to do the entire job on abrasive paper, cloth or film.

Beyond flattening the sole
It's important to note that the sole is possibly not the only part of a plane that might need fettling. If you want to smooth out the leading or trailing edges of the mouth, or work on the mating of the frog to the body casting, these are usually jobs for a file, so at least a flat needle file or warding file can be useful, or a mid-size machinist's file.

Files can also be used for relieving sharp edges along the sides of the sole and for rounding the leading edge at the toe and the trailing edge at the heel, although that can be done perfectly well with abrasive paper too if preferred.

5
Most general purpose hand plane for limited budget
4
How do I use a handplane to smooth a cutting board?
5
How to flatten stubborn hollow on the back of a plane iron?
4
Different ways to set up a Number 4 bench plane
4
How do I plane the edge of a board such that it stays square to the face?
3
Trouble flattening a #7 jointer plane
2
Can I use a 12” granite block for fettling a #5 plane?

7
Static Electricity While Using a Hand Plane
5
Most general purpose hand plane for limited budget
6
hand plane controls (bevel down)
5
How should I set a hand plane down?
2
Can I use a 12” granite block for fettling a #5 plane?
5
How do I set up the INGCO hand plane?
4
Help me identify this hand plane
5
Hand plane gouging wood even with fine adjustments
1
Preventing poor groove geometry with plow plane?
0
Hand plane blade lower on one side