Best way to make round coasters

A friend has asked me to make her a bunch of 4" round drink coasters. I'm trying to figure out the best most economical way to do it. I made one this morning before work by just taking some flat stock and cutting it out on my band saw, but that didn't really produce a perfect circle even after a little sanding.

I'd thought about maybe getting a cheap lathe and turning a 4x4? I don't have any turning experience though and it seems a little on the dangerous side to try to round up a square piece of wood like that.

Making things round is what lathes do. Turn a piece of wood and then use the band saw to slice off each coaster. You can rip a 4x4 into more of an octagon shape with the band saw to make it faster and safer to round it on the lathe.

If you want to do this without having the end grain be the face of the coasters, here's a method you can use. It involves creating a template you can use with a router and flush trim bit to make copies.

First, prepare the work pieces that will become the coasters the same way you did before: using your bandsaw, cut a rough circle. Cut it a little big, maybe 1/16" - 1/8" larger than the final dimension of the coaster. You'll clean it up by tracing the template with a flush trim bit in your router.

To make the template, cut a 4" blank using a hole saw drill bit such as this one. Hole saws leave a plug of wood, but will also have a hole in the middle of the plug where the pilot bit cut through, which is why you can't just use the hole saw plug as a coaster directly. (Unless you're okay with your coasters having a hole in them! Perhaps it's a feature, not a bug!) Clean up any roughness on the edges by sanding. I would use my bench sander for this, but you can do it by hand, too. The template should be made out of something about 1/4" thick. Hardboard/Masonite is my usual go-to for this.

Now adjust your router so the bearing on the flush trim bit will spin against the template. Route around the template, removing the excess.

Finally, pop off the template and remove the tape. You have a round coaster! The template can be reused to cut as many as you care to.

Since you have a bandsaw I think the simplest option for you here is a circle-cutting jig. You can throw together something small and basic for just this job, or with only a bit more effort build something more sophisticated which will deal with cutting circles of many different sized for many years to come. Either way you'll be cutting perfect 4" disks in no time.

There are many many variations on such a jig, here's one: 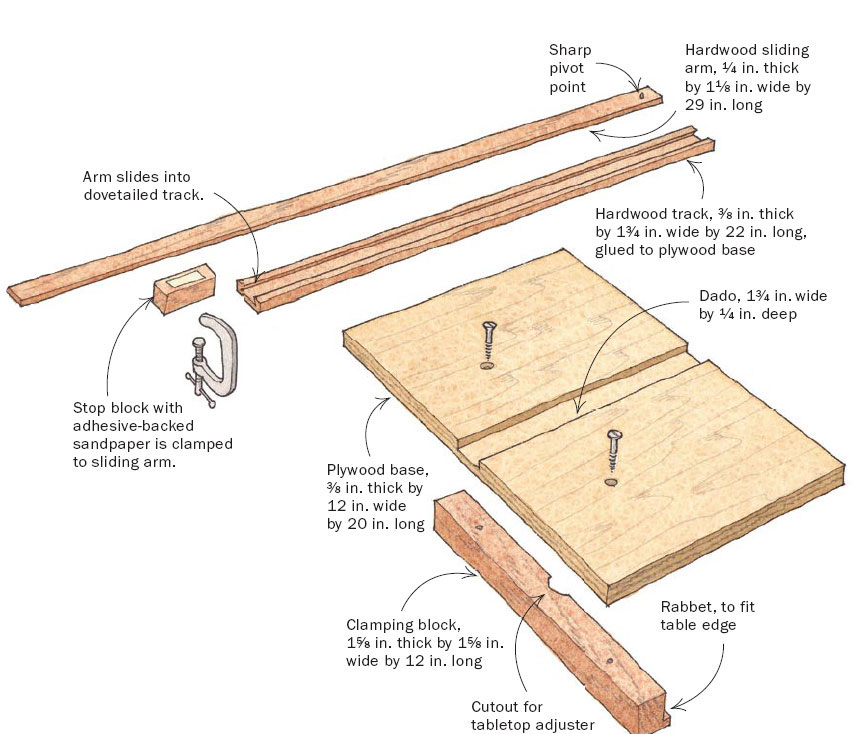 This is from this article on Fine Woodworking: Circle-Cutting Bandsaw Jig.

The text suggests "To avoid a center mark on the stock, attach a sacrificial surface to the underside of the workpiece with double-sided tape." In place of the double-sided you can also use the tape & superglue trick previously plugged by Charlie Kilian, or hot-melt glue if you prefer.

If you'd prefer to see a few more styles before going ahead with making it here are a few additional versions:
Techniques to Cut Circles With a Band Saw on The Family Handyman.
How to Cut Perfect Circles on a Bandsaw on Startwoodworking.com.
Super simple bandsaw circle jig on Instructables.

Note: most of these jigs can be fitted to a router table to allow the router (fitted with a straight-cutting bit) to do the same cutting task. This should result in a smoother finish requiring much less final sanding.

I would recommend one of three things which will depend upon the tools you have.

I was hoping that you might have a disc sander, but you didn't mention one. However, if you have a table saw you can mount a sanding disc on it and it will function as a small one (but big enough for your purpose.) Once you have that, you'll also need a piece of plywood that measures 4 or 5 inches wide and a couple inches longer than the distance from your saw blade to the far edge of your miter slot, and a piece of scrap hardwood at least as wide as your miter slot, slightly shallower than the slot, and as long as the width of your plywood piece.

Cut a rail to a little less than the width of your miter slot (so that it fits in the slot with about 1/8 inch of play left) from the hardwood scrap and mount it to the bottom of the plywood so that the plywood's edge, when the rail is placed in the slot with its edge pushed against the close side of the slot, comes close to the sanding disc's face (1/8 is probably close enough.) Drive a finishing nail straight into the plywood so that while in the close position the nail center is 2" from the sanding disc and approximately centered on the plywood jig. Snip or grind off the nail so that it protrudes about half the thickness of your coasters from the surface. This is your circle-sanding jig for the coasters. Note that the pin is less than the thickness of the coaster, allowing you a "show" side with no center hole. My illustration's not to scale, but I hope it shows the concept adequately, didn't want to spend all afternoon on such a simple device :) 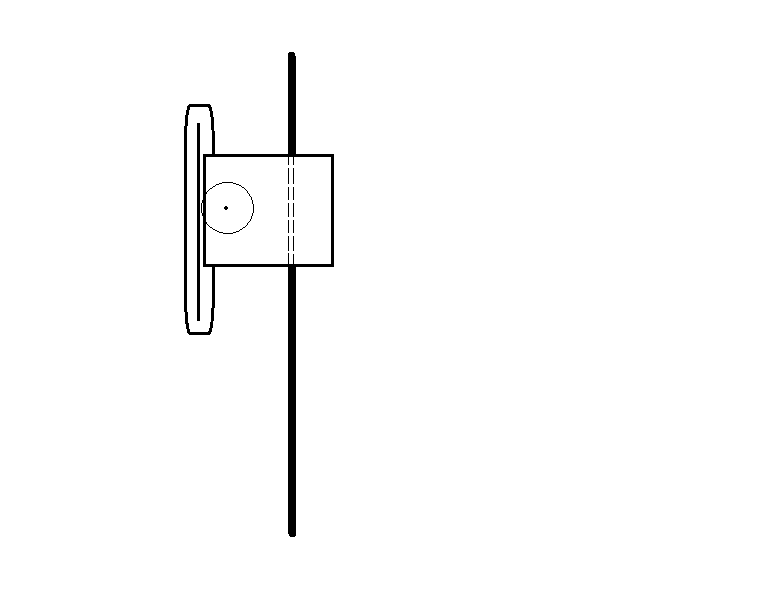 Now, mark the centers and 2" diameter edges of the coasters on your workpiece(s) on the non-show side (bottom). Make a hole in each rough coaster at its marked center ON THE MARKED (non-show) SIDE with the same size finishing nail as you used for your jig pin, deep enough to accommodate the protruding pin fully. Cut close to the circular edge line but not quite up to it with your bandsaw. Your cut should be at least 2" from center at all points, yet not by more than the 1/8" of play in the jig. This should be easy enough to attain, and will allow you to place the roughed coaster on the jig when away from the disc, and when the jig is snugged up to the close edge of the slot the disc will make contact. This is how you finish the coaster: you place the coaster on the jig when in the far position, then move it into the close position and gradually turn the coaster on its pinned center to work the edge into a perfect circle. You can probably scoot your fence over to the right-edge of the jig to hold it in place in the close position while sanding. Be sure to keep a hand on the coaster at all times when sanding, as you don't want it flung away. Complete the finishing by breaking the sharp edges with sandpaper, roundover router bit, or whatever.

1
Table Saw Challenge: Making a Sled for a 2' Circle

10
How can I keep a cedar tree round from checking?
5
What would be the best way to bevel an oval table top?
2
Best way to join frame members in a rectangle box using bolts?
4
How to cut round corners on a 4x4?
5
Best way to attach metal legs to corner desk? Do I need extra support?
2
Best way to attach a curtain pole finial with a 25mm recess to a 35mm curtain pole
0
What is round firewood called?
1
Can I use douglas fir to make cutting boards and how thick should I make them?
2
What power tool is best suited to use for small straight cuts?