Are there any tips when working a large surface with an handheld electric planer?

A friend got me an electric hand held planer that he thought I could use to help clean pallet boards faster then what I was doing. For the most part it has sat in the box. Until recently though when I started using it to clean boards edges.

I have several 2x12 pine boards that I wanted to get the paint of off and preferred hand tool / muscle methods but I found myself losing patience when I realized the amount of work involved when looking at the pile (I should not care so much for pine). So I thought about giving my hand held planer a try.

It worked very well for getting the paint off and I checked the blades frequently to be sure they were not getting clogged or gummed (they were not in any case). I was having a huge issue keeping the work relatively flat. No matter how hard I tried the planer would be at some sort of angle and cut into wood on one side more that the other (usually the side opposite of me).

So I have a clean board now but it looks like ass. At least now I know that I can put it through a thickness planer with less worry.

Any thoughts as to what I was doing wrong or ignoring that what I should be doing right? It might not be the right tool for the job but it is what was available. I had it set very low so as to not burn it out and took many passes and moved onto the next section (that in itself might have been the issue).

In any case I was having a huge issue keeping the work relatively flat. No matter how hard I tried the planer would be at some sort of angle and cut into wood on one side more that the other (usually the side opposite of me. ).

You may have been trying to take off too much on each pass which would be a critical factor if that's the case. Even at a low speed the bite into the wood will make control difficult. Unlike a belt sander, with a planer you can control the projection of the blades and because they're so effective having them set to remove the smallest amount possible (equivalent to 0.1mm?) will make it most controllable.

In terms of technique I think you should be trying to have the planer 'take off' at the end of each pass, like a plane lifting off from the end of a runway. This is even good practice with a hand plane, and I seem to recall when watching experienced users wielding planers that they do this at each stroke. It contributes to the fatigue of using them as you're lifting with arms extended, but that can't be helped.... probably a good reason they shouldn't be used heavily by the amateur woodworker.

It might not be the right tool for the job but it is what was available.

The right tool is often the one that's available :-)

But this may be a good illustration of why planers aren't the ideal tool for smoothing larger surfaces. They're great at removing wood quickly, especially from edges narrower than the cutter head, but they shouldn't be expected to produce a good flat, smooth-ish surface as if you'd dressed the board with a jack plane.

Mentioning the jack just above brings to mind another thing, if you were cross-grain planing it should be expected that the surface isn't great after that step. When flattening a board by hand all cross-grain work, whether by scrub plane or jack plane, is further flattened out by planing along the grain afterwards.

It's only that last step that produces a decently flat surface, which is then taken closer to finished with a try or jointer plane before final smoothing.

In your situation this planing along the grain to flatten off should be done by handing off to your thicknesser as you did, so within reason you should expect the board to look rough before it goes into the thicknesser, which will combine jointing and smoothing operations in one.

My belt sander has an attachment that helps prevent it making gouges by tilting it while sanding large flat surfaces. I think if you could build a small guide to attach to the far side of the planer to prevent the planer from tilting it might work better for you.

making a frame for the whole thing would be the most stable, but just putting a guide on one side would do wonders, both sides would give you lots of confidence and little need to worry about unbalanced gouges. 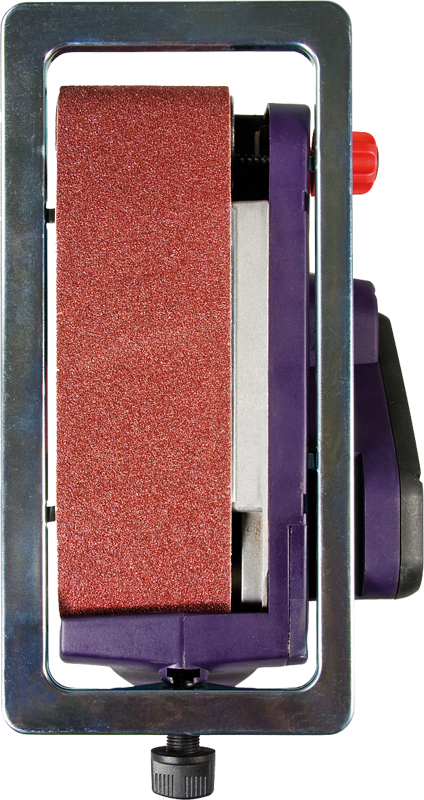 Not the answer you're looking for? Browse other questions tagged technique power-tools or ask your own question.

8
What is an electric planer (hand tool) good for?

14
Best way to flatten boards by hand
13
Why does direction matter when using an electric router?
8
How can I make this faux inlay?
5
How can I taper a slightly misaligned board with a handheld power planer?
9
Body positioning while using a jointer
7
My jigsaw is terrible at cutting vertically through a simple 2x4
12
Issue sanding between coats of polyurethane
11
Router tears wood, leaves streaks
7
Are there any best practices when using dado blades or stack?
4
Is there a name for this particular cutting tool used by people needing to cut into walls to fix things inside?