What is the difference between a worm and sidewinder drive circular saws?

I didn't even know this was a thing. Then I read comments in this question

Worm drive saws are long and unwieldy for all but the burliest of men. I found them a real pain to work with. A Makita is a nicely-balanced tool and will last a woodworker 200 years. We used them like rental cars for years with nothing more than motor brush and cord changes.

I aspire to be a burly man on occasion. What is the difference between a worm drive and sidewinder drive circular saws? Do each lend better to certain applications? What do I need to know to use each properly? Are there other types where modern circular saws are concerned?

I agree with what Steven has to say. Unless you're routinely cutting 2" thick oak or hickory slabs, a modern direct-drive saw is likely more appropriate. Equipped with a sharp, suitable blade it will cut nearly any wood workpiece with ease.

To clarify my quote in the question, worm-drive saws should be considered two-handed tools for most folks. That usually means that your workpiece should be clamped or secured to keep it stable. Direct-drive saws are more easily operated with one hand.

Worm drives use a worm gear to connect the motor to the blade. Generally speaking, they are more powerful than direct drive saws where the motor drives the blade directly.

They are also larger, heavier and more expensive than direct drive models.

Think of them like a cabinet table saw versus a contractor table saw. Both will get the job done but one will last longer and be up to tougher tasks.

A lot of contractors prefer direct drive since they are lighter and smaller.

Here is a picture that may help: 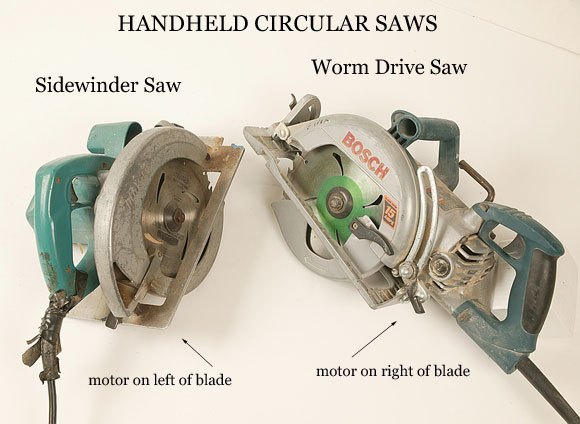 Funny, I'm left handed and a relative featherweight, and I love my hypoid saw. (Brief diversion: among the things tagged as worm drive there are the classic Skil brand saws that are actually worm drives and require regular oiling, and Makita makes a hypoid that offers slightly less torque than a WD but is more efficient and thus doesn't cook the oil in the gear case. So you never need to change the oil in the hypoid.)

Anyway, back to the question. WD saws get the burly tag because they're heavier than sidewinders. If you think that gravity can be used to your advantage, then a bit of weight could be considered a good thing. My personal opinion is that they track better because of the weight and partly because the handle is behind (rather than above) the blade.

As noted, I'm a staunch lefty, and I don't have a problem with the blade-motor relationship.

I think geography has a lot to do with what saw you end up using. WDs are popular on the west coast of the US. When I lived in Ontario, my hypoid was an outlier.

Application-wise, I can't think of anything that one saw would clearly do better than the other. If you were cutting stair stringers, it might be nice to have one of each style on hand, but that's getting pretty esoteric.

As far as things to know about saws, there's not a lot of difference between them: control the saw and control your workpiece. Wear protective equipment.

I have worm drive and sidewinder saws, biggest difference for me is that the worm drive saws are narrow, since it does not have the motor sticking out the side.

The worm drive spins at a slightly lower rpm but both saw types seem equally powerful, at least with my 15 amp milwaukee and skil saws.

Not the answer you're looking for? Browse other questions tagged power-tools tool-selection circular-saw or ask your own question.

12
What are the advantages of band-saws with multiple speeds?
8
What is the difference between a dead center and a live center?
4
What are the differences between the K4, K5, and Foreman Pocket-hole Machine?
3
Choosing a saber saw for long blades (12" and 18"). What does the maximum length specified in a saw depend on?
4
What are the holes in a circular saw rip fence intended for