My uncle gave me a set or carving gouges and chisels that he was not going to use anymore. They need to be cleaned as they have a little bit of rust on them.

More importantly they look like they could use a sharpening before I start using them. Based on other questions I have a good grasp of how to sharpen flat tools but how does that play out with curved tools? The blades of moudling planes come to mind as well. Some of them have very complex forms.

What tips and tricks do I need to know when sharpening curved edge tools? I don't want to have to remove too much material to make up for mistakes.

I don't feel this question really covers this topic: How to hand-sharpen a badly worn gouge?

In addition to the obvious things of striving to maintain the bevel angle(s) and the shape of the cutting edge (many have a curved profile) the conventional advice is to be extremely careful not to put a tiny bevel on the opposite side to the main bevel, the reason given that it can hamper getting a good edge in future sharpenings. Not always stated is that it also changes how the tool will work as it alters the angle at which the edge will bite into the wood.

So for an out-cannel gouge, one with bevel on the outside, which most (all?) carving gouges are, the slipstone or whatever that you use to remove the burr on the inside of the edge should be kept completely flat to the interior hollow if sharpening conventionally.

More importantly they look like they could use a sharpening before I start using them.

If there's any rust at all on the edges, which is very likely, they will definitely need a sharpen before use.

Gouges need to be at least as sharp as normal chisels to work well (i.e. sharper than you need to get a plane iron usually) as they are routinely called upon to cut wood across the grain, with the resultant risk of tearout if the cutting edge isn't quite up to snuff. You want the edge at minimum shaving-sharp if you can manage it.

Method
I'm going to describe an entirely manual method. You can use a grinder to sharpen a gouge but I would be extremely careful about doing this with any high-speed grinder, no matter how fine the wheel fitted is. It's very easy to inadvertently change the shape of a curved edge (you can do it easily enough just sharpening by hand!) and when this happens you'll have the devil of a time fixing it as it involves grinding back the entire edge until it has returned to the right profile. Doing it manually is lots slower, but much more controllable.

You can do most of the sharpening of gouges on the same abrasive paper, stones or diamond plates that you sharpen your regular chisels on, although with many waterstones you do have to exercise great caution to spread the wear as they dish so easily.

The technique is very different to a normal chisel however. There are some variations but a lot of people eventually end up doing some form of sweeping of the edge across the abrasive as they roll the tool, while moving it backwards and forwards (or just in using a pull or push action). This can amount to doing a figure-eight motion on the stone, which actually some guides recommend.

You can also do it just by rolling the bevel on the abrasive as you move the blade back and forth sideways. This is by far the easier method IMO, although you should try some variations and see which motion your hands prefer.

You work the bevel until you can feel a burr along the entire of the edge on the inside, then the next step turns it back over starting the process of removing it. You may need to turn the burr over onto the bevel, then back, rinse and repeat a few times until it's so small that it separates from the edge or just seems to disappear.

If your gouges are basically sharp but just need a touchup don't bother with a coarse or even medium stone, use something quite fine. As long as it'll turn a noticeable burr onto the opposite side of the edge that's fine.

In addition to your main sharpening stuff you'll need one or two bits of specialist gear to remove that burr to complete sharpening of a gouge. This can be any one of the following or a combination:

All of these are generally used by stroking out from the edge (i.e. the tool is pulled relative to whatever you're using) but with any of the strops this is a must-do as otherwise the tool can dig in and ruin the strop.

Once you have sharpened once you can repeat the same process to get the edge back every time, but it's much better to strop to maintain your edge. This way a gouge is nearly never sharpened per se, but instead honed again and again which is much easier and faster. Particularly if you are careful not to leave the interval between edge touchups grow too long this can be done for an extended period, certainly many months, before you might need to sharpen again on your stones.

I think far and away the best system to strop the bevel is to use the gouge to cut its own hone profile into a block of wood. This means it's the exact shape it needs to be, not a close approximation as you'd usually be using if you'd bought a commercial honing block. Plus it will be basically free, which is always nice :-)

*To work the inside of the gouge, you can again use the tool itself to make the convex surface needed, but you may prefer to use the method shown in this article on Popular Woodworking from Yoav Liberman.

Usually tools like gouges are sharpened using a very fine grinding wheel. There are lots of different jigs usually sold to keep the angle consistent while rotating the tool. As with sharpening of flat tools, your mileage will vary if sharpening freehand.

You can also create your own jigs for keeping the angle consistent against the wheel.

EDIT: For smaller gouges, like you'd use for carving, you ought to be able to find sharpening stones at specialty woodworking supplies which are actually grooved to match the profile on the gouge as well.

Ifyou're uneasy about honing gouges freehand,honing guides for gouges can be purchased (Just Google "gouge honing guide"). However, it is very simple to make one that works very effectively. Here are pictures of the one I made. It is too simple to even bother with instructions. The images should be enough. 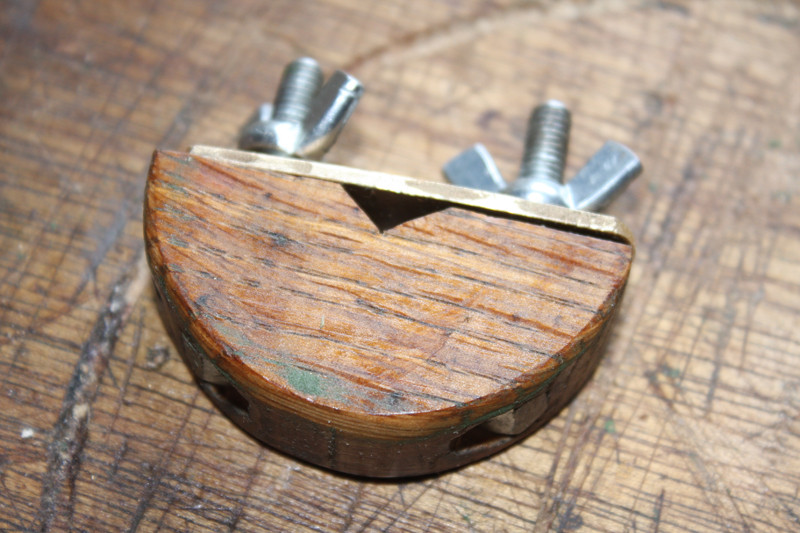 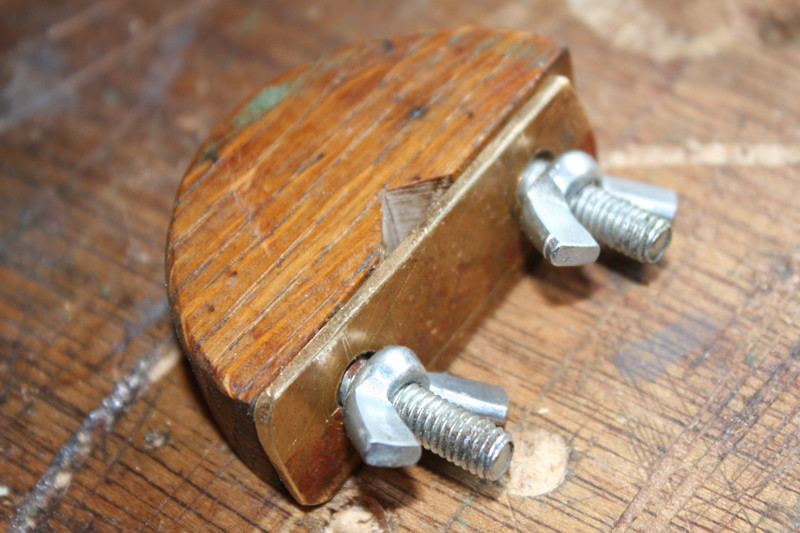 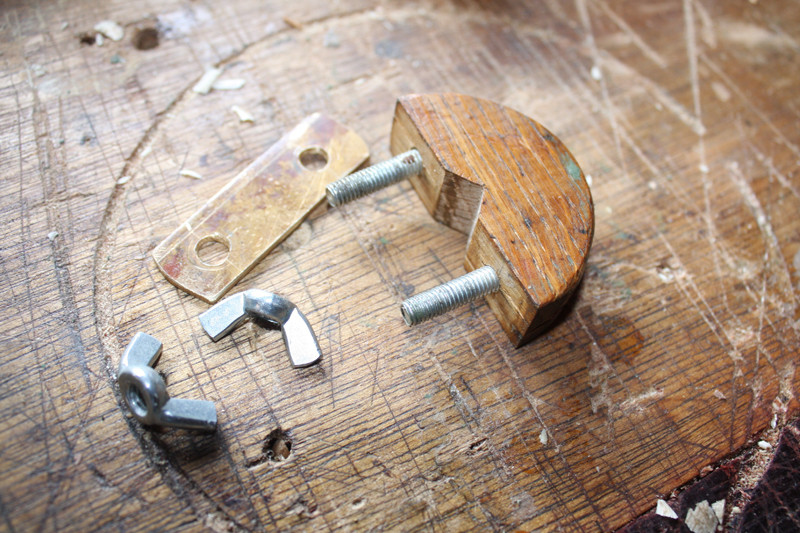 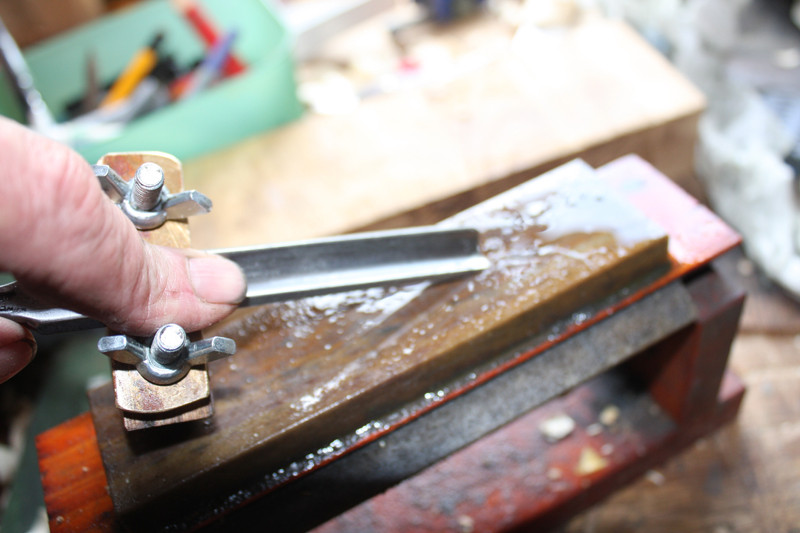 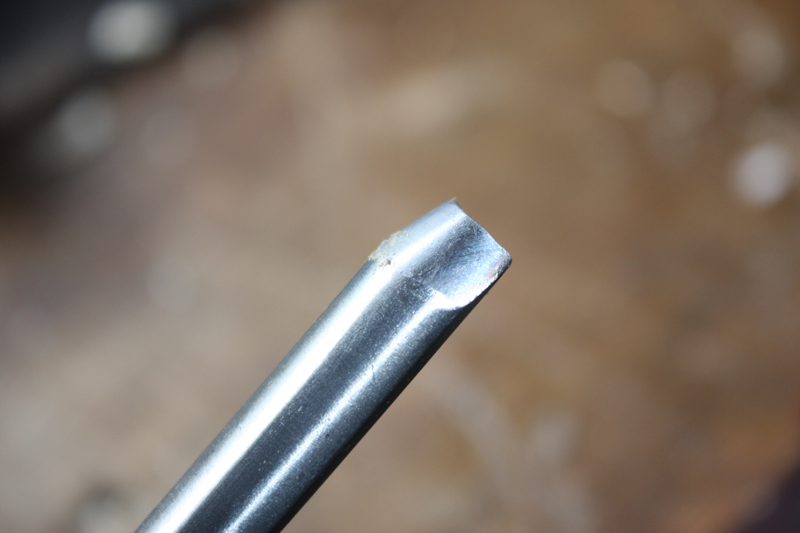 (I would advise against sharpening one-handed. In the picture,I was holding the camera with the other hand).

Like anything, it all depends. Since these are turning tools and not gouges for fine woodcarving, you don't need to worry quite as much about having a perfect edge that will give you a clean shave.

I use a fairly fine grinding wheel to sharpen all my curved woodturning gouges. There are plenty of jigs to help make a 'perfect' grind, however, I do mine all via freehand.

I line up the gouge bevel to be close to flat with the wheel, then I make contact and rotate the gouge spinning along the edge. The more grinding practice you've had the easier this is. I try to get just to the edge, a very light thin orange line (barely seen) and move quickly around. Too much orange and you mess with the temper, which will speed up how soon you have to come back and try again. 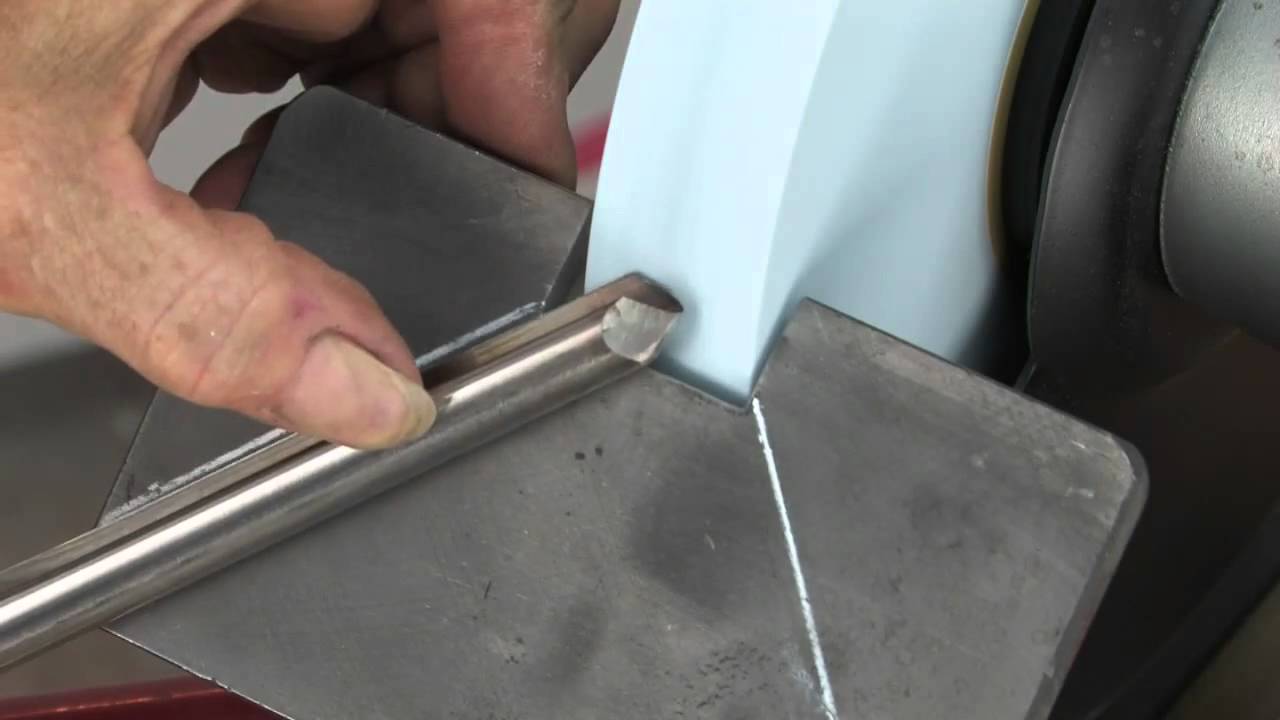 Turning tools need fairly frequent sharpenings to keep the edge working so you don't have to. Because of this you don't want to be spending half an hour honing the edge every time it needs an edge. The grinding wheel is sufficient.

Now if you get to turning very fine items, say like those that turn cowboy hats, when you are getting down to the end and need super sharp tools to take of 1/64" then you might want to spend a little more time honing the edge. 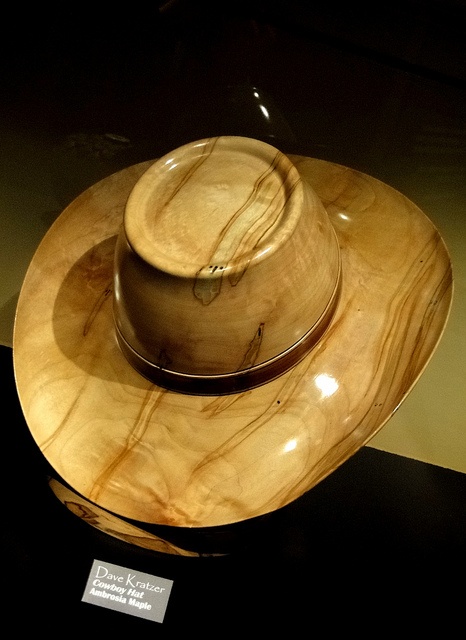 Not the answer you're looking for? Browse other questions tagged sharpening chisel gouge or ask your own question.

11
How to hand-sharpen a badly worn gouge?
6
Routing tight edges/corners
2
What kind of wood is thin enough to cut with a knife, but strong enough for doll furniture?
5
How would I go about recreating this surface?
1
Can I get away with using bonded leather for a strop?

22
How do I sharpen a chisel/plane blade?
8
High grit sandpaper to sharpen a v-gouge
11
How to hand-sharpen a badly worn gouge?
9
Is there a 'best' way to sharpen an edged tool like a chisel?
20
How does one aggressively sharpen chisels and plane irons when damaged?
2
How can I properly sharpen my knives with power tools?
0
Old carving gouges -- why so thick?
4
How many times can I sharpen a planer blade?
5
Is the "paper test" actually relevant to sharpening chisels and planes?
2
How often should I sharpen?