Is there a generic reason to mark work with Roman numerals?

Over the weekend I did some basic repairs to a now lone nesting table. It is about a foot and a half by two feet wide if it matters. A leg's dowels had all broken and it was hanging loose. Also replaced two stretchers that had fallen off and were lost for the same reason.

Up until this point I had never looked at the underside of the table and was perplexed by the presence of Roman numerals on the table. 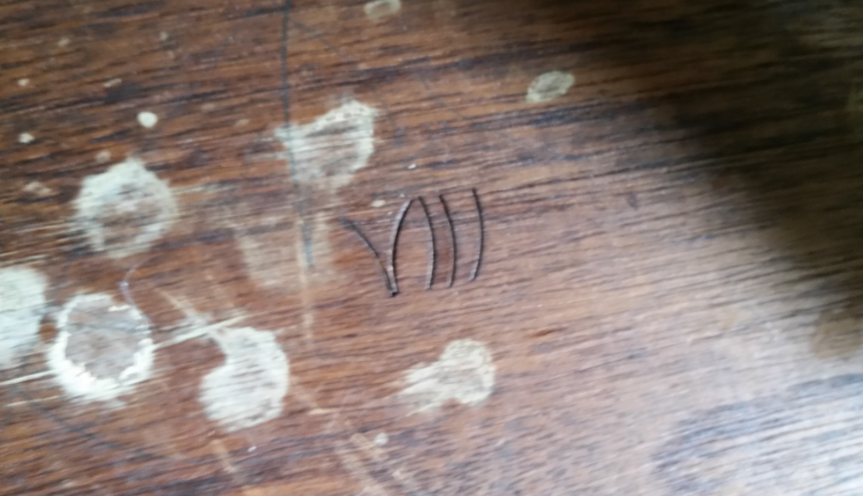 It is interesting. I would venture that the markings are from a gouge that was gently hammered. It would appear that the mark was present before the wood was stained. I cannot come up with a logical reason why this would be there.

What do you think this is assuming it is not a personal practice?

What do you think this is assuming it is not a personal practice?

Marking mating pieces with numerals is standard practice in timber framing, at least in a historic context. These were often called "marriage marks," for obvious reasons. 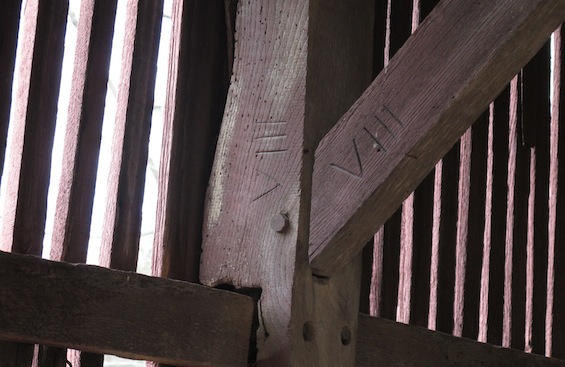 These were an easy way to identify mating components with a standard chisel, which can only make straight lines. Chiseling out the marks would provide an easy-to-see shadow line, unlike pencil or chalk, which would be erased much easier.

Up until this point I had never looked at the underside of the table and was perplexed by the presence of Roman numerals on the table.

Why these are on the bottom of your table is not entirely clear, since it appears that there is no mating piece next to the marks. It could just be that the woodworker used the marks to identify the piece number to keep things straight in his head. Without further context, it's really impossible to know.

I would guess that the woodworker had a curved gouge handy when he made the marks, hence why they're not straight, as they would be if done with a regular chisel.

I doubt its the table ID within the nest. They would all be of different sizes so each would be easy to identify. There likely were not 8 to start with. The first one would be for a doll house.

Gee, maybe it's not Roman numeral 8, but rather 1 of 3, a likely number of nesting tables.

Or perhaps it's the 8th set that the maker produced - a small shop experimenting with getting into the big time.

Or, Matt, maybe the maker is of the same sort of person as you, recycled the wood from another project and the marks have nothing to do with the table.

8
Building A Table - Help With Wood Selection and Joints
16
What is the name of the corner joint with grooves on this chair?
5
Is there a reason not to glue a wooden bolt into its threads?
1
cutting opendesk parts with fretsaw
1
Why do screws usually work well without clearance holes?
3
Is there a better way to join these two boards for a platform bed?
4
Are these work desk joints strong enough?
5
How do biscuits work?
3
Multiple Half-lap Jig for Grid Work
1
How to maintain a straight cutting angle with a tenon saw?