Are some workbench features not suitable for a softwood workbench?

I am hoping that this summer I will get time to make a roubo style workbench. Since I typically work with reclaimed materials I am going to be using top made from pine that I will be laminating. Since I already know its not a bad idea I'm going this route for my first real woodworking bench.

Now likely I will not be going to crazy and will just make a leg vise with a plain flat top. I am considering just using pine for that as well as it is available to me. If the leg vise ends up failing and the wood choice ends up being the crippling factor I can just replace it. Harder to do with a whole bench top.

There are a handful of options worth considering though like bench dogs, hardpoints and even some other vise styles. Issue is I am making a softwood top so it will not be as hard as some of the more typical benches.

Should I not bother with these workbench features as they might not be suited for softwood? Example being I can see a holdfast wearing out a dog hole fairly quickly if used regularly. To clarify I am not concerned with the appearance but functionality of a bench with these features.

Should I not bother with these workbench features as they might not be suited for softwood? Example being I can see a holdfast wearing out a dog hole fairly quickly if used regularly. To clarify I am not concerned with the appearance but functionality of a bench with these features.

I built my Roubo workbench out of southern pine, and I can tell you that it's holding up just fine.

For the holdfast holes, you're cocking the shaft of the holdfast against end grain for the most part, regardless of how you orient the holdfast. End grain is pretty strong in compression, so you don't get a lot of hole deformation, even with a softer wood (FYI, balsa or basswood still might be a bad choice, but who would make a bench out of those?).

The same applies to dog holes. I did mine square, so they bear directly on end grain. The dogs themselves are made of maple. They're holding up just fine.

Now likely I will not be going to crazy and will just make a leg vise with a plain flat top. I am considering just using pine for that as well as it is available to me. If the leg vise ends up failing and the wood choice ends up being the crippling factor I can just replace it.

There's no reason that pine won't work for a leg vise chop. You're more concerned with the stiffness of the chop than the hardness, and pine is plenty stiff given the dimensions at play here (assuming you have a chop that's at least 1-1/2" thick).

Personally, I went with hickory for my leg vise just to change things up. I would recommend using a hardwood on any of the faces of your vises (i.e., where the clamping force gets applied to the wood) since they will hold up longer.

And just to really drive the point home about pine being perfectly suitable for a workbench and having no real limitations, I'd like to mention the Nicholson workbench. 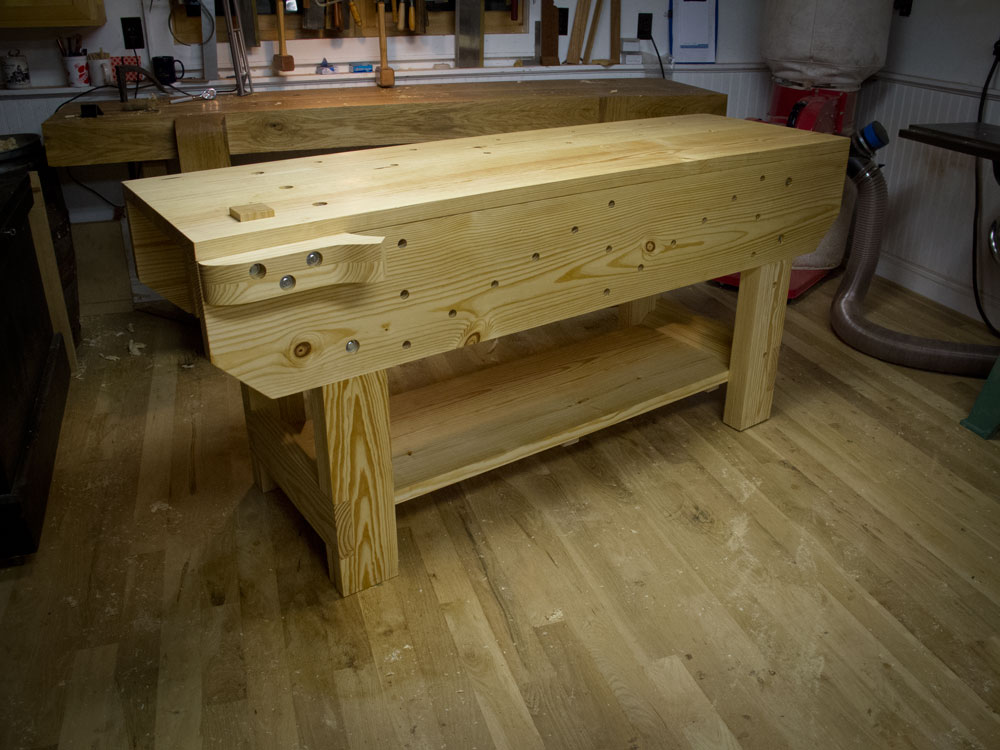 These are designed to be easy-to-make workbenches that will do any chore a woodworker needs. You can see that the top and skirt are made of 2x stock laid flat, and they have no issues with holdfasts.

Bottom line, make the bench out of pine and don't worry about it.

Should I not bother with these workbench features as they might not be suited for softwood?

I was going to suggest in a Comment that a complete list of the features you might like to add would be useful, for replies to be as comprehensive as possible by going through them as a checklist. But actually I couldn't think of any feature that would be precluded because the top is made from softwood. In particular since you're planning a laminated top it will be very very strong and should be more stable than if made from a solid board as was the norm back in the day.

Example being I can see a holdfast wearing out a dog hole fairly quickly if used regularly.

That shouldn't be a worry. There are numerous benches out there now that have solid MDF tops and we can extrapolate usefully from those, since MDF is significantly softer and more friable than pine at the edges. Some of these benches use holdfasts of one type or another apparently without a problem. If I remember correctly what does tend make dog holes wear excessively when used with a holdfast is if they are drilled a little too large. The other major issue is if the top is too thin to properly support the locked holdfast, but that won't be a problem for you.

Now likely I will not be going to crazy and will just make a leg vise with a plain flat top. I am considering just using pine for that as well as it is available to me.

Coincidentally I happened to post a pic in the six-pack of images for this Answer a short while ago that shows a leg vice with softwood chops (faced with leather it looks like), so that's a clear example of it being used. And there are numerous other vices posted online with chops or jaws made from pine/fir/spruce.

Just as an aside, there is wide disagreement in woodworking circles about the ideal material to make vice jaws from.

On the one hand there's hardwood or hardwood ply, cited for strength, stiffness and durability, on the other hand others prefer to use pine or MDF specifically because they're softer — far less tendency to crush or bruise softwood or MDF project pieces.

So up to a point the woods you most commonly work in can drive the choice. If you rarely if ever work in hardwoods it could be useful to have vice jaws made from softwood (laminated for stiffness if necessary). It should be mentioned though that some woodworkers who build vices using hardwoods get around the problem (to some degree) by lining their vice jaws with leather, suede, rubber or cork. In addition to the cushioning effect these all give improved slip-resistance as well, so it's something worth considering regardless of what the vice is made from.

I suspect that for your bench dogs, the big factor will be how thick your bench top is. With oak I suspect you can get away with 3/4" board for a while, though 2" might be better. For pine, I would say a minimum of 2", 3 would be better 4 would be very solid and last a long time (also allowing the top to be sanded flat a few times too!).

The thicker the top and deeper the hole the more the twisting torque is spread out over more wood. Thicker tops help make a more solid and stable work bench as well. I have a book at home (haven't had a chance to read it yet) about building work benches and the different features. I'll see if it has anything to say about this as well.

Not the answer you're looking for? Browse other questions tagged wood workbench softwood vises or ask your own question.

19
How do experts make dovetails by hand that fit so well?
7
Using softwoods for bench tops