Can I really use my table saw as a disc sander?

When looking through a tool catalog from the 1950s I noticed that Shopmaster sold a sanding disc for their table saw. I looked around online and found discs that fit my saw still available, e.g. here is a balance blade that you can also stick sandpaper to, and there are many others: 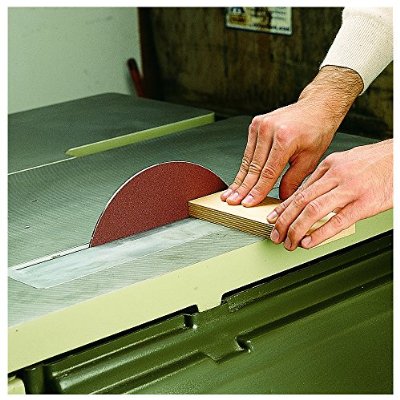 I had no idea this was a thing. Can I reliably use my table saw as a disc sander? The RPMs seem higher than a typical disc sander, and also would I run a risk of burning out the motor if I ran it too long? I mean, I know the table saw motor is pretty heavy duty, but it doesn't seem like it was designed to run in the same manner that a disc sander motor runs (long periods of time, low or no load).

I've always wanted a disc sander - I have no stationary power sanding tools right now - but don't have the space for one. What am I risking by using the table saw with a sanding disc?

would I run a risk of burning out the motor if I ran it too long?

As to running the saw for a while, that shouldn't be a problem if it has adequate ventilation. Electric motors run best when run continuously (minimize start/stop). Using it for sanding will probably be a much lower load than ripping wood stock.

What am I risking by using the table saw with a sanding disc?

The only issue I can see is that you have to press the work against the sanding disk, which would cause bending in the table saw arbor. Though table saw motors are pretty hefty, I don't really know if this would be an issue or not. If you made a sanding disc out of a more flexible material (say, 3/4" plywood), it probably won't be an issue.

Edit: YouTube to the rescue again. Here's a video showing this technique.

At the end of the day, I'd rather ruin a (relatively) cheap dedicated disc sander than an expensive table saw.

Off topic, but this works quite well, actually.

I have one that came with my table saw (a 1980's Masport). It's a combo table saw, sander and jointer. Masses of steel means is heavy as crap and a nice powerful motor make this my favourite table saw ever: 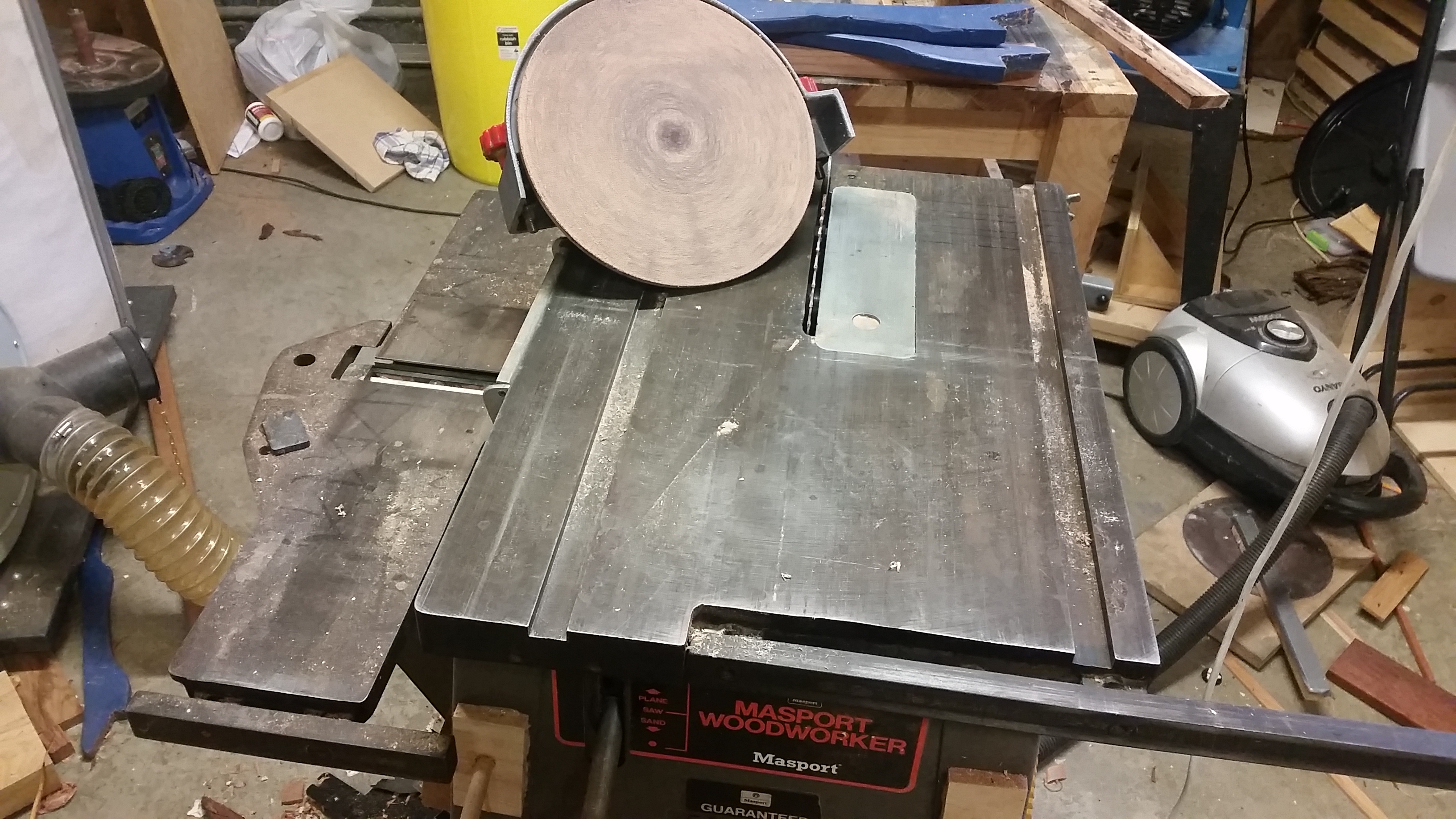 The disk sander attaches directly over the blade (blade stays in place) and takes only a few seconds to put on/take off.

Both the saw and disc and joiner are all belt driven, but as the disc sander runs directly off the saw arbor it's running at exactly the same speed as the saw. I've never noticed any issues speed wise.

Pressure wise, the disc is held in place by it's metal shell - this will drive any horizontal force back into the the tabletop instead of allowing it to put any pressure on the arbor.

I've had no issues running it for long periods of time, and would suspect it's probably better for the engine than cutting thick wood - there would be far less load.

A bonus is that the DC set up for the table saw automatically works great for the disc sander!

I had no idea this was a thing.

Neither did I until I read about it in an older publication.

The reason it's seen less today I presume is due to the lower cost of dedicated machines, similar to the disappearance of profiling bits for drills once routers became cheap enough that the average home woodworker could afford them.

Can I reliably use my table saw as a disc sander? The RPMs seem higher than a typical disc sander, and also would I run a risk of burning out the motor if I ran it too long?

Given people have used power drills to run sanding disks and sanding drums quite effectively (going back quite a ways too, with much less powerful motors than we see today), and those motors are not intended for extended continuous operation, it seems likely burning out the motor is not an issue even theoretically if using a table saw for the same purpose. And on a practical level this was a common mod to do to table saws some years ago, as tips in woodworking books and some magazine articles testify to.

So I doubt there's any reason to worry about burning out the motor, but there is a risk of burning the wood, especially once the paper wears down (not even enough that you'd look at it and say to yourself "That needs changing.")

Notwithstanding any reassurances as a table saw is a major piece of equipment that you might not want to take a risk with, consider making up a drill-powered sanding station instead:

Not the answer you're looking for? Browse other questions tagged table-saw power-tools sanding or ask your own question.

11
Can I effectively use a table saw to straighten warped lumber?
14
In what situations would I use a belt sander versus a random orbit sander?
12
How can I bring an old, disused table saw back into active and safe use?
3
Coping with uneven table saw table and inconsistent cut depth
6
Random Orbital Sander rounds table edges
3
Why a 5hp 14" table saw?
2
Table saw, possible replacement queries
5
How can variable speed be used on a random-orbit sander?
0
What does "Depth Control = No" on a table saw mean?
1
What's the impact of blade RPM on a table saw?