What joining methods would be best for the legs and other areas of a height adjustable desk?

I am working on building my first piece of furniture. I decided to go a bit big and went with a height adjustable desk. I have the linear actuators and the electronics figured out. Today I purchased maple for the inner and outer legs.

What I am trying to figure out is what joining method/implement would work best in constructing these legs. In the linked design (above) for the desk they use butt joints and they use screws to construct the legs. But I was wondering if it would be better if I used wood glue.

To fit the actuators, I am using 1x4's for the inner legs and 1x4's plus 1x6's for the outer legs. I want them to be strong and sturdy.

In the linked design (above) for the desk they use butt joints and they use screws to construct the legs. But I was wondering if it would be better if I used wood glue.

For some joints screws can be stronger than glue, but where face grain meets face grain a properly done glued joint is stronger than the wood itself, so not much need to reinforce that :-) In some cases it would be better to use both, a glued and screwed joint can be much more secure than either used alone.

So for the columns the legs rise in I'd go with glue only.

Where I would probably retain screws is on the angled braces. They would very likely be more than strong enough if simply glued in place, but no harm in reinforcing. If you want those braces to be removable though screws only of course.

Deck screws should be fine. They may be overkill in terms of size (gauge) and/or length, you could very likely use basic wood screws without the result being weakened enough to worry about, but it's rare to regret going too strong instead of the opposite!

Because you're using a fine-grained hardwood it's advisable to pre-drill for the screws.

Although some woodworkers seem to be pathologically opposed to using screws in 'proper' woodworking jobs I have no issue with them myself, but, with few exceptions I don't like seeing screw heads on the finished job and they'd remain plainly visible if you just countersink them. So I'd do counterbores myself. 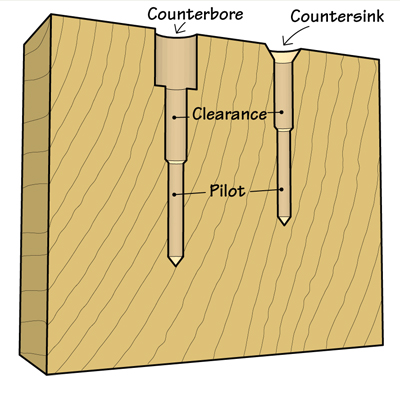 The small hole that the screw head hides at the bottom of could be filled with fillers of various kinds, a long-grain wooden plug or dowel (showing end grain), either to try to blend in or in a contrasting colour or grain if you want to make them more decorative. To make most of a feature of them use a turned wooden cap, AKA "mushroom buttons":

In addition to their decorative value these have a practical advantage if you haven't glued the respective joints. They can easily but levered from the hole, giving access to the screws should you need to do any adjustments or break the table down into its constituent parts for moving. 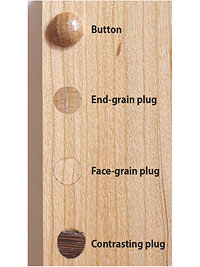 9
Are there specific types of screws I should use for woodworking?
5
What join to use to join 2X4s for a pedestal
6
Building a wooden arcade stick case
6
Is it a problem if my countersink bit is slightly larger than it needs to be?
3
Best way to hide counter sunk screws
5
Are barrel nuts strong?
2
Handrail coming away from wall

6
What is the strongest join for splayed legs?
8
Attaching Legs to a Table
4
What are the name and origin of the woodworking style used for this wooden cabinet with rounded features?
7
What are the minimum, maximum, and optimal depths for dadoes, grooves, and rabbets?
6
What is this plywood joining mechanism and hardware for knock-down furniture?
1
What would be the best glue to use for papermaking frames that are immersed in water & made from pinewood
2
Reusable Desk design: how to join pieces?
3
Shelves inside cupboard, how to attach to legs?
2
Is this frame design sturdy enough for a window seat?
1
Edge joining three 6' 2x10" and 4 sturdy hairpin legs for a dining table, is it sturdy enough?