I recently made the main body of a box by taking a solid piece of wood and drilling out the inside with the largest drill bit I had.

I used the drill over and over until I had a squarish hole inside by accumulation of round holes. Then I took a chisel to the inside edges to knock off chunks. Finally I dremmeled and sanded. I didn't have a perfect cube of air inside my cube of wood - but it wasn't too bad. Just a lot of work and it felt amateurish. There must be a better way.

There are multiple ways this might be done, going back to a stone-age method where you'd burn out the hollow, but there are two main methods I think would be employed today depending on the philosophy or preference of the individual.

'By hand'
The first manual method is actually exactly what you describe doing: drill out the bulk of the material and then clean up with a chisel (followed by use of hand-held router if a flat bottom is desired). So it is not an amateurish method at all. For example on almost all craftsman-made traditional oilstone boxes the recess for the stone was created in exactly this way as can be seen if you lift the stone: the flat bottom will almost invariable be peppered with holes from the lead screw of an auger or the spur in the centre of a Forstner bit used to hog out most of the material.

Boxes were not commonly made this way in the past, but square recesses or let-ins were; for lock bodies, hidden compartments and for mortises in mortise-and-tenon joinery of course, and I think it's likely this would have been one of only two methods used.

The only main difference today is that most would use a power drill to do the drilling, although doing it with a brace is still just as viable.

The other main manual method is pure hand work, that would be to cut the hole by chisel only. Obviously this represents a lot of effort and it's by no means the best way, but it is feasible if it was the only option open to the woodworker.

Router
Today of course we have power tools so it's likely that a lot of modern-day woodworkers would choose to use a router for this.

There's more than one way to do this with a router. Firstly careful freehand work could be used to remove most of the wood, followed by clean up with a sharp chisel or two just as if you'd drilled many holes. Secondly by running the router against a number of battens or straightedges clamped firmly in place. And thirdly by creating a template which a bearing on a suitable bit would ride against, allowing the cutting of the full shape in one operation. In the second and third case round corners would result, which could be left if liked (not just for aesthetics, they make the corners of the box stronger) or squared up with chisels if preferred.

In case it needs to be stated if a router is used especially on a small box the workpiece must be very securely held to the table as the potential for it to be launched across the shop is high.

Note: for best results it's best to gauge or knife the perimeter of the recess to help ensure a clean, crisp edge is left after work. Even using a router this can help but it's almost mandatory when using hand methods.

"Cheating"
There's another method to consider if it wouldn't harm the aesthetics as you see them: make the body of the box in two pieces.

One of the main challenges with this is forming the flat bottom, this method sidesteps that difficulty entirely. The main body of the box is one thicker piece of wood which you can drill straight through. After you're done cleaning up the edges you simply glue on a thin piece of wood for the base.

If you want it to look like the box was hollowed this base piece is sawn from the wood used for the body, and with some luck with the grain directed and care taken with the glue-up once glued back on the join can be virtually invisible. This is slightly easier on darker woods, more difficult on light-coloured woods.

The "bandsaw box" approach: cut a thin slice off the bottom of the piece, then make a cut in from the side and around the opening you want to create. The small cut in the side can be glued closed, and the solid bottom can be glued back on, almost indetectably.

Or: cut off the bottom, drill a hole through, feed a coping saw through the hole and cut outward rom there to remove the core without making that cut through the outside edge, and glue the bottom back on. 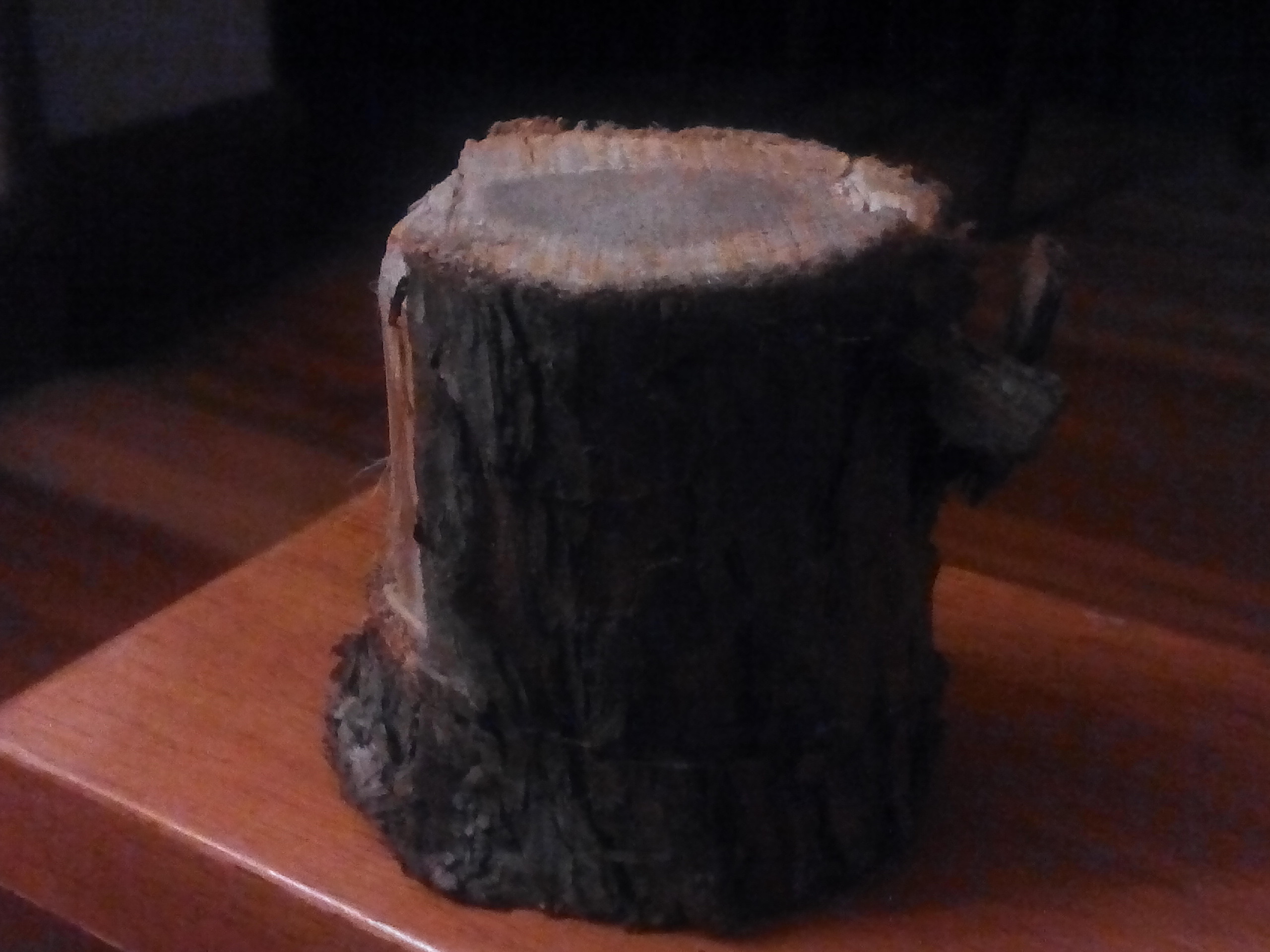 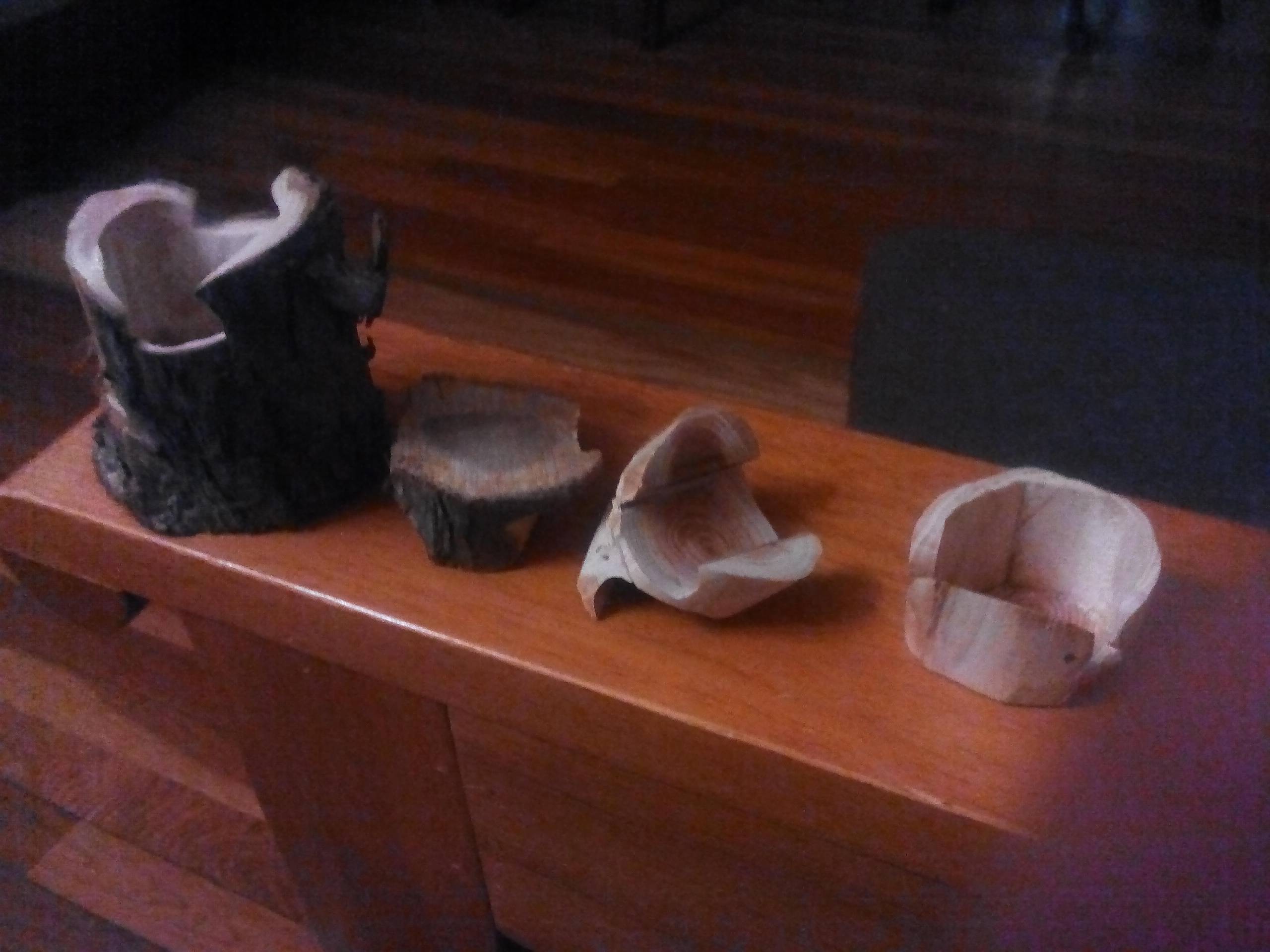